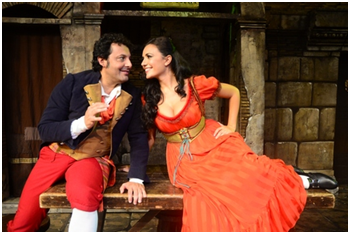 in a scene from Rugantino

Rugantino is a beloved perennial in Italy which has not been seen in New York since its three-week sold-out run on Broadway in 1964, which proved to be a costly flop. It was done then, as now, in the Romanesque dialect of Italian with English subtitles, which might have been a factor.

Writers Pietro Garinei and Sandro Giovannini teamed up with composer Armando Trovajoli for this show. It’s set in 1830 Rome, and the plot revolves around the title character, a prankster in the tradition of Arlecchino (Harlequin), though perhaps with the more brutal humor of a Till Eulenspiegel added to the mix. For example, one of his jests is to toss a coin down to some street serenaders after first heating it red-hot over a candle; another is to toss a dead cat into a funeral chapel.

The primary story has Rugantino (Italian comic Enrico Brignano) seducing married Rosetta (Serena Rossi) on a bet. He spends Act 1 in pursuit, and at the top of Act 2 he succeeds. Then he decides that since he really likes this woman he will keep his mouth shut and lose the bet. This makes her happy, but his resolve only lasts until his pals start taunting him about not being a “real man,” at which point he get enraged and spills the beans, and, of course, Rosita overhears, and, of course, he loses her. He spends most of the rest of Act 2 trying to get her back.

The secondary story is about how his ex-girlfriend Eusebia (Paola Tiziana Cruciani) supports him by becoming the concubine of a succession of wealthy men (who are told Rugantino is her brother). Rugantino hooks her up with his old friend Mastro Titta (Vincenzo Failla), the chief executioner, which is wrong because, first, the executioner’s long-gone wife is probably alive, and second, nobody tells Eusebia that Titta is a headsman.

The two stories come together in the denouement, where Rugantino is accused falsely of murdering Rosetta’s husband. Rugantino is surprised to find himself looked on with respect, not just by his mates but by Rosetta as well, and this respect is so compelling that he doesn’t deny his guilt, even though it brings him to the guillotine in the final scene…operated by his old friend Titta. That’s a great story concept; the only problem is that it’s merely tangentially related to the three hours preceding. It would be unfair to dismiss it as kitsch, because the light parts don’t take themselves seriously, and the grave parts don’t get preachy. 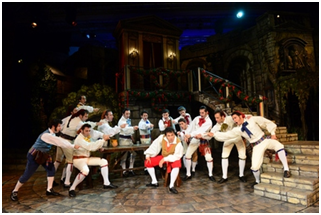 Enrico Brignano (center) and the

male chorus in a scene from Rugantino

The cast is full of terrific comedians, most of whom are well-established television and movie stars back in Italy–at least three or four received entrance applause. Watching Brignano in the lead (who is seldom offstage for long) was like watching Sid Caesar in his prime. But they’re not especially great singers, and that’s a bit of a problem. The music is obviously beloved by the Italian audience, which applauded in recognition at the beginning of the Act 1 finale, “Roma, Non Fa La Stupida Stasera,” but the quality of the music was curiously divided. The instrumental interludes were vivid and colorful, with interesting harmonies and melodic turns. The songs, in contrast, were comparatively bland, with mostly simple stepwise motion. This made them dependent on the vocalists to make a strong effect, a challenge that was not always met. Even the Serenante (Andrea Perrozzi) sounded more like a modern thin-voiced singer of pop songs than an old-fashioned, full-throated, soul-stirring balladeer.

The Thursday performance ran three and a half hours (with one intermission), which was really very long. The most obvious bloat was the semi-improvised clowning (lazzi), such a scene where Rugantino is impersonating an artists’ model, or where he is forced to eat the dead cat previously mentioned. At these times Brignano hammed things up in the tradition of many a classic comic (Zero Mostel came to mind), and although it kept the audience laughing, it could have been cut by several minutes. (The director may have agreed, because the Friday and Saturday performances were reportedly half an hour shorter.)

If you don’t know Italian–more precisely, the Romanesco dialect–you miss most of the humor. There are a lot of dialect jokes, puns, misunderstandings, and so forth, and the subtitles were just good enough so that you knew when they weren’t good enough. Years of attending Italian operas were of little help. The artist’s studio scene just mentioned gets a lot of mileage from the artist having a thick German accent. Something about the difference between the way Titta and Eusebia speak had the audience in stitches, but it’s not clear to non-Italian speakers just what it was. The program included a synopsis which was too short to be useful, and some of its condensations were misleading.

The production used a taped orchestra, as well as some taped backing vocals. While this is objectionable in principle, for some of the dance sequences it wasn’t too obtrusive. In the ballads, on the other hand, the sight of the actors adjusting to the track, obviously timing their ‘expressive’ phrasing to make sure they never got out of sync, often sucked the life out of the material.

For the record, the promotional materials claims “70 performers,” but the program lists only 34.

The set was very impressive, with concentric turntables that you won’t see elsewhere in town outside of the Metropolitan Opera. There is no director credited except the original creators and Enrico Brignano himself for mise-en-scene. This seems appropriate, as the production is one in a long line of clones, nearly identical to 1980 and 2001 mountings that can be found online, not just the sets and costumes but the blocking too.