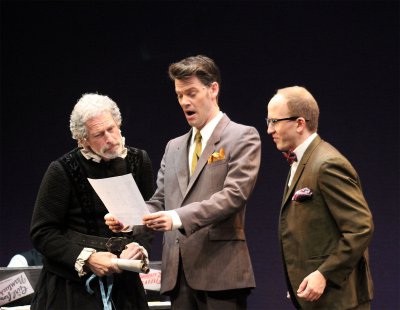 Bruce Rebold, Ryan Knowles and Prescott Seymour in a scene from the musical “What Do Critic Want?” (Photo credit: Nick Tighe)

Who is daring enough to walk a mile in someone else’s shoes before they pass judgment? Anyone? Well, how about if you were forced to? That might change your mind.

The new musical, What Do Critics Know? presented by MWG Productions, LLC, in association with the New York Musical Theatre Festival, with book written by Matthew Gurren, put the shoe on the other foot as three renowned theater critics, hailing from The New York Times, The New York Post and The Tribune were challenged to create their own hot ticket musical after dashing the dreams of several Broadway shows with their reviews. After all, they’ve (proudly) closed several shows and know what it takes to create a best seller. What can go wrong?

Under Michael Bello’s direction, the lead characters all offered strong acting and depth, as vulnerability broke through tough exteriors. Broadway writer, Nathan Wood (Chris Gleim) has struggled to find his next hit and is reluctant to accept an opportunity presented by theater critic, Irma (Mary Mossberg), with whom he has a past, to create a winner with “The Weathered Storm.” Gleim’s Nathan was always honest in his performance, sharing his frustrations and working to believe in his talent again, which he found with the help of Mossberg’s Irma. Remembering the people who they ultimately were on the inside was the saving grace for their show and relationship, breaking down their strong and stubborn personalities.

Their competition, her colleagues in the theater world and pains in Wood’s side, critics Chester (Ryan Knowles) and Brad (Prescott Seymour) enlist the help of actors from the local renaissance fair, the loony Shakespeare (Bruce Rebold) and Bach (Jason Fleck) to create the musical “Loretta and the Cabin Boy” and convinced beloved actress Lina (Kimberly Doreen Burns) to take center stage. All are at the mercy of an anonymous “backer” (Danny Bolero) who blackmails the critics into experiencing what it takes putting on a show, in the hopes of finding out just how much they actually know.

The three theater critics (Mosberg, Knowles and Seymour) made to represent the iconic judges in the Broadway world from top publications, were quite the bunch. Their portrayal definitely brought life and a human face to those names readers see in print. Their bold personalities blended well together as two were more stoic and logical and the third was comical and eccentric – making for many laughs and satirical moments. 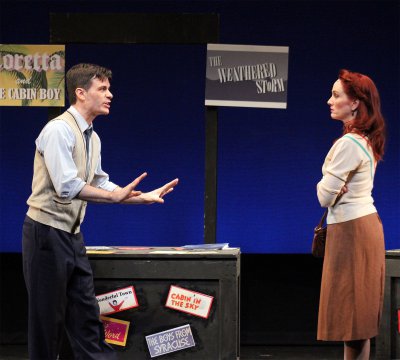 Chris Gleim and Mary Mossberg in a scene from the musical “What Do Critic Want?” (Photo credit: Nick Tighe)

Featuring catchy tunes such as “Breakthrough” and “Talk to Tony” as well as inspiring ballads such as “The Life I Was Meant to Live,” What Do Critics Know? went beyond the criticism and pressure of the industry to uncover dreams that were once put to rest. The music and lyrics by James Campodonico and bookwriter Gurren were uplifting, powerful and beautifully performed and the lovely voices of Mossberg’s Irma and rising star Dahlia (Sarah Stevens) really brought the heart of the production home.

Choreography by Justin Boccitto featured tap dance as well as upbeat group numbers. At times, it looked like performers could have used a little bit more space onstage – but their enthusiasm never wavered. Set design by Anne Sherer featured simple props indicating where a scene took place – such as signage for the Stage Door and the Starstruck Supper Club, where the critics met for drinks after a show and where Nathan and some of the actors worked in between productions. Costume designer Christopher Vergara relied on classic and neat ensembles to evoke the professional and respected demeanor of the critics and also kept it understated for the actors, with skirts, sweaters, jackets, paired with heels or elegant dresses for the musical numbers, almost calling to mind the now charming fashion of the 1950’s.

The idea behind What Do Critics Know? was an interesting one and definitely makes an individual think twice before criticizing something or someone. It also brings the question of “what makes an expert?”  to light as someone may think he or she can do a better job than a performer or athlete, but in reality has no idea what it takes. A desire to understand and appreciate the process and the endless hard work before you make a comment is highlighted, which most people don’t even consider. The concept was fresh, fun and most of all – eye-opening.

For tickets and information call (212) 352-3101 or visit http://nymf.org/whatdocriticsknow

Running time: 1 hour and 45 minutes with an intermission

Think you know it all? Think again! What Do Critics Know? throws down the gauntlet as three esteemed theater critics feel the pressure to put on the hottest musical that this town has even seen! They have no problem dishing it, but can they take it?