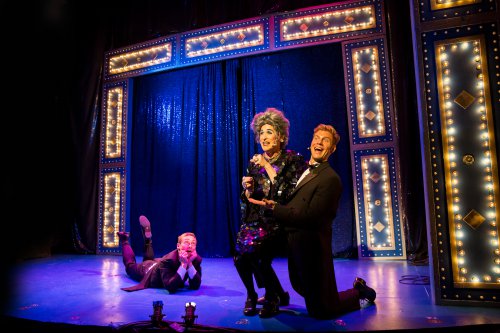 Two and a half years ago, vaudeville musical star Mrs. Smith lost her cat Carlyle and as a way of advertising for his return, she has returned to the stage in a delightfully wacky new cabaret aptly called Mrs. Smith’s Broadway Cat-tacular. Backed by her “Broadway Boys” Brandon Haagenson and Ken Lear (“stolen from Bernadette Peters”), the “all singing, all dancing” show includes 17 of the most popular Broadway songs from Gershwin to Kander & Ebb and ABBA. Including puppetry, video, Skype and audience participation, Mrs. Smith’s Broadway Cat-tacular is an entertaining and light-hearted show, perfect for the summer fun.

Of course, Mrs. Smith is the marvelous creation of writer/actor/performance artist David Hanbury and director Andrew Rasmussen, based on a character created by Hanbury, who has played Mrs. Smith in four previous shows with a Broadway version promised for the near future. The evening is a show business parody with Mrs. Smith narrating the story of her life (childhood in upstate New York with Carlyle, talent show winner, Ziegfeld star, her 14 marriages,  international touring artiste, Pat Nixon’s Birthday Bash, and retiring when Carlyle went missing.) Along with the video footage of Mrs. Smith’s life are Skype hook-ups with Sylvia Cleo, “Pet Psychic to the Stars” (played by Andre Shoals) and appearances of Carlyle as a puppet as well as on film. 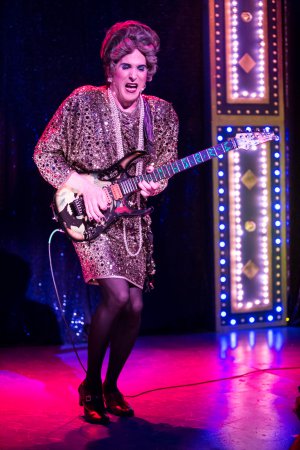 The entertaining musical numbers in solos and trios with The Broadway Boys include such iconic songs as “Broadway Rhythm,” “Cabaret,” “One Night in Bangkok,” “Ladies Who Lunch,” “There’s No Business Like Show Business,” “Diamonds Are A Girl’s Best Friend,” and “Don’t Rain on My Parade.” In addition is the revised “The Cat That Got Away” as well as songs that indicate Mrs. Smith’s many moods: “Knowing Me, Knowing You,” “I Can’t Do It Alone,” “Say Yes,” and “Do You Wanna Dance.” Although there is only a cast of three, director Rasmussen has been able to fill the stage as though there were a cast of dozens both with clever, inventive staging as well as various combinations and skits.

The talented Haagenson and Lear are game for the singing, dancing and comic elements of the show, with Haagenson occasionally appearing at the piano. Mrs. Smith’s fabulous array of costumes and wigs are uncredited but she often changes her colorful and eye-filling costumes while we watch the satiric video or while The Broadway Boys have the stage. The sophisticated lighting is the work of Alexander Fabozzi. As Mrs. Smith, David Hanbury is a bigger than life creation who could hold the stage with a one-person show. Mrs. Smith’s Broadway Cat-tacular which is actually playing at Off Broadway’s 47th Street Theatre is a show business cabaret which will delight theatergoers with both its musical and comic interludes.

Running time: 85 minutes including one intermission