The Wrong Man is a new musical by multi-platinum songwriter Ross Golan with Hamilton’s director Thomas Kail. Like Hamilton, it began as a concept album and grew into a stage performance. Unlike Hamilton‘s epic sweep of history, this subject is contemporary and has a narrower focus, following the fortunes of one man, Duran, who is down on his luck in Reno, Nevada. The intimate setting of The Robert W. Wilson MCC Theater Space’s Newman Mills Theater is a good place to show off the production.

There is no spoken dialogue. Does that make The Wrong Man a modern opera or a dramatic concert? It’s difficult to categorize. However, the story that Ross Golan devised is told entirely through the poetic lyrics that he wrote, to the music that he composed – a triple threat. It means that one has to concentrate a little more than usual for the dramatic intention to become clear. At first, there’s little about this guy, Duran, that might make an audience care. He’s just struggling to get by, and seems to have a lot of bad luck – but even a loser doesn’t deserve to be arrested for a murder he didn’t commit. The clever, unexpected twist of plot ratchets up emotional investment.

The music includes a variety of styles, more rhythmic than tuneful. Sometimes a song seems ethnic, for instance, the way the mandolin might give an Italian feel. The songs are often subtle, but rich, which suggests that listening to a cast recording could reveal layers and additional aural discoveries. No doubt the music is enhanced by the arrangements and orchestrations of Alex Lacamoire. But the best reason the songs work is because they are sung-through by the extraordinarily talented Joshua Henry who plays the main character, Duran. Henry is on stage and singing during most of the performance in this intense role. He has a glorious voice and is a powerhouse of emotion and stage presence; his vocal stamina is astonishing. If you saw him as Billy Bigelow in the recent production of Carousel, then you may be aware of his abilities. If not, then you’d better get to the MCC Theater Space before this limited run is over. 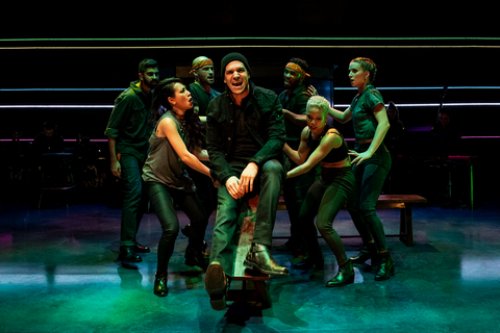 Ciara Renée, who has a clarion voice and a contemporary sexiness, provides a good dramatic match for Henry. And Ryan Vasquez, who plays Man in Black, creates a strong character – one of those you love to hate. (He plays Duran during specific performances during the run and it would be interesting to see him in that role.)

Similar to Hamilton, there is always movement. Is this director Thomas Kail’s signature trait? It’s an effective, creative staging technique that provides a cohesiveness as well as non-verbal clues to the action. Sometimes it’s the moving of chairs that indicates a change of location, or synchronized gestures by the small, diverse ensemble of actors. Occasionally, it’s paralleled action or comment through the sharp, taunt choreography of Travis Wall performed by the excellent, trained dancers, Tilly Evans-Kruger and Kyle Robinson. The stage never seems completely still.

The minimalist set, designed by Rachel Hauck, is in place as the audience enters, with no curtain. At the center back is a glass booth where the drums can be seen (and perhaps heard less). Next to it are the chairs for the musicians who play a variety of instruments. There are risers on two sides for audience members, and the back walls on three sides are striped with neon lights that artfully change colors and patterns throughout the performance. The few moveable chairs and benches are the only physical props. Otherwise, the playing areas are created by the dramatic use of highlighted light, shadow and spotlights, designed by Betsy Adams. 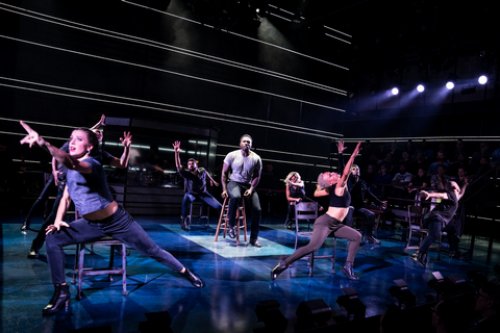 The costumes by Jennifer Moeller and Kristin Isola have an off-the-street, everyday sensibility that fit well with the story and characters.

This pared-down, spare production may not be for those who prefer glitzy Broadway shows or old-fashioned book musicals, but it is for Ross Golan fans, for those who admire theatrical craftmanship, for those who may want to keep current in theater trends, and especially for those who will want to say that they saw this very special bravura performance of Joshua Henry.