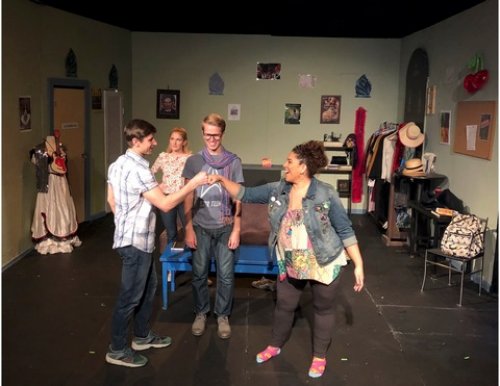 The green room—rarely green, sometimes not even a room—is the theater world equivalent of a living room or a dining room or even at times a bedroom.

In the new(ish) musical, The Green Room, the eponymous space is all that and a clubhouse to boot.  Written by Rod Damer and C. Stephen Foster with songs by Chuck Pelletier, The Green Room follows four undergrads who live only for appearing on stage in college productions at the expense of their other academic endeavors—and their social lives.

The four characters are followed up through their graduation year in which they are oddly joined by Cliff despite his being a year behind them, a fact briefly blown through in the dialogue.  This last year is fraught with tension.  They have to perform senior scenes and pass non-performance related courses such as theater history and philosophy.

Anna and John become lovers.  Cliff throws himself at Divonne and his persistence pays off when they become lovers, too, a situation complicated when Divonne believes she is pregnant.  She is beside herself with angst.  Cliff is boyishly zealous about becoming a daddy, reality be damned. 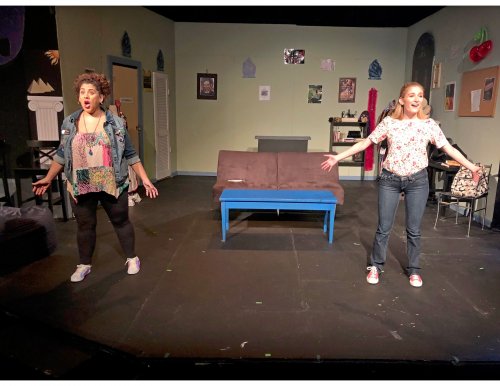 Ariana Valdes and Sami Staitman in a scene from the new musical “The Green Room” at the American Theatre of Actors’ Sargent Theatre (Photo credit: S. Scott Miller)

These four characters are, unfortunately, not interesting enough to fill a 90-minute musical, especially one that covers territory better served by other shows like A Chorus Line, Fame and Merrily We Roll Along, all superior to the earnest, but predictable Green Room.

Even the crisis that drives the play—will Anna wear a revealing costume in Cliff’s play?—is laughable nowadays when nudity is common.  Cliff’s play is backed by his—and Anna’s—Dad with the proviso that all four pass their courses.

They all depend upon each other to study, but leave everything to the last minute.  Even when it’s likely that they will pass, Anna’s refusal to wear a skimpy costume, one it turns out that even a high school participant in the Jimmy Awards would find modest, is a red herring that is soon resolved.

Pelletier’s songs are pleasant and to the point, although several come close to resembling more famous ones like “Our Tme” from Merrily, here “Waiting in the Wing” sung as the foursome goes off to New York City and off-Broadway fame; and “Destination Stage Left,” a simpler version of Chorus Line’s “What We Did for Love.” 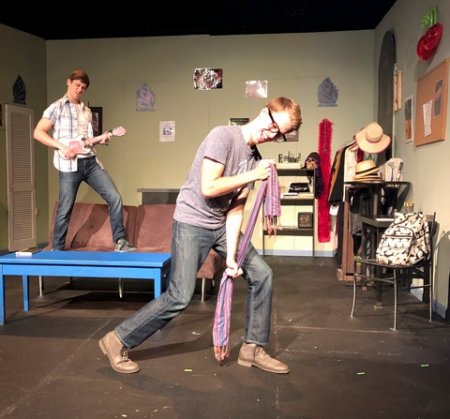 Corbin Williams and Eli Douglas LaCroix in a scene from the new musical “The Green Room” at the American Theatre of Actors’ Sargent Theatre (Photo credit: S. Scott Miller)

Cliff has a zippy number, “Nothing Can Stop My Boys,” a paean to his sperm count, and Divonne movingly vents her inner battles and insecurities in “It’s All About Me.”  There’s a pastiche blues number, “Do Me Blues”; a scene-setting ditty, “in the Green Room”; and the song that frees Anna to don the aforementioned dirty garment, “I Wanna Go to Extremes,” all effective, but not scintillating.

The show has the aura of an old Mickey and Judy, “Let’s Put on a Show” MGM film with none of the spunk or wit.

What partially saves The Green Room are the full-out performances of the lively cast.  They are helped by the un-credited realistic, detailed set that is messy but homey.  Neither is the lighting credited, but it certainly provides needed ambiance.

David Fletcher, the music director, provided further support with his full-out conducting of the genial score.

Jessica Jennings, the director and choreographer, could pep up the tempo of the show and not have her non-dancing cast members perform slightly awkward movements.  She has achieved their full dedication, even if they could try for more subtlety.