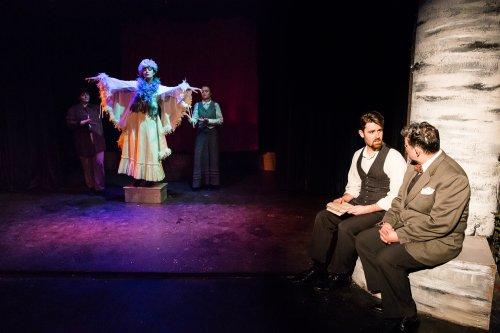 “What Is This Thing Called Love” sung as a duet by Nina and Treplev from The Seagull is one of the marvelous highlights of Mr. Chekhov and Mr. Porter. Another is “In the Still of the Night” sung by The Three Sisters with a touch of Busby Berkeley while a man (the dynamic Demetrius Blocker) dances wearing a hat topped by a Russian cathedral spire and holding a picture book of Moscow. Then there’s Trigorin and Nina from The Seagull singing “After You, Who?” together.

Conceived by Regan Vann Batuello and developed by Janet Bentley and Andy Evan Cohen, Mr. Chekhov and Mr. Porter combines excerpts from Anton Chekov’s four classic plays with iconic songs by Cole Porter.  The approach is fresh and appealing but the results are mixed.

“Well, Did You Evah!,” “I Concentrate on You,” “Night and Day,” “It’s De-Lovely,” “Begin the Beguine” “So Near and yet So Far” and are among the two dozen Porter standards and rarities that are also included.

The first act is a faithful and skillful hour-long condensation of The Seagull. The second act is a clever hour-long vaudeville-style amalgam of The Cherry Orchard, Uncle Vanya and The Three Sisters in the detailed manner of one of Mel Brooks’ cinematic parodies. 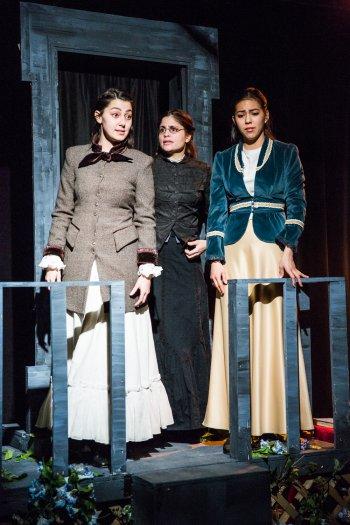 The first act is more fully realized and could stand alone with slight extension. The second act comes across as a truncated mashup and is not as satisfying.  Separately they each have potential as witty entertainment but joined together their impact is diminished. The periodic frothiness dissipates over the two and a half hour running time with an intermission.  Still, the company joyously performing “Ev’ry Time We Say Goodbye” is a rousing finale.

The main thing is that Chekhov’s melancholy humor is perfectly matched with appropriate songs and so the overall effect is of a smart jukebox musical that honors both artists.  Music director Andy Evan Cohen is off to the side lovingly playing his accomplished arrangements of Porter’s tunes at the piano. The black clad Mr. Cohen also comically appears drunkenly staggering around the stage as a Chekhovian figure.

Director Janet Bentley’s inspired staging has the cast of 12 creatively entering from all over the theater and scenes are performed in different areas as well.  There are several arresting production numbers that are aided by choreographer Madeline Jaye’s simple yet expressive dances.  Ms. Bentley crucially has actors conveying the right tone of the plays and songs.

With a goatee, the youthful and nimble Sam Durant Hunter is a soulful and touching Treplov. The delightful Cynthia Shaw wonderfully captures the grandeur, egotism and pathos of Arkadina and Ranevskaya. Bearded, sunny and appealing Daniel Robert Burns is commanding as Trigorin, Gaev and Astrov. The bearded and stocky Bill Blechingberg is a roaring Lopakhin and Medvedenko. Félix Eduardo Gardón is a droll and wistful Firs and Dorn. Shea Madison is a lovely Nina, Olga and Yelena. 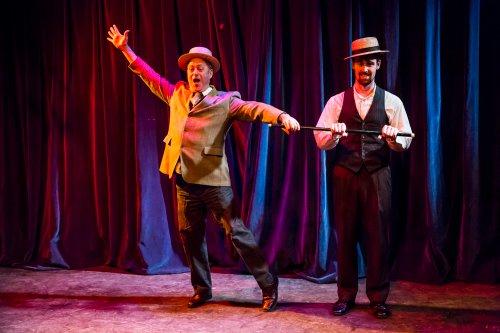 Justyna Kostek (Charlotta and a servant), Molly Revenson (Yasha/Serf/Sonya), Michelle Tsai (Irina/Anya), Ivette Dumeng (Masha and serf) and Aran Beiderson (Vanya) comprise the rest of the engaging company and they all have moments of glory.

A beautifully painted horizon on view, a shimmering red curtain for Treplov’s play, columns shrouded in cloth and a doorway and porch strewn with leaves are elements of Bentley’s striking scenic design. She provides a landscape that atmospherically conjures up the world of Chekhov.

The airy dimness of Richard Keyser’s lighting design gives the production a welcome vintage sheen. Costume designer Janet Mervin has everyone exquisitely clothed in an array of period looking garments.

Though structurally problematic, Mr. Chekhov and Mr. Porter has much to enjoy.