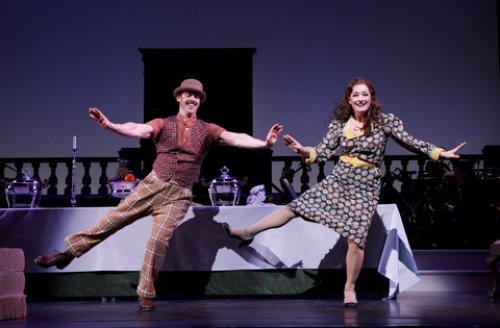 Christian Borle and Laura Michelle Kelly in a scene from New York City Center Encores!’ revival of “Me and My Girl” (Photo credit: Joan Marcus)

Fizziness abounds in this delightful New York City Center Encores!’ revival of the cheery 1937 British musical Me and My Girl. Instrumental to its success is Warren Carlyle’s euphorically inventive direction and choreography performed by a fabulous ensemble.

Leading man Christian Borle’s animated performance as the loveable Cockney upstart Bill Snibson who inherits an Earldom is the centerpiece of the zaniness. His face adorned by a drooping mustache, the rubbery and athletic Mr. Borle employs a marvelous accent, superbly tap dances and pleasantly sings the classic songs, “The Lambeth Walk” and “Leaning on a Lamp Post.”

Mr. Carlyle’s giddy opening is a thrilling mise-en-scène of a chorus line of servants, floating props and a grand back drop of a miniature representation of the country estate where the action is set. Act II starts with a rollicking cricket and tennis on the lawn segment showcasing cast members in gleaming casual wear and the commanding gyrations of Mark Evans who wonderfully plays a fatuous cad. There’s also a daffy number where portraits of ancestors in clothing of different eras come to life and dance. 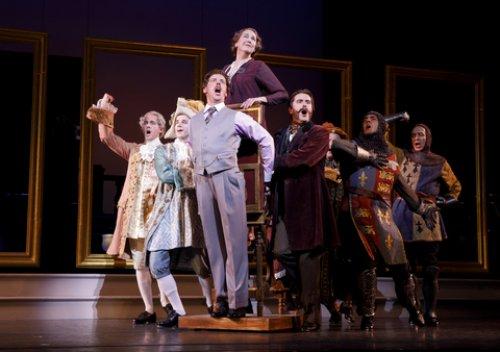 Christian Borle and Harriet Harris (above) and company in a scene from New York City Center Encores!’ revival of “Me and My Girl” (Photo credit: Joan Marcus)

After the death of the Earl of Hareford it is revealed that his heir is his estranged son from his early failed marriage. He is the gregarious lower-class Bill Snibson from London’s East End who scrapes by doing odd jobs. In order to succeed to the title and claim the fortune he must be approved by his aunt, the haughty Duchess of Dene who was the Earl’s sister. Complicating matters is Bill’s amiable girlfriend Sally Smith who is deemed unacceptable for Bill’s new station in life and must be left behind.  A Pygmalion/My Fair Lady series of transformations takes place while the 1930’s clash of the classes mirthfully plays out.

“Do you like Kipling?” “I’ve never Kippled.” “Would you like an aperitif?” Is taken as “Would you like a pair of teeth?” So, the response is “No thanks. I have my own!” These are a fraction of the verbal silliness wrought by L. Arthur Rose and Douglas Furber’s original book that was later revised by Stephen Fry with contributions by Mike Ockrent for the 1984 British revival and adapted for this production by John Weidman. 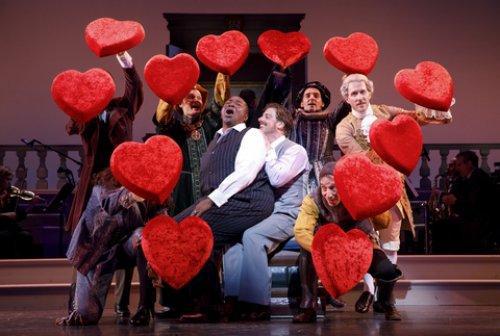 Chuck Cooper and Christian Borle (center) with the company of New York City Center Encores!’ revival of “Me and My Girl” (Photo credit: Joan Marcus)

Fussbudget Don Stephenson gets a lot of comic mileage out of “The Family Solicitor’s” intricate patter as the officious lawyer. Simon Jones and Suzzanne Douglas appear to great effect as Lord and Lady Battersby. Bill Buell’s very English butler is spot on. 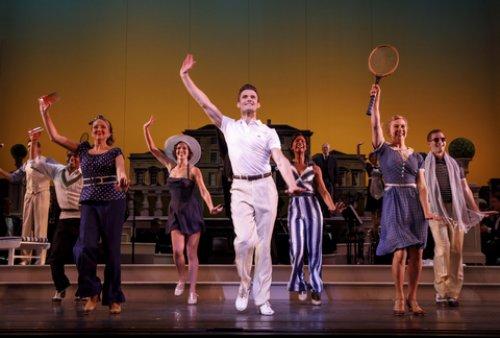 Mark Evans (center) and the company of New York City Center Encores!’ revival of “Me and My Girl” (Photo credit: Joan Marcus)

Warmly singing several ballads and radiating charm is Laura Michelle Kelly as the love interest Sally Smith. Ms. Kelly has tremendous chemistry with Borle and she is his equal in delivering a captivating musical comedy performance with depth of feeling.

British stage star Lupino Lane had previously played the character of Bill Snibson in the 1935 film Twenty to One.  Me and My Girl opened in 1937 and ran for 1,646 performances in London’s West End and was revived in 1941, 1945 and 1949. The 1985 London revival ran for 3,303 performances over eight years originally starring Robert Lindsay as Bill Snibson and Emma Thompson as Sally Smith. Mr. Lindsay won the Laurence Olivier Award for Best Actor in a Musical and also won the 1987 Tony Award for Best Actor in a Musical for the 1986 Broadway production that ran for 1,420 performances. Jim Dale replaced Lindsay and Tim Curry starred in the United States touring company.

This high caliber New York City Center Encores!’ production of Me and My Girl is a welcome opportunity to experience such historic fluffy entertainment.