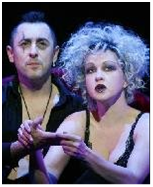 The conspiratorial travesty that director Scott Elliot and adapter Wallace Shawn have perpetrated upon the Brecht-Weill classic The Threepenny Opera invites no less than stunned silence. There appears to be such a concerted effort to disregard the heart and soul of this celebrated singspiel by these contemporary collaborators that you can safely assume that both Brecht and Weill are spinning in their respective graves, let along John Gay whose 18 th century The Beggar’s Opera served as their inspiration.

Shawn’s re-considered libretto, blatantly and irreverently coarsened for its shock (or is it schlock?) value, only serves to magnify the lack of trust in the original. Although there is a decidedly homoerotic edge to the raw language and the sleazy portrayals, you can forget gay. For its sheer perversity, this is a production that ranks among the most mischievously misguided in recent seasons. Certainly no one, except those already familiar with the social postures and the political polemics that are meant to ignite this musical, will know what the hell is going on.

There is something to be said for the venue – the old disco-den of iniquity Studio 54 – that obviously serves as the inspiration for the ludicrous posturing, hideous costuming, and vulgar displays of decadence that are the engine of this profane and punk-propelled fiasco. This is a display of the egregiously outré that makes Boy George’s Taboo seem like a walk through the Cloisters.

The best way to imagine what has happened to the beggars, the bourgeoisie, the pimps and whores, and the sordid denizens of the underworld in this operatic rant on the evils of capitalism is to think of a Cirque du Soleil troupe on Valium and under neon (what was lighting designer Jason Lyons thinking?). Worst of all, it is plodding and dull and an eyesore thanks to Isaac Mizrahi’s Halloween-on-Fire-Island costuming.

To be fair, the musical begins insinuatingly enough with the cast sauntering down the aisles to the vacant stage to the strains of Weill’s haunting overture. There, they primp in front of clothes racks, apply makeup and prepare to engage us as actors ought to do. And “wow,” you say, as the atypical pop singer Cyndi Lauper, who is making her Broadway debut, arrests us with “Song of the Extraordinary Crimes of Mac the Knife.” As prostitute Jenny, Lauper may sound like a Brooklyn babe and look like a fright in a white wooly wig, but she beguiles us once again in her tango duet with Macheath “The Ballad of the Pimp.” We have to wait too long for her to return for the plaintive and riveting “Solomon’s Song.” What comes as a surprise is how Lauper captures the disquieting and conflicted essence of her character while others in the company seem content to be merely distractions.

The biggest distraction is other-worldly Nellie McKay, who assumes the role of Macheath’s bride Polly Peachum without assuming that she has to sing any of the right notes. No one else is quite as committed to sustaining wrong notes or straying from the dramatic mark. She has the distinction of making the familiar and unforgettable ode “Pirate Jenny,” just plain regrettable. The ever nimble and delightful stage veteran Jim Dale cannily resorts to vaudeville shtick as the duplicitous Mr. Peachum, with the help of choreographer Aszure Barton. Ana Gasteyer is abrasive, loud and crass as his contemptible wife, and aggressively belts out “The Ballad of the Overwhelming Power of Sex.”

The character of Lucy Brown has been traded in for a transvestite model. What can you expect since her father Tiger Brown (Christopher Innvar) thinks nothing of wearing gold lame? Lucy’s portrayer is Brian Charles Rooney. He has a sterling soprano voice and gets high marks for “The Jealousy Duet,” and “Lucy’s Aria,” sung, not surprisingly, in direct-from-the-gutter German.

The musical rests on the pelvic thrusts of Alan Cummings, who, as the sinister Macheath, has been consigned to repeat many of those slimy and lascivious moves that more or less became his signature playing the emcee in Cabaret. Despite his S & M get-up and his East Village Mohawk, his smarmy body-language is self-defeating and generally undermines Macheath’s bitterly sardonic view of life as expressed in “The Ballad of the Happy Life,” and “Cry from the Grave.” We do get a sly look from Macheath as he asks for “Everyone’s Forgiveness.” By this time, we have reason to respond with an emphatic, No!