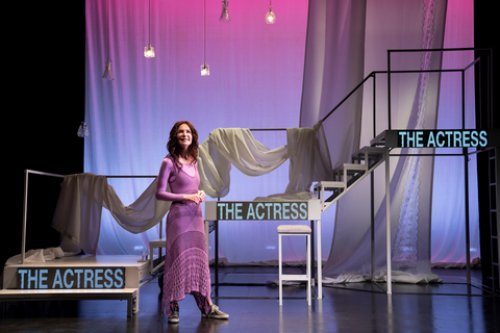 If you are put off by the idea of women defining themselves based on the men in their lives, then Lois Robbins’ one-woman play L.O.V.E.R. is not for you. However, if you concede that there are women today whose mothers brought them up to believe that they are nothing without a man, then you will find L.O.V.E.R. entertaining if not enlightening. Last seen Off Broadway in the revival of Cactus Flower, Robbins proves to be a very personable and genial narrator of this semi-autobiographical story of love, sex and finding contentment.

The play is divided into chapters that are announced on a zipper which crosses the stage starting with “The Little Girl,” continuing through such titles as “The Co-Ed,” “The Actress,” “The Patient,” and concluding with her “Rebirth” after a second more happy marriage, having several children and finding her true voice. Robbins’ “Woman” gives us the most startling revelation at the top of the play in which she states that she began having orgasms when she was three years old, discovering that the vibration of the washing machine gave her what she called “The Feeling.” Having had drummed into her head by her mother, that “Darling, you are nothing without a man,” she goes from one guy to another in order not to be alone. Her father, on the other hand, strips her of the ease she “found in her body and replaces it with shame and dis-ease.” When she gets away from her parents to an out-of-town college, her father threatens to pull her out if she dates a gentile. 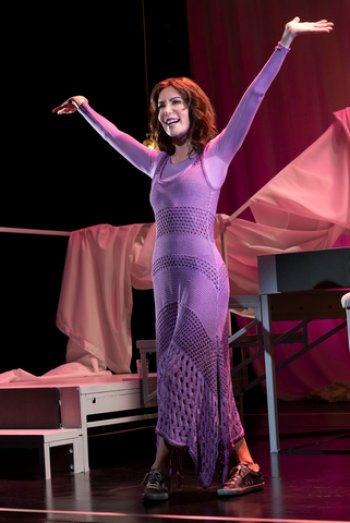 The list of her failed relationships grows with the telling that is quite amusing, with all the names “changed to protect the not so innocent”: Siler, an Iowa farm boy with long blond hair and blue eyes who can build things, but is gentile; Ronald, dark hair, blue eyes and a smile as wide as a palm leaf; Edward, sophisticated, polished and from Manhattan, who is growing addicted to drugs; Charlie One Ball, a doctor, son of her parents’ friend who proposes with the starting statement that “I expect your parents will keep me in the style to which I’ve been accustomed while dating you”; Peter, a Broadway star on the rise who turns out to be bisexual; Dexter, a film actor who lives in the apartment next door when she lives in Manhattan; and Barry, an aspiring actor from Hollywood royalty and a Catholic prince who turns out to be anti-Semitic. Some of these men get in the way of her acting career; others give her a boost by getting her introductions.

She marries for the wrong reasons and it doesn’t work out. She meets Arthur who is street smart, funny, charming and easy on the eyes and they eventually marry after dating for one year. While motherhood suits her as she vows to be the Perfect Parent, her story grows serious with a medical scare which puts a crimp in her acting career. Although she is a very permissive parent, she finds her children are just as much a handful as her own growing up was for her parents. When she reaches the stage where her friends are growing bored with their marriages and having affairs to spice things up, she realizes that she has grown up. When earlier in her life she believed that L.O.V.E.R. stood for “lust, orgasm, virility, erotic and rapture,” she has finally come to realize that it stands for “lasting, open, valued, emotional, and real.”

Lois Robbins in a scene from “L.O.V.E.R.” at the Pershing Square Signature (Photo credit: Joan Marcus)

Robbins has a breezy way with an anecdote and has tremendous stage presence. Her timing is impeccable. She is perfectly at ease telling stories based on her life that don’t always put her in the best light. While the show isn’t witty in the way of Nora Ephron, Wendy Wasserstein or Dorothy Parker, it is both engaging and droll. As directed by Karen Carpenter (Love, Loss an What I Wore), the staging makes use of every inch of Jo Winiarski’s set, a staircase draped in white cloth, on which lighting designer Jeanette Oi-Suk Yew plays various colored lights which beautifully change the setting and the mood. However, we also feel that Robbins is giving a performance rather than totally becoming the woman she is playing.

Written and performed by Lois Robbins (best known up till now for her long stints on three soap operas), L.O.V.E.R. is an old-fashioned confessional tale of a “liberated” woman who spends her life discovering that love and sex are not necessarily the same thing. Robbins is a captivating presence though there are no real revelations in her story.

Running time: one hour and 20 minutes without an intermission