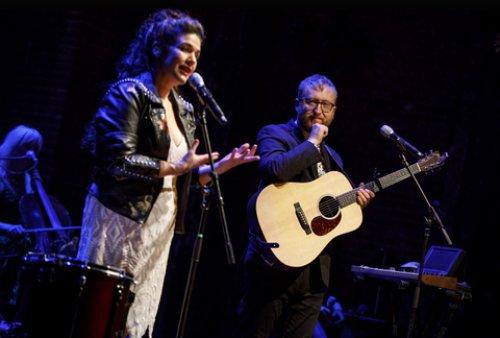 The personable and talented married singer-songwriter couple, Shaun and Abigail Bengson  explore their lives in this uneven concert musical.  Though initially charming, Hundred Days goes off course during its second half.

Wearing a black leather biker jacket over a slinky white dress, the long dark haired Ms. Bengson has an alluring presence, a powerful voice and plays drums.  The black-suited, bearded and bespectacled Mr. Bengson is jovial, sings with a twang and plays guitar.  They have tremendous chemistry together as they wittily banter, and separately they’re charismatic performers.

Written by The Bengsons and Sarah Gancher, the show presents a stylized take on the couple’s love at first sight meeting, the complications it caused with their partners at the time, their instant romance and quick marriage.  It’s a New York story as they lived in Astoria, there’s mention of a memorable walk from Canal Street to The Cloisters, and a trip to Coney Island is pivotal. 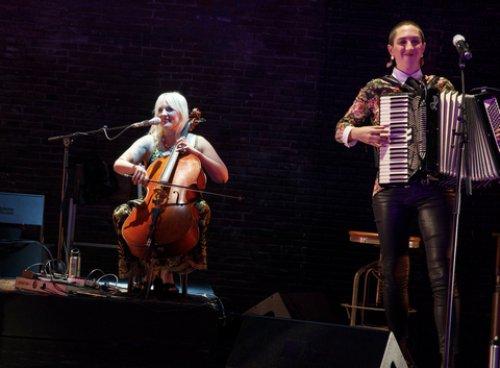 The material is often informally directed at the audience with mentions of the day and time of the performance.  It’s an appealing conceit until the narrative gets dark and trails off into vagueness.

“Hundred Days,” the title song, is a reflective reaction to a medical crisis one of them is struck with that’s not concretely explored.  Ms. Bengson often refers to a trauma she endured at 15, but that isn’t really explained.  These and other murky details mar what had been an enjoyable setup.  Even though Hundred Days only lasts 75 minutes, it drags to its conclusion due to a lack of clarity.  A chat between the couple as they’re sitting at microphones about their imagined future lives goes on and on to little effect.

The Bengsons’ eclectic score ranges from the styles of country and western, folk, pop and rock.  Some songs are more effective then others but overall it’s an enjoyable program.  The musical and dialogue sequences are crisply rendered by Nicholas Pope’s well-modulated sound design. 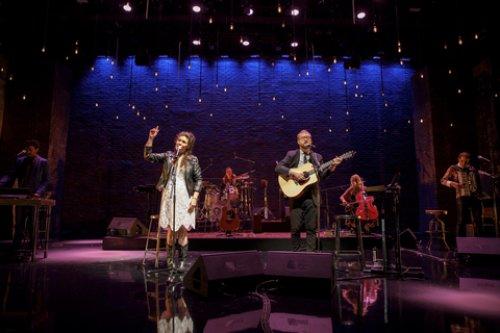 Joining The Bengsons onstage is an accomplished company of musicians and performers.  The blonde and striking Colette Alexander is on cello, Jo Lampert plays accordion, guitar and performs several incidental roles, Dani Markham is on percussion, and Reggie D. White is on keyboard and sunnily interacts with The Bengsons.

Hundred Days does have its virtues but is ultimately unsatisfying.