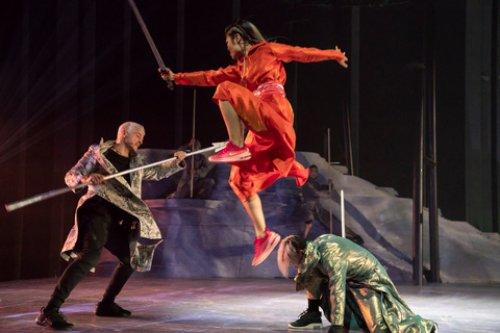 David Torok, Jasmine Chiu and Ji Tuo in a scene from “Dragon Spring Phoenix Rising” at The Shed (Photo credit: Stephanie Berger, courtesy of The Shed)

Sometimes you don’t need a long, complex story — or even an engaging one — to hook an audience. At the showing of Dragon Spring Phoenix Rise at The Shed that I attended, audiences clapped and hooted for heroes and villains alike, despite being given no logical reason to do so. The heroes and villains possessed no distinguishing character traits, other than differing accents, and they voiced no discernible reasons to be fighting. The fighting was just that awesome.

The visual bombast and fight choreography of Dragon Spring, a world premiere Shed commission, are thrilling enough to recommend the show as an expensive diversion, at the very least. There are moments when the show’s production elements come together so spectacularly that they almost lift the rest of the show with them. Almost. 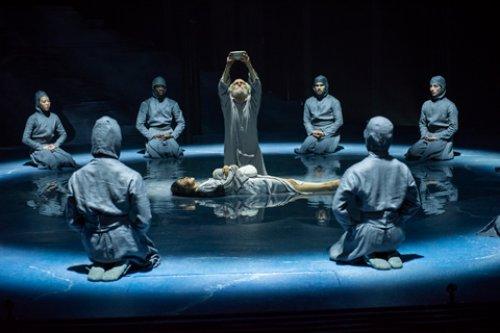 David Patrick Kelly and PeiJu Chien-Pott and members of the chorus (guardians of the House of Dragon) in a scene from “Dragon Spring Phoenix Rising” at The Shed (Photo credit: Stephanie Berger, courtesy of The Shed)

I will mention that Dragon Spring is not so much a “kung fu musical” as it is a kung fu showcase with three new Sia songs mixed in. The martial arts-trained actors have worked hard on learning how to sing, and it shows, but this show could have done without the “musical” aspect. The show’s use of already-existing Sia songs, when mixed with its visual splendor and kinetic staging, are all that it needs to soar. Sia’s new songs written for this show, while beautiful, just bring everything to a halt.

In fact, the pacing of the entire show is off-balance. Act I kicks off with a far-too-cryptic exposition followed by a far-too-long chaotic dance sequence that features bloated, unintelligible choreography. (The choreography of Act II’s dance sequence is far superior.) Sia’s new songs do nothing to further the story, and thus serve as filler until the next kung fu sequence rolls along. It’s as if she composed them in a vacuum. 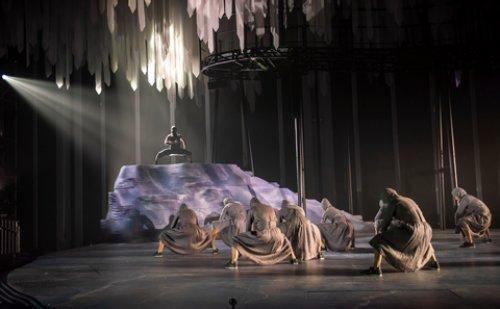 Dickson Mbi with members of the chorus (guardians of the House of Dragon) in a scene from “Dragon Spring Phoenix Rising” at The Shed (Photo credit: Stephanie Berger, courtesy of The Shed)

It’s more likely, though, that she just composed her pieces separately from Jonathan Aibel and Glenn Berger, who penned the script. Known for the engaging, amusing, heartfelt screenplay for Kung Fu Panda, Aibel and Berger have apparently been hard-pressed to write anything more than a skeleton of a story here. In Dragon Spring, characters undergo serious, life-changing transformations without possessing clear-cut motivations to do so. While I was impressed that Dragon’s actors — led by acclaimed Chinese director Chen Shi-Zheng — were able to deliver continuous fight choreography for most of the show’s one hour and 50 minute runtime, I was just as disappointed that they never really got to act.

That being said, Jasmine Chiu and PeiJu Chien-Pott have imbued their characters with the necessary verve and gravitas, respectively, and David Patrick Kelly brings a compelling joviality to the proceedings. 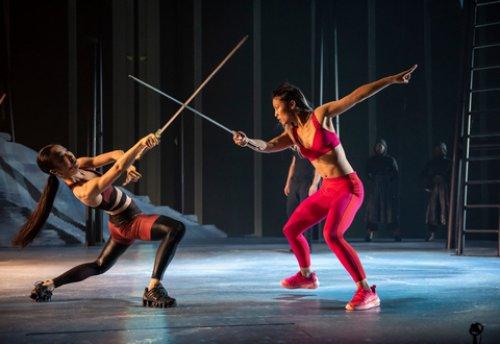 PeiJu Chien-Pott and Jasmine Chiu in a scene from “Dragon Spring Phoenix Rising” at The Shed (Photo credit: Stephanie Berger, courtesy of The Shed)

And despite its flaws, there are still moments in Dragon that may take your breath away. This is surely thanks to Shi-Zheng’s collaborations with set designer Mikiko Suzuki MacAdams and lighting designer Tobias G. Rylander, who fill every inch of The Shed’s cavernous theater space with hallucinogenic displays and aerial spectacle. And the contributions of movement choreographer Akram Khan and martial arts choreographer  Zhang Jun cannot be ignored.

But next time, can The Shed wait until it has a compelling story before it throws a great deal of money at it?

The McCourt Theater, The Shed, 545 West 30th Street, in Manhattan

Evan has written for Mic, Ranker, and Out Magazine, to name a few, and has interviewed everyone from Joan Rivers to the cast of Jersey Shore. He's originally from Virginia, which is a good place to leave, and now resides in NYC, where he studies improv at The PIT and produces the recurring show "The Improvised Real Housewives Episode." He once wrote an op-ed from the perspective of the peach in Call Me By Your Name. Evan likes playing piano, Cloud Atlas (the book AND movie, don't judge), and reading difficult novels on public transportation in hopes that he'll be featured on Hot Dudes Reading. He has also written a one-act musical with another person named Evan about the ghost of Saddam Hussein having an affair with Nicolas Cage. You missed it.
Contact: WebsiteTwitter