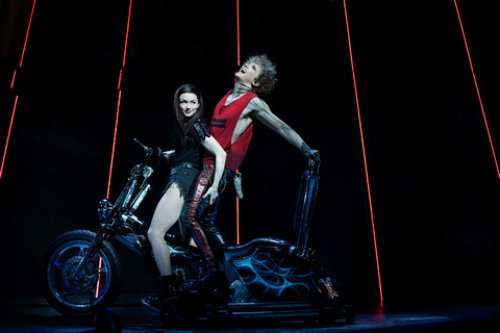 “Paradise by the Dashboard Light” exuberantly conceived as the memory of a middle-aged married couple’s first time having sex provides a few enjoyable minutes in the execrable Bat Out of Hell – The Musical. By the time the show finally ends after two hours and forty minutes including an intermission and an extended curtain call, that first act number’s charms have long since been obliterated. “I’d Do Anything for Love (But I Won’t Do That)” is the painfully drawn out finale with virtually every character repetitively participating.

The score is derived from the catalog of songwriter Jim Steinman’s Bat Out of Hell album trilogy whose songs were immortalized by Meat Loaf. Mr. Steinman’s  accomplishments as a composer and lyricist are monumental. As a librettist he is dreadful. His negligible scenario borrows heavily from Peter Pan (a doomed character is actually named Tink), the hoary stilted dialogue is reminiscent of Flash Gordon cliffhangers and it’s all often ill-matched with his iconic songs. Much of it is supposed to be funny.  It all makes Bat Out of Hell-The Musical a numbing dysfunctional slog. Very often, on-stage actions are projected on to a very large screen opposite them with characters followed around by videographers dressed in black. We get to watch schlock twice simultaneously.

The stage is set with a motorcycle and a grimy mattress on rocks surrounded by tires on one side of the stage, signifying that we’re in for a dystopian time in a future decimated Manhattan here renamed Obsidian. The other side depicts a modernistic skyscraper called Falco Towers which soars into the rafters and is outlined in neon lights. Instead of opening with a song, the youthful marauders in tattered leather and jeans known as “The Lost” like Peter Pan’s “Lost Boys” pompously speechify. They’re “freezers.” A series of chemical catastrophes and earthquakes has left a sizable population frozen at the age of 18. Their moppet-headed leader is called Strat. Living high atop the luxurious Falco Tower is police chief and ruler, the nefarious Falco, his embittered wife Sloane and their rebellious teenaged daughter Raven. Raven escapes from her parents’ eagle eyes and wanders through the surrounding wasteland, meeting and falling in love with Strat. Their romance wanly and tediously plays out with melodramatic complications. 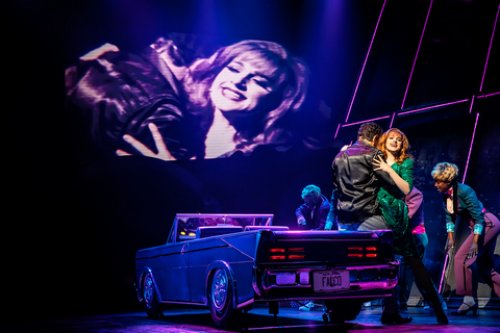 Having portrayed Strat in various incarnations of the show, Andrew Polec has breeziness, stamina and a young Roger Daltrey Tommy-style flair. Hedwig and the Angry Inch Tony Award Winner Lena Hall does wonders as the campy and sensual Sloane. Flamboyantly odious is the dynamic Bradley Dean as Falco who channels Caption Hook as played by Elvis Presley. Recreating her original London role or Raven is the winsome Christina Bennington. Avionce Hoyles, Danielle Steers, and Tyrick Wiltez Jones all offer strong support.

The entire cast gamely performs Xena Gusthart’s choreography adapted by Emma Porter’s original which is on the simplistic level of aerobics. Faced with such lame material, director Jay Scheib admirably melds all of the elements into a solid presentation. Mr. Scheib’s physical staging is adept, containing some theatrical flourishes. 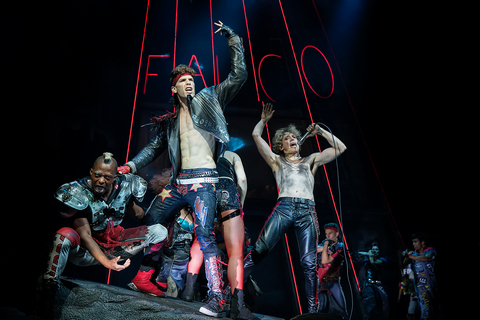 In this age of jukebox musicals, Steinman’s glorious body of work is certainly a viable possibility, but this isn’t it. Bat Out of Hell-The Musical is comparable to the equally atrocious futuristic London Queen debacle, We Will Rock You that never made it to New York. This production began in Manchester, England in 2017 and then had a brief run in London’s West End. Then it was on to stops in Toronto, Germany, and a troubled United States tour before limping to this summer engagement at New York City Center.

Bat Out of Hell-The Musical IS hellish.