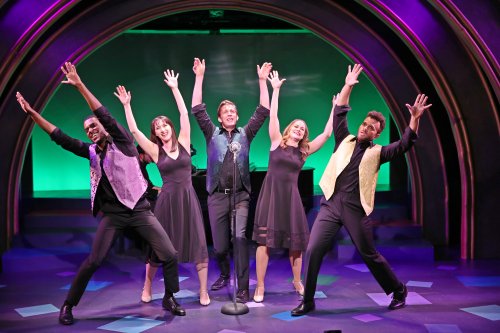 Jovan E’Sean, Alex Getlin, Benjamin Eakeley, Mamie Parris and Justin Keyes in a scene from “Anything Can Happen in the Theater: The Musical World of Maury Yeston” at The York Theatre (Photo credit: Carol Rosegg)

The York Theatre Company’s new revue, Anything Can Happen in the Theater: The Musical World of Maury Yeston, reminds us not to take for granted the talents of this vibrant composer/lyricist, best known for such Broadway titles as Nine (1982), Grand Hotel (1989) and Titanic (1997). This one-act show, featuring five abundantly gifted singer-dancers, underscores the wide-ranging nature of the composer’s music. Yeston has successfully adopted diverse musical sounds, from 1920’s pop to mid-twentieth-century rock to folky-country contemporary. Mostly though, he’s known for lush, sweeping, timeless melodies that seem at times to bypass listeners’ ears and aim straight for the heart. His lyrics are smart, but not overly clever.

The program unfolds without narration, and you may find yourself peeking into your playbill to see which show a particular number came from. The show was conceived and directed by Gerard Alessandrini of Forbidden Broadway fame. He—perhaps with some input from musical director Greg Jarrett—was apparently responsible for determining the inclusion and order of songs, some of which are from relatively obscure projects. Nine, unsurprisingly, is well represented, as is Grand Hotel. Only one song from Titanic is included, however—more about which later. The show’s title number was written by Yeston expressly for this production. 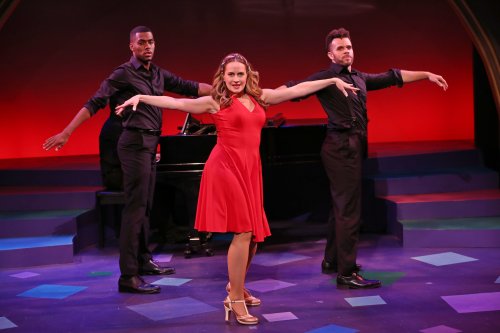 Jovan E’Sean, Mamie Parris and Justin Keyes in a scene from “Anything Can Happen in the Theater: The Musical World of Maury Yeston” at The York Theatre (Photo credit: Carol Rosegg)

Some songs highlight Allessandrini’s patented comic flair—for instance, a sexy and at one point outright graphic “Salt n’ Pepper,” featuring Justin Keyes. It’s one of those numbers that equates libidinousness with culinary extravagance (or—bluntly stated—lust with gluttony). Some of the solo numbers are, naturally, rather less flashy. For a revue, however, the show has significant dance content, and some of Gerry McIntyre’s choreography is downright athletic, most notably in what is arguably the show’s 11 o’clock number, “Feet” (from In the Beginning), a stunningly effective and invigorating song about the Biblical flight of the Jews from Egypt.

It’s the singing, though, that gives Anything Can Happen its allure. All five singers (two women, three men) have at least a number or two on which to soar. There’s not a clunker among the twenty or so musical numbers listed in the program. 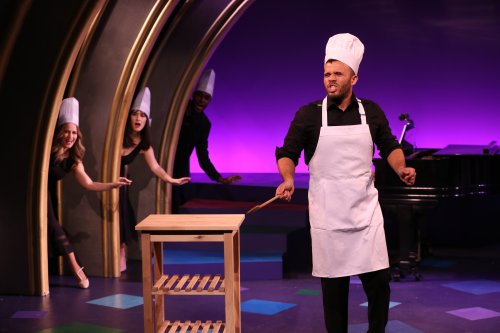 Mamie Parris, Alex Getlin, Jovan E’Sean and Justin Keyes in a scene from “Anything Can Happen in the Theater: The Musical World of Maury Yeston” at The York Theatre (Photo credit: Carol Rosegg)

Early on, Mamie Parris gives us some flapper-ish fun with a mashup of “Shimmy Like They Do in Paree” (Death Takes a Holiday) and “I Want to Go to Hollywood” (Grand Hotel). Toward the end of the show, she shows off her dramatic chops on Nine’s “A Man Like You”/“Unusual Way.” By contrast, Alex Getlin’s singing has less of a classic Broadway sound. It sometimes takes on the crystalline quality of certain folk singers: Joan Baez, perhaps. Her performance of “Strange” is especially appealing.

As for the men, Jovan E’Sean is delightful on the piquant “Mississippi Moon,” a song that could have been penned by Hoagy Carmichael. The charismatic Keyes makes an impression on a number of songs besides “Salt n’ Pepper,” and your eyes may drift to him on the group numbers, especially “Feet,” in which he takes the lead. Matinee idol-ish Benjamin Eakeley has perhaps the most to do of anyone in the cast. He is fine on the tender, I-dare-you-not-to-tear-up cabaret staple “New Words” (In the Beginning), and he shows good comedic instincts as a peripatetic lothario on “Only with You” (Nine). However, he lacks the quality of genuine frustration needed for “Guido’s Song” from Nine, a number that might better have been delegated to the flamboyant Keyes. 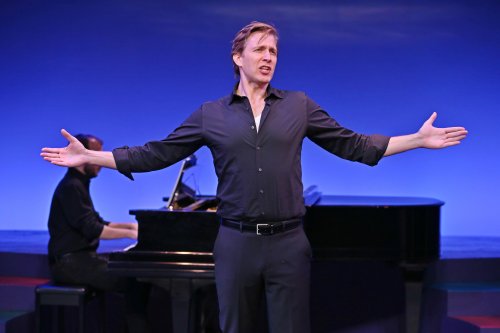 Benjamin Eakeley with Greg Jarrett at the piano in a scene from “Anything Can Happen in the Theater: The Musical World of Maury Yeston” at The York Theatre (Photo credit: Carol Rosegg)

Jarrett’s work at the piano is exceptional, from the brief overture to the show’s final chords. One doesn’t miss strings or horns or percussion, although the show might be even better if some or all such musical elements were added.

The production is presented on York Artistic Director James Morgan’s two-level set framed by a rainbow-like archway, with the grand piano dead center. Lighting designer Jacob Zedek tints the scrim with various shades, depending on the theme or mood(s) of each song. The costumes by Melinda Hare are mostly black or charcoal gray, but there are occasional bursts of color, such as the bright lavender of the silky nightwear worn by Parris during Nine’s “Call from the Vatican.” 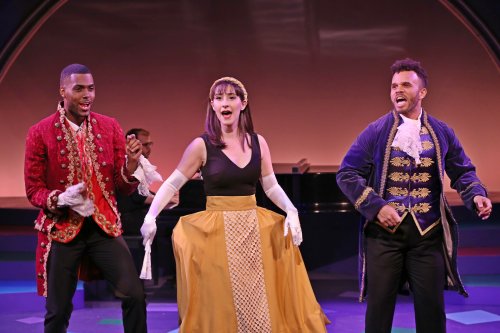 Jovan E’Sean, Alex Getlin and Justin Keyes in a scene from “Anything Can Happen in the Theater: The Musical World of Maury Yeston” at The York Theatre (Photo credit: Carol Rosegg)

The harmonies on the group numbers are thrilling, particularly in the show’s penultimate song, “Home” from Phantom. Why, then, Allessandrini chose to end the program with “Godspeed, Titanic” is puzzling. We all know how that gallant ship’s maiden voyage wound up. Surely, “Home” would have provided a better final sentiment.

Anything Can Happen in the Theater (through December 29, 2019)