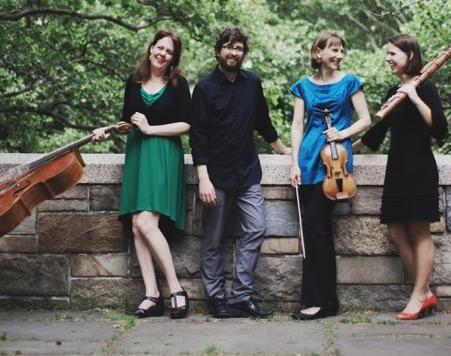 Playing for a small but appropriately appreciative audience, Repast Baroque Ensemble, a chamber group founded in 2003 in New York City, specializes in Baroque music; the group typically organizes concerts and particular themes – Latin American Baroque, Francois Couperin and Friends, Handel and the Voice, and their latest endeavor, Goldberg Variations – and their most recent offering was no different. Their early May concert featured nine works by four Bohemian composers (with a Purcell fantasy just for Baroque fantasy fun).

Playing in various combinations and with two solo performances, the five musicians – Amelia Roosevelt/violin, Hélène Plouffe/violin, Jessica Troy/viola, Katie Rietman/cello and Gabe Shuford/harpsichord – offered in every piece elegantly warm musicianship together with a lively balance of intellectual clarity and graceful expressivity. These musicians are closely attuned to the particular historical and artistic nuances of the music they play, to each other and to their audience; their performance is fresh and formal, intimate and stately in equal measure.

The program opened and closed with pieces for all five musicians together. Heinrich Ignaz Franz Biber (1644-1704) and Johann Heinrich Schmelzer (1620/23-1680) both made the quartet of stringed instruments and the harpsichord into a coherent unit, even as the harpsichord is so much less loud. It is as though the harpsichord provides a ground on which the string instruments provide alternately close and extended stitched lines.

The harpsichord did have its own individual moment: Shuford presented Buxtehude’s Toccato in G major marvelously. Because the instrument has no volume and there is consequently little shift between quiet and loud, the dynamics and drama of both the music itself and the performance lie in virtuosity of delicacy. Shuford consistently converted the music’s density of notes from a rapid sequence of tinklings into a flowing, liquid sound. It was lovely.

Though all the composers on the program offered their particular pleasures – Schmelzer’s sorrow in his Lamento sopra la morte Ferdinand III and his capacity of fun, turning violins quite convincingly into bagpipes in Polnische Sackpfeifen; Finger’s ornate liveliness; Purcell’s dignified Fantasia – it was Biber who was the star of the show: unique and distinct, he was simultaneously a quintessence of the Baroque. Prolific in both sacred and secular music, Biber married past traditions with spontaneity and merged pastoral and courtly impulses into something genuinely new. The dances of the Balletti Lamentabili recall music’s original organic connectedness to dance – and offered a particularly clear demonstration of these Repast Baroque players’ evident pleasure in making music together – and ended with a deeply felt and graceful, spacious lament.

Amelia Roosevelt’s presentation of Biber’s most well known piece, the Passacaglia in G minor for solo violin, was superb. In Roosevelt’s hands, Biber’s Baroque writing felt entirely modern; the composer and the violinist were equally in the height of their skills and insights. Biber’s lyricism joined cerebral complexity and sensuous pleasures into a single essence. This was an expansively gorgeous and generous performance.

Two overarching pleasures unified the evening. First, Bohemian Baroque music is distinctive: folk and formal elements interconnect, earthiness and formality merge. All these features were highlighted in this program. Second, these musicians, specializing in this music, have made their specialty not arcane or precious, but vivacious and fresh.