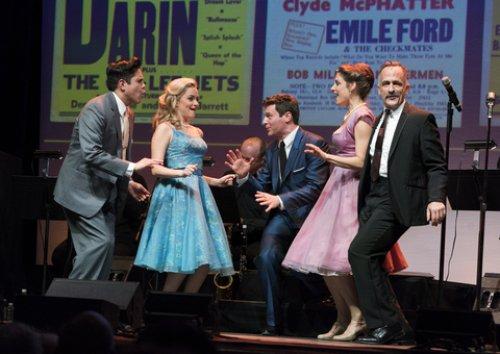 “Beyond the Sea”‘s pulsing opening notes were played by the band in near darkness.  Then through dimness, wearing a shiny blue suit, Jonathan Groff appeared and majestically sang the lyrics, and The Bobby Darin Story was off to an electrifying start.

This biographical-themed concert was presented as an edition of the 92Y’s Lyrics & Lyricists Series. It had the polish of a major production due to director Alex Timbers’ masterful presentation, Chase Brock’s dynamic musical staging and the star power of Mr. Groff.

Whether bantering with the audience, displaying energetic dance moves, reciting factual details or performing Bobby Darin’s signature songs, the boyish Groff was sensational. “Splish Splash,” “Mack The Knife” and “If I Were a Carpenter” were all given galvanizing renditions. There was his soaring treatment of the emotional “Once in a Lifetime” near the end of the show.

David Pittu, George Salazar, Elena Shaddow and Stephanie Styles made up the highly talented company of vocalists who wonderfully appeared throughout. Each had their own moments to shine musically as well as imparting information about Darin.

Mr. Pittu did a hilarious impersonation of George Burns as he and Groff recreated a portion of the duo’s Las Vegas club act from the 1950’s and they did a duet of “I Ain’t Got Nobody.” 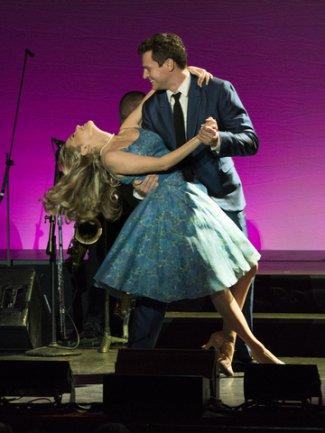 Ms. Styles was a gorgeous Sandra Dee and performed a stirring take on “Artificial Flowers” by Sheldon Harnick and Jerome Bock. Mr. Salazar performed a terrific “Hound Dog” with Elvis Presley mannerisms. Ms. Shaddow beautifully portrayed integral characters and did a lovely duet of “I Can’t Give You Anything but Love” with Groff.

The finale had the company performing a rousing version of Darin’s “As Long as I Am Singing.” Other Darin compositions included “If a Man Answers,” “Dream Lover,” Multiplication,” “18 Yellow Roses,” “Things,” “Rainin’ ” and “I Am.”

“Danke Schoen” was intended for Darin but in the 1960’s he busy with his music company and he passed it on to Wayne Newton, and that was another Groff gem here.

Music directors Andy Einhorn and Andrew Resnick led the accomplished band as they breezily ran through one iconic number to the next. Brian Pareschi was on trumpet, Todd Groves was on woodwinds, Jim Hershman was on guitar, Michael Thurber was on bass and Jared Schonig was on drums.

Producer of 92Y’s Lyrics & Lyricists, Ted Chapin assembled and coordinated the accomplished creative team. The results were this inspired retelling of the pop figure’s life through song and biographical commentary that was skillfully woven into the presentation.

During the show, there were humorous references made about that Bobby Darin (1936-1973) was born several blocks away from the 92nd Street Y in East Harlem. He suffered from rheumatic fever as a child which damaged his heart and left him in precarious health. He graduated from the Bronx High School of Science, dropped out of Hunter College and at 19, began a music career as a singer and songwriter.

In the next few years his career was meteoric, achieving popularity and winning Grammy Awards. In the 1960’s, he acted in movies and was nominated for an Oscar and had a storybook romance and marriage to teen starlet Sandra Dee. He became politicized after the assassination of Robert Kennedy and then reinvented himself as a folk singer.

There was also the personal matter of the woman he grew up believing was his sister but who was actually his mother. She was unmarried when she became pregnant. He was raised believing his grandmother was his mother. This was revealed to him in 1968 and is believed to have contributed to his fluctuating mental and physical health. By the time of his death at the age of 37 after a heart operation, he had returned to mainstream show business.

The 92Y’s Lyrics & Lyricists Series: The Bobby Darin Story was an informative and thrilling depiction of this fascinating show business figure.