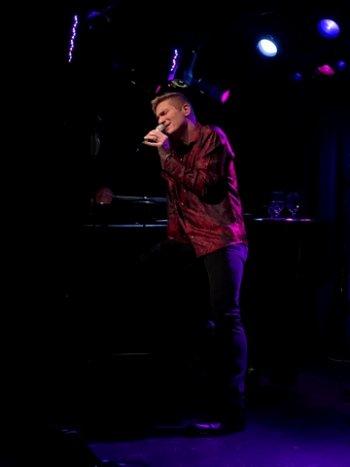 Pink’s “Perfect” was the exhilarating finale of singer Christopher Caswell’s vivacious cabaret act, Step into the Sun. Fourteen eclectic, mostly unconventional numbers were performed in 75 easygoing minutes with depth, humor and virtuosity. Interspersed with the musical portions was his expertly crafted biographical patter delivered with skillful comic timing and emotional resonance.  It all added up to an entertaining theatrical self-portrait.

“I saw Into the Woods four times. I may have missed a witch,” declared the mature yet boyish Mr. Caswell about arriving in 1980’s New York City to pursue a career in the performing arts. This led to appearances singing at notable nightclubs of the era, Off-Broadway roles, and being a member of the oldies singing group Uptown Express.  A Texas native, he grew up as one of six children in humble circumstances. “Material of the Gods” is how he described his mother’s affection for polyester in which he and his siblings were often clad.

There were fond reminiscences of going to the local dinner theater to see stars the likes of Bob Crane and Bob Denver.  After naming his five favorite movies the audience was asked for theirs, leading to a delightful communal exchange due to his sunny personality. Along the way of this tuneful odyssey we learn that he is gay, recently married his long term partner, and has a daughter.

Blond, athletic and physically expressive, Caswell possesses a seasoned tenor voice that beautifully conveys the intention of each song with his often soaring personal stamp. Dressed in black jeans and an untucked red shirt with black splashes, he visually evokes the New Wave era of his youth.

A ravishing “The Nearness of You” by Hoagy Carmichael and Ned Washington was the sole nod to The Great American Songbook during this concert drawn from contemporary pop, rock and show tunes.  “Waving Through a Window” from Dear Evan Hansen was triumphantly performed as were Ferron’s “Testimony” and Rachel Platten’s “Fight Song.”

This was Step into the Sun’s final encore performance following presentations at various venues in the past year. It was a welcome opportunity to experience Christopher Caswell’s engaging talents during an affirmative and thoughtful program.