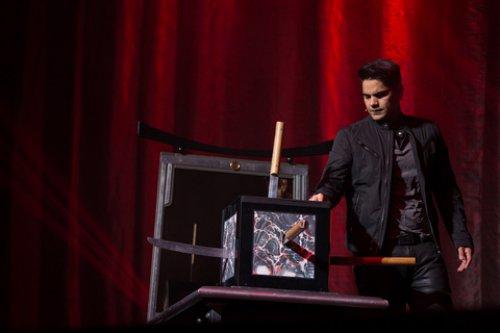 Card and coin tricks, levitations and swords are among the classic illusions that are flawlessly on display.  An adorable Yorkshire terrier named Gizmo wearing a red holiday sweater disappears and reappears in different areas of the stage. A red balloon is instrumental in an amazing exercise  There’s a spectacular sequence involving snow.  An elaborate set-up has one million dollars vanish.

The youthful Mr. Bishop is highly personable and delivers wry patter chock full of one-liners throughout.  Bishop is an acclaimed magician who tours all over the world and has returned to The New Victory Theater after an engagement there last year.

He grew up in rural Pennsylvania, was raised by foster families, and learned about magic by reading books at the public library. These biographical details add depth to his shaded yet sunny persona and inform his terrific rapport with children.  At the start of the show’s second act, there’s a commotion in the mezzanine with the sound of excited kids because he’s upstairs chatting with audience members before beginning his latest demonstration. 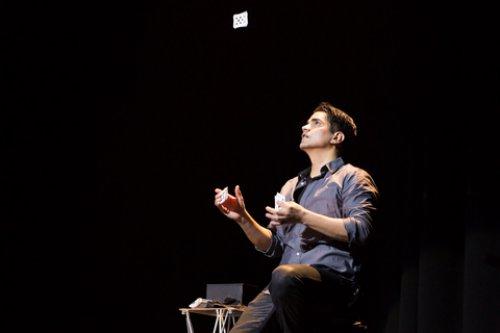 In the requisite role of a magician’s beautiful assistant, the alluring, longhaired and leggy Kim Hess is perfection.  Virtually silent except for some minimal banter, the graceful Ms. Hess majestically moves props and aids in many of the illusions. Hess crams into a small box and seemingly gets pierced by swords, then mysteriously re-emerges unscathed.  Stupendously twirling glowing batons while doing a sensational dance routine is a highpoint of Hess’ participation.

Several times children from the audience are invited to participate in the exhibitions and at one point a family of three is brought onstage for a complex card trick.

Many of the feats are projected onto a large screen onstage.  This adds to the excitement as one can see up close the stunning sleight of hand bits such as half-dollar coins mysteriously multiplying.

An astonishing portion has the audience playing a game with a program insert that has depictions of holiday icons that include a gingerbread man, a dreidel and a wreath.

The opening is a razzle dazzle of smoke, strobe lights, and striking imagery of clouds and stars projected onto jagged panels. Tricks are punctuated by moody covers of pop songs such as A-ha’s “Take on Me.” 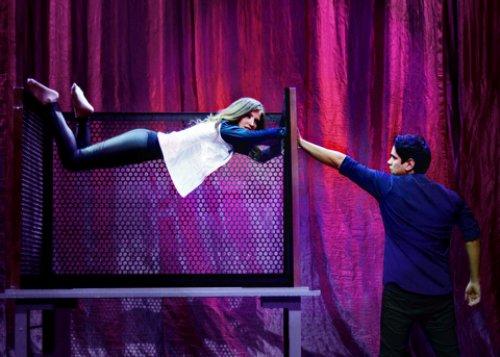 Contemporary trappings aside, one of Believe In Magic’s great highlights was quite simple. A projection of Bishop wiggling his fingers in various configurations brought tremendous bursts of laughter from small children.  Their glee was contagious.

Though billed as family entertainment, the enchanting Believe In Magic will arouse the sense of wonder in anyone.

Besides the actual show, also of note at The New Victory is the completed renovation of  “Jack and Lew’s Lobby.”  Named in honor of the real estate developer brothers Jack and Lew Rudin, this space has areas for families to interact and play games.  Nearby is “LuEsther’s Lobby” that commemorates philanthropist LuEsther T. Mertz.  It has a modernized merchandise stand and a small café. This is all a bright and wholesome environment to spend time before shows and during intermissions.