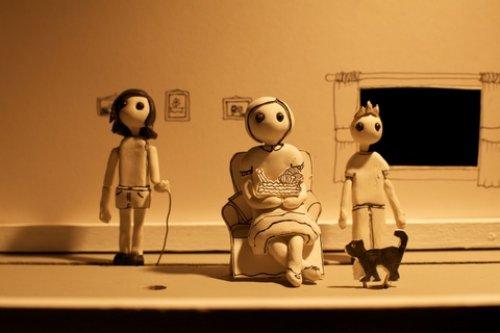 On reading in a press release that Feral is a “multimedia” production incorporating puppetry and “immersive soundscapes,” you would have only a vague idea of the ingenuity and inventiveness of this likable little play—a Scottish production presented as part of the Brits Off Broadway series at 59E59 Theaters.

For one thing, if you’re counting on marionettes or sock puppets, you’ll be out of luck. The black-and-white figures in this show are wee ones, a couple of inches or so high. With heads made of clay and bodies constructed from mat board, they’re like tiny rod puppets, with black-bead eyes and no nose or mouth. The “rod” that operates them is a stiff, heavy wire. Some of these figures can travel along a groove on a desk-top mini-stage, while others apparently have more limited movement (turning of the head, for instance, or waving of an arm).

All of this is brought to life via digital camera, which captures the movement of the figures on a quickly assembled “set” that is, in effect, a whole miniature seaside town, with businesses and homes through which the various human, animal and automotive figures navigate. At one very “meta” point, we even see a Punch and Judy show at a town festival: puppets putting on a puppet show! 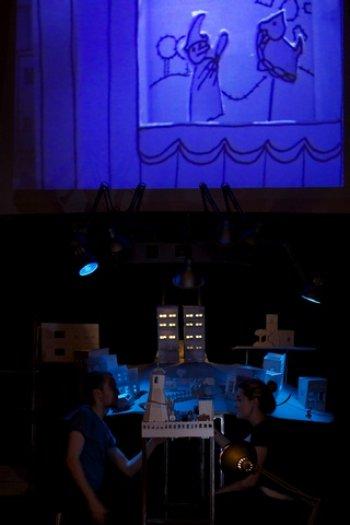 The camera-captured content is projected, live, on a large screen above the stage. It’s impressive to see how much can be done to create a whole world in this way, especially when lighting effects are brought into the dollhouse-like set and when sound effects—sirens wailing, waves crashing, gulls squawking—are added. There is recorded human speech, sometimes heard clearly and sometimes manipulated so that we hear voices but can’t discern actual words. There is, however, no conventional acting by the human “cast” (Alex Bird, Jim Harbourne, Arran Howie, Matthew Leonard and director Ross MacKay). They’re there to put all the moving parts together.

At points the focus moves away from the miniature figures, as the camera captures the hand of a cast member who draws and/or writes on sheets of paper. We also see pages from a character’s scrapbook. At one point, the show employs an old technique you’ll remember from childhood—quickly flipped pages with images, creating the impression of animation.

The show lasts considerably less than an hour, but it is a very full program that satisfies as though it were a whole evening of theater. The story of Feral concerns a boy named Joe who, along with his sister, becomes intrigued by the opening of something called “Supercade,” which he believes might be a place where superheroes live. It turns out, however, to be a seedy, disreputable arcade attraction that quickly turns the town into a squalid nightmare. Before long, businesses shutter and lawlessness prevails. Characters loot, fornicate in public, and worse. Graffiti is everywhere. A phallus is painted on the doors of a local church, leaving the pastor to hold a sign proclaiming that the end is nigh. You may be taken aback by how grim the whimsy becomes. 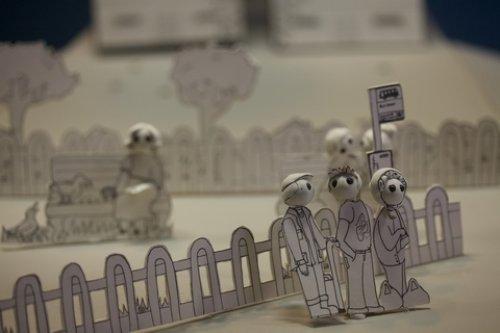 Part of the enjoyment of Feral is following the story as it’s seen on the screen while simultaneously checking out the cast members below as they set things up and create the effects. Despite the fact that the puppet figures are merely a step or two more lifelike than a child’s stick-person drawings, there is an eerily real ambience about the whole thing. At times it feels as though you’re watching a documentary film about urban decay.

The technical wizards behind the whole enterprise are scenic designer Amelia Bird, lighting designer Simon Wilkinson, music/sound designer Jim Harbourne and technical director Andrew Gannon. It seems almost inappropriate to enumerate their titles separately, however, as all of the various production elements operate together as part of a smooth team effort. (After the performance under review, audiences were invited to the stage to see the detail of the Lilliputian set up close.)

Some of the stagecraft strategies seen in Feral have enhanced more-conventional theatrical productions in recent years. What’s startling here is seeing how well everything converges to tell the story with the flesh-and-blood humans staying squarely in the background rather than in the spotlight.

Tortoise in a Nutshell and Cumbernauld Theatre

Running time: 50 minutes without an intermission.