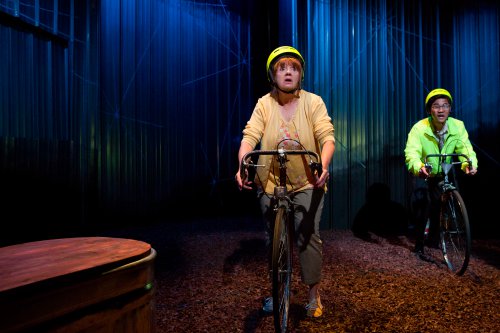 Alexandra Collier’s newest production, and making its New York premiere, is the thrilling UNDERLAND. This tale, under Mia Rovegno’s direction, illustrates the conflict between hoping and dreaming of a better future while fighting to escape your current reality. Equal parts terror and heartwarming moments, UNDERLAND provides a unique experience that will shock even the most avid of theatergoers.

Headlining a talented and captivating cast is Annie Golden. No stranger to Broadway (most recently seen in Violet) and TV (Orange is the New Black), Golden doesn’t fail to impress as she portrays the lovable and quirky religious education teacher Mrs. Butterfat. Angeliea Stark (Violet) and Kiley Lotz (Ruth) play two saucy teenage schoolgirls — determined to get out of their Australian town and see the world. With the arrival of a new teacher — the bubbly and optimistic Miss Harmony, or Miss H for short, (Georgia Cohen) the girls start to look inside themselves and aspire to follow their passions — especially Violet with her photography. Rounding out the school faculty is the no-nonsense Mr. B (Jens Rasmussen) who is firm with his students, but seems to have a soft spot for Miss Harmony.

The girls are given a glimpse of a different and more enchanting world, as a Japanese businessman Taka (Daniel K. Isaac) climbs out of the earth unexpectedly, and shakes things up. Everything from his language to his dress excites the girls, especially Ruth, as she becomes obsessed with digging a tunnel to China and exploring new and magical places. 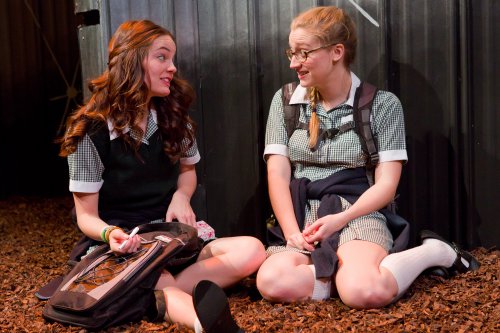 With the Australian landscape serving as the backdrop for this colorful cast of characters, the minimal props of mulch, garden tools, and outdoor supplies used to represent the schoolyard and surrounding areas was effective in portraying the barren and dry land. Sightings of threatening creatures such as crocodiles were advertised and would later serve as a reminder of all the violence and darkness that this town also contained.

Scenic design for Underland is by Gabriel Hainer Evansohn, with lighting by Burke Brown. Moria Sine Clinton lends her talents as costume designer, and matches the personalities of the residents with her unique styles. Sound design is by Elisheba Ittoop.

Navigating the “worlds” separated by the tunnel would prove to be the biggest test, as everyone had something that they wanted to escape. The potential “happy” ending depended on how willing an individual was to accept their fear of the unknown, and then, maybe, the bright lights weren’t so far away. While happy endings weren’t in the cards for everyone, the tale proved how important choices are in life and that a better life can exist after you endure the flames.

Exploration and curiosity unearth a reality that is terrifying, enchanting and mystifying with a cast that brings the journey to life.