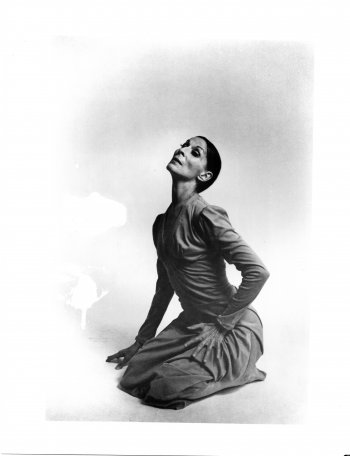 Deborah Zall has been a presence in the modern dance scene, specifically in the Martha Graham orbit, for decades.  Recently, after years of relative obscurity, she has emerged as an important choreographer, the keeper of the dramatic Graham tradition.  Several current and former Graham dancers, wanting new experiences and challenges, asked Ms. Zall to stage some of her dramatic solos for them.  The result was an evening of intriguing small-scale works by Ms. Zall with the addition of a solo created by Graham veteran Kenneth Topping which provided a bit of comic relief, albeit sardonic comic relief.

Ms. Zall uses the old-fashioned Graham vocabulary well.  Bodies actually vibrate from inner pain as the feet thrum against the floor and fists against the heart.  Sudden collapses—called falls in the modern dance vocabulary—happen at peak emotive moments.  The dancers literally pulsate from head to toe.  In our current period, the techniques of choreography are more free-wheeling with ideas and egos more important than movements.

Three works were based on plays.  “Mary Tyrone,” danced by Nya Bowman, exposed every raw nerve of this character from Eugene O’Neill’s Long Day’s Journey into Night as she contemplates giving herself a fix of morphine.  She remembers happier times, dons her wedding dress, and sinks into oblivion, all to the angular strains of Schoenberg.

“Amanda” to a score by Stephen Weinstock, danced by Erica Dankmeyer, is an intense look at the mother in Tennessee William’s The Glass Menagerie as she contemplates herself in a mirror.  The woman she sees in the mirror isn’t the one she wants to see.  She still thinks of herself as young and flirtatious in a fancy gown, her body taken over by remembrances of cotillions and old beaux.

“George Sand,” to Chopin, of course, begins with the title character, Kim Jones, clad in black, seated, bent over on a bench to which she keeps returning. She constantly dangles a red ribbon which could represent anything from blood to passion.  At one point she placidly bends backward over the bench, a calm soon replaced by sharp leg raises and pulsating grieving movements. At the end she murmurs, “Will my despair ever leave me?  Is it possible to die of love?”

The most intricate work was “Shadow of Her Sister,” the oldest work on the program, danced to music by Robert H. Waldman.  It’s a condensation of elements of García Lorca’s La Casa de Bernarda Alba.  Older, hidebound Angustias (Lauren Newman) holds sway over her younger, more sensual sister, Adela (Dani Stinger).  Adela gets to feel her sensuality for only a moment when she is literally wrestled into submission by Angustias.  The costumes suggested not only the repressive period in Spain, but also the personality traits of each character.  The movements had a broader palette than the other works, perhaps because it was a duet. 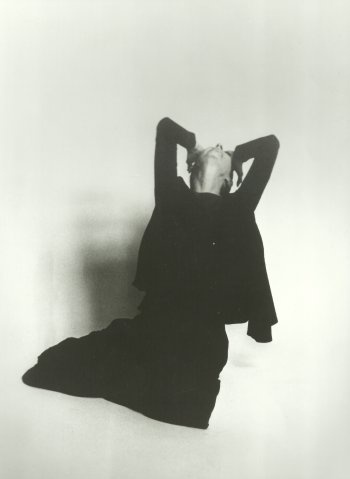 “Sonnet” is based on a well known poem by Edna St. Vincent Millay about being unable to forget a lost lover.  Carrie Ellmore-Tallitsch performed slowed down, stretched out movements, simple, but eloquent lunges and rolls on the floor, her head constantly turning in all directions as if wanting to receive communications from her lover.

In “Miriam,” to music by Stephen Weinstock, Ms. Zall as Miriam dances with her younger self (Blakeley White-McGuire) while images of a man, presumably a romantic partner, are projected on the back wall.  Ms. Zall, can still lift a leg and zip around a stage.  She related well to both her three-dimensional partner and the two-dimensional one.

Mr. Topping’s “Auto-Manic” was a solo for Gildas Lemonnier, a yuppyish, well-dressed young man.  Mr. Topping cleverly used a montage of FM radio stations, from news reports to Latin music to traffic reports, making an anxious, noisy soundscape.  Mr. Lemonnier is at first fairly relaxed but slowly speeds up, constantly changing direction, getting more and more agitated, loosening his shirt and tie, pulling out his pockets nervously as he runs and stomps about, his face a study of confusion.  The work is about “information overload” and Mr. Topping succeeded in communicating the anxiety and absurdity of our modern electronic world.

Perhaps in the future Ms. Zall will produce some happier works or larger group ballets.  Even Martha Graham displayed a sense of humor occasionally!

The dancing was excellent throughout.  Although the production values were simple, the show was totally professional.  Farley Whitfeld produced sensitive lighting while Tsubasa Kamei cued the music perfectly.  The costumes by A. Christina Gianinni were eloquent.

Running time: 90 minutes including one intermission