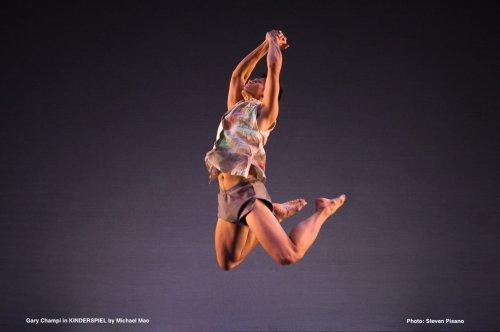 Michael Mao Dance is celebrating 26 years of presenting Mao’s work and if his recent program at the Ailey Citigroup Theater is any evidence, there is reason to believe he will continue for another 26 years.  His works are varied, yet clearly come from the mind of the same artist.

His opening work, “1994 – DSCH,” set to a dark string quartet by Dmitri Shostakovich, composed in response a visit to a devastated Dresden after World War II, was the dramatic highlight of the program.  Taking his cue from the music, Mao produced a work that wordlessly explored the darkness of war and its terrible effects on the human spirit.

Dressed in simple two-piece grey outfits—evoking those worn in prison camps—the dancers moved in groups that continually break up into solos and duets filling the stage.  In the opening movement of the dark, barely tonal quartet, the dancers flung their limbs almost hysterically, falling onto the ground, rising and falling again and again only to coalesce into sculptural groups. 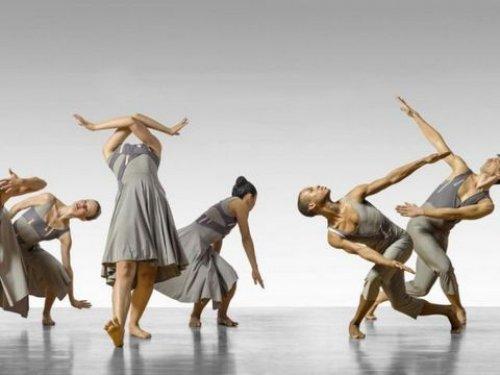 In the next section they walked almost zombie-like, staring into space, divided into a crouching group and a swaying group, both of which cross paths.  They pulled off each other in long lines, ran about frantically, sometimes carrying each other and generally acted in a frightened manner.  In the final movement, Mao pulls out all the stops with an image of the entrance to Auschwitz projected onto the back curtain, an image that draws the dancers—not to mention the audience members—inexorably towards it as the image gets larger and larger as the lights dim on this sinister image.

The costumes were byLynne Steincamp and George Hudacko and the moody lighting by Will Knapp.

“Weaving,” to a percussive score by Leonard Eto incorporating drums and voices, was, superficially, a romp in which two couples—Nina Chong, Antonio Fini, Raffaele Iorio and Cammi Nevarez—playfully cart-wheeled, jogged, stretched, crouched and used each other as stepping stones.  Wearing Andrea Huelse’s black and red outfits, the two men bare-chested, they all bounded about, skipping, sometimes doing unison turns and tilts. Somehow what should have been four young, fit dancers having an acrobatic free-for-all had a sad ambiance, despite all the expended energy.

“Written on the Wind” evoked Mao’s Chinese heritage.  Huang Ruo’s score, full of typically Asian half and quarter-tone glides and the sharp voice of a soprano, became the background for a mysterious ritual begun by a bare-chested man (Gary Champi) in loose white pants and a cylindrical peasant hat.  He carried a small gong in each of his hands as he glided around two women (Cammi Nevarez and Michela Serra) covered in white cloth.

Each woman emerged, like a butterfly out of a cocoon, to whirl about in her own world as the man stepped about clanging his gongs.  His steps had a stylized martial arts feel while one woman moved slowly and the other twirled as she nervously waved a fan. A shift in roles ended the work, deepening its inscrutability.  All the action took place in front of Shawn Duan’s video images of dark forests.  George Hudacko’s folksy white costumes enforced the myth-like ambiance. 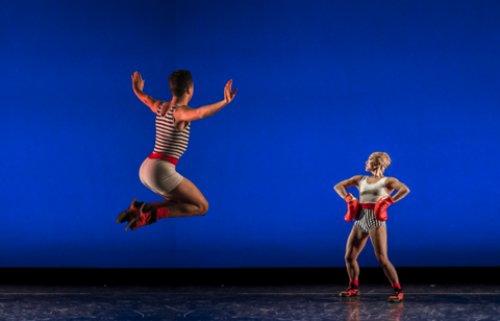 The final work was “Riddles,” here performed by students from the Marymount Manhattan Dance Department (Katie Logan, Chair).  First performed in Paris in 1990, the work, to quite recognizable music from Kurt Weill’s musical theater opuses, was reassembled with great care by Stacy Yoshioka, meeting with Mao’s approval.

“Riddles” was at first rife with boxing and gymnastic movements (complete with red boxing gloves, a recurrent theme), body bumping and stomps.  A second movement, to “Mack the Knife” introduced an angular, but playful, battle of the sexes duet.  Several twitchy duets flew across the stage followed by slower, more graceful partnering morphing into ballet inspired lifts and steps as the music changed.  An up tempo finale found the cast in a line of leaps and spins.  “Riddles” was kind of silly but allowed these up and coming dancers a chance to show off.

Mao was a genial host and clearly loved by his dancers who are all technically assured and musical.

Dance works that are varied yet clearly from the mind of the same artist.