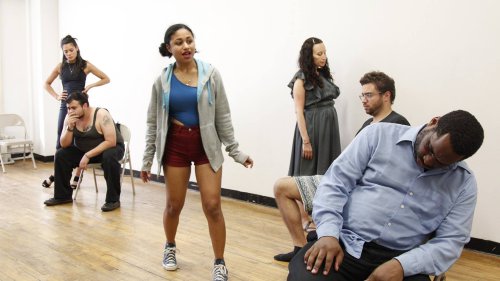 The cast of “WHO AM I” (Photo credit: Jazmyn Arroyo)

A leggy dark blonde young woman with her hair pulled up, wearing a black skirt, a patterned short gray blouse and high heels walks through the audience and onto the bare black stage.  She begins dancing and then is joined by two lovely young female dancers in psychedelic tunics and all three perform Valerie Mae Browne’s beautifully choreographed modern dance accompanied by mellow pulsating electronic music.  It’s all something that would not be out of place on a program at The Joyce Theatre.

The blonde goes out into the audience and engages people and beckons some who gather in the theater’s aisle.  They turn out to be the cast of WHO AM I. This is the enthralling 10-minute opening sequence of this labored but beguiling 90-minute play.

Author Rodney Reyes has created an intriguing surrealistic collage with emotionally raw dialogue that for the first half is frustratingly vague but becomes clearer as it builds to its poignant finale.

It takes a while to fully discern the identities of all the characters.  There is a young male drug addict visited by God in the form of the blonde woman from the beginning and the two dancers who are her “functions.”  The apparition of her mother who abandoned her many years ago haunts an embittered woman in her 30’s.  A disaffected and solipsistic man clashes with an alluring woman who is the physical representation of his inner transgender self.  The young girl he created as a comic book character plagues a drunken comic book writer whose wife left him because he couldn’t father children.

These murky interconnected vignettes eventually are all resolved with Twilight Zone style twists and surprises.  The theme of a creator clashing with their creation becomes evident.

Director Janelle Zapata’s staging has the cast of ten strategically arranged on the small stage throughout much of the show and adeptly weaves the separate interactions among the four duos.   Ms. Zapata creates plenty of striking imagery in the limbo terrain.

Jason G. Rader’s expert lighting design often has the actors’ faces in half shadows, abrupt brief blackouts between scenes, and bursts of brightness and dimness all conveying an other worldly dimension.  The sound design of Christina Daly adds to the moodiness with artfully blended music and sound effects.

The long raven haired, sleek and charismatic Jenna DiMartini is magnetic as the inner psyche of the transgender man.  Ms. Di Martini’s face and eyes are highly expressive and her performance is simultaneously fierce, comic and empathetic.  The dynamism of her physique and persona make it appear that she’s about to play Lola in Damn Yankees, the title role in Sweet Charity or a number of the roles in Chicago.  Clad in a taut black dress, DiMartini is like a sensual present day vision of a Bob Fosse performer.

Gladys Hendricks is a delightfully deadpan and enticing God with her luminous presence and accomplished acting and dancing skills.  Amy Miller and Erin Quarrels (alternating with Saeko Hayashi and Leanne Gioia) are tremendously appealing as her dancing “functions” and remain onstage assisting in actions and as part of tableaus.

Though turgid at times, the ambitious and passionate WHO AM I contains mesmerizing opening and closing sequences.