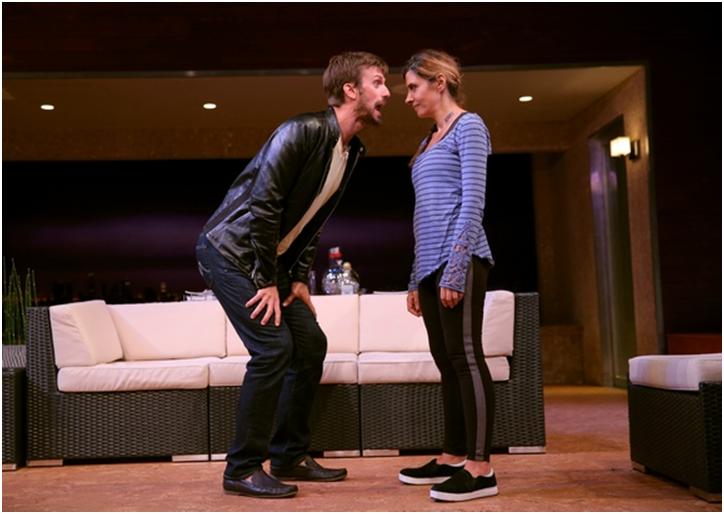 After an hour of its characters prattling on, the actual plot of “The Money Shot,” a tepid Hollywood satire, written by Neil LaBute is finally revealed. When it does, it comes across as hackneyed, and in light of contemporary sensibilities, not as shocking as it is supposed to be.

Mr. LaBute is known for a series of films and plays he wrote and/or directed that include “The Company of Men,””Your Friends and Neighbors,””The Shape of Things,””Fat Pig” and “Reasons to Be Pretty.” In these works and a number of others, relationships between men and women are scabrously explored, and concluded with an unsettling denouement. This play wanly follows this formula.

We’re on the luxurious patio of a house costing “seven and half” (presumably millions), “High in The Hollywood Hills,” belonging to 40ish movie star Karen and her film editor/lesbian lover Bev. Their guests for dinner and lots of drinks are 48-year-old vacuous action movie star, Steve (though some sources put his age at 50 which he adamantly denies) and his wife of one year, 24-year-old Missy. 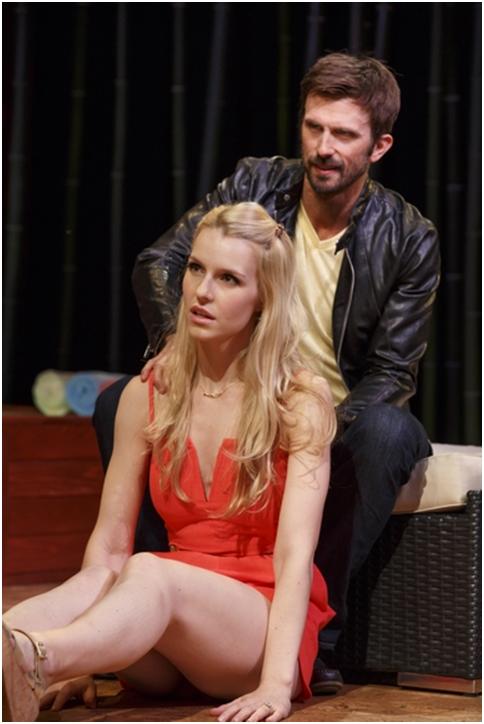 Steve and Karen are co-starring in the currently shooting, upcoming, hoped for Hollywood blockbuster, “Jack Hammer,”concerning the clash of a female police detective and a criminal billionaire. In order to insure it’s success through advance notoriety and publicity, the director wants to film them having actual sex. How the possibility of this affects everyone involved is the delayed conflict of the play.

Prior to this revelation, we’ve been introduced to and mildly entertained by the characters’seemingly inside Hollywood dialogue. Deals, money, vicissitudes of careers, name-dropping branding, real estate,tweeting, art versus commerce, and body fixations are lampooned.

Those aware of HBO’s “Entourage,” films such as “S.O.B.,”plays such as “The Big Knife” and “Speed-The-Plow,” and numerous other works will probably have a sense of overall déjà vu.

While the familiar satire presented in “The Money Shot”is amusing in patches, it s energized by the strong performances of its spirited cast.

Lanky, animated, and with his characteristic twang, Fred Weller is very lively and appealing as the dim franchise star Steve. Elizabeth Reaser winningly captures the insecurity and self-absorption of the fading female star Karen. With physical sight gags to work with, such as a bizarre cheerleading dance inspired by Arthur Miller’s “The Crucible,” and overindulging in hors d’oeuvres, GiaCrovatin makes the most of the proverbial blonde bimbo Missy. Very impressive is Callie Thorneas Bev, the bespectacled stereotypical symbolic mouthpiece for idealism and morality in Tintseltown. She brings feistiness, intelligence and reality to the role as well as great physicality that is required for another plot twist.

From Steve’s white T-shirt under a thin black leather jacket, jeans and black loafers, to Karen’s purple evening gown, Sarah J. Holden’s witty costumes present the celebrity characters as if they had just come from parading at a movie opening on the red carpet.  Missy’s scarlet short dress and gold belt instantly cry wannabe and Bev’s common place athletic getup looks straight off the rack at The Gap are further examples of Ms. Holden’s pinpoint perfect, accurate, visual shorthand as to who these people are.

Looking at scenic designer’s Derek McLane’s detailed and expansive appearing set feels as though we really are in The Hollywood Hills. A burning fire, shrubbery, modern furniture, an offstage kitchen, bedrooms on the second floor, a Jacuzzi and a large picture window with a panoramic view of the area are among the excellently designed realistic touches.

Director Terry Kinney has finely and purposefully staged everything, serving the material well which is a thin, well-played, farrago of movie industry archetypes enmeshed in a tired scenario.