Kathleen Littlefield and Eric Loscheider in a scene from “The Man of the Hour” at Metropolitan Playhouse (Photo credit: Tahiat Mahboob)

After a slow opening scene, this exposé of corruption in city politics versus personal integrity crackles with electricity. Although George H. Broadhurst’s The Man of the Hour is from 1906, you will be on the edge of your seat with its exciting twists and turns. Once Leonard Peters’ elegant and polished production for Metropolitan Playhouse gets past the opening scene, the tension mounts to fearsome heights. What is most surprising about this 109 year old play is how little things have changed. The large cast includes wonderfully detailed performances by Eric Loscheider, Kelly King, Dared Wright and Kathleen Littlefield. Racking up an impressive run of 479 performances over two years back at the turn of the last century, The Man of the Hour was the hit of its season and set a record for a straight play that was not bested for a long time to come.

While Broadhurst is most famous today for the Shubert theater named after him on 44th Street, in his own time he was an expert at light comedy and the author of 48 Broadway plays between 1896 and 1924. While The Man of the Hour is in no way an historical play, it does expose the excesses of New York’s Tammany Hall, the Democratic Party’s political machine, and parallels the election of 1897 in which Tammany Boss Richard Croker engineered the accession of Robert A. Van Wyck to the mayoral chair. Proof that reform of politics is on Broadhurst’s mind is that he refers to progressive leaders Wisconsin Senator Robert La Follett, Missouri governor Joseph W. Folk, and President Theodore Roosevelt, all of whom ran on platforms to clean up corruption. The reading text of The Man of the Hour actually indicates where the play’s Boss Horigan reiterates the policies and dictums of the real life Boss Crocker.

Set in the conventional four act structure of the time but performed with one intermission, The Man of the Hour takes place in “any large city in America,” to suggest that corruption is part of the fabric of our society. Millionaire playboy Alwyn Bennett who has inherited a fortune from his late and respected father is in love with heiress Dallas Wainwright. Although she secretly loves this friend she has grown up with from childhood, she tells him that she will not consider his offer of marriage until he makes something of himself. When Boss Horigan and her uncle and guardian, railroad tycoon Charles Wainwright, offer Bennett the chance to become the city’s next mayor, he jumps on it, warning them that if elected he will keep his oath of office. They, on the other hand, expect he will do their bidding once in office.

Four months into his term as mayor, Bennett is presented with a dilemma. A bill for the Borough Street Railway Franchise has been proposed by Horigan and backed by Wainwright, both of whom stand to make large fortunes if it is passed. However, to the upright Bennett the fact that it gives the company the rights to a subway line in perpetuity for very little money is totally dishonest. Unfortunately, if he vetoes the bill on the grounds of graft, he decidedly loses the woman he loves as well as his political future. What is he to do? 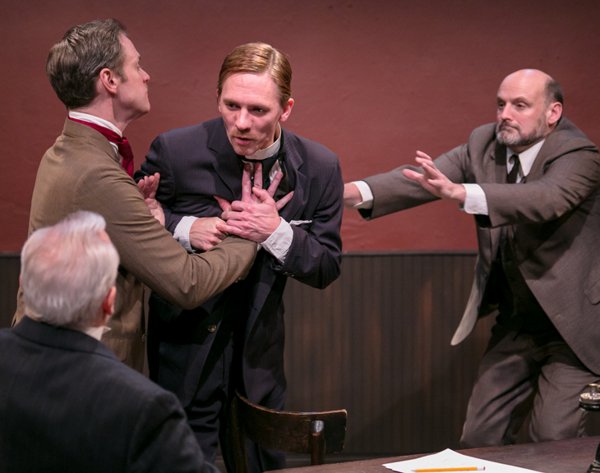 Bill Tatum, Eric Loscheider, Jed Peterson and Dared Wright in a scene from “The Man of the Hour” at Metropolitan Playhouse (Photo credit: Charles Figlow)

The play follows the events in the corridors of power to the night of the Administrative Ball and ultimately, the two committee rooms on the day of the city council vote. The twists and turns of the fight once the plot is wound up will leave you breathless in the ups and downs of Bennett’s fortune as the political hacks and millionaires try bribery, blackmail, extortion and coercion to get what they want from the aldermen and the mayor. Some things never change.

Though the play is definitely a melodrama of the old school, Peters’ direction has created full-bodied three-dimensional portrayals of the main characters. As the stalwart hero who finds himself mayor, Loscheider is charming, debonair and charismatic, journeying from trivial playboy to a heroic spokesman for integrity in public life. King’s Boss Horigan is as tough as a bulldog (as he is described) and a formidable adversary, attempting to blast everyone and everything out of his way. As Alderman Phelan, the only independent in the city council – not in Boss Horigan’s pocket, Wright gives a juicy portrayal of a man of the people, who thoroughly enjoys his job.

The beautiful Littlefield makes Dallas a woman of courage and spirit, one that any man would admire. Susan Wands as Alwyn’s mother, Mrs. Bennett, is an understanding and loyal woman to the manner born. Among other notable performances are Bill Tatum as the corrupt millionaire Charles Wainwright, Matthew Sanders as Dallas’ other millionaire suitor, Ashley Springer as Dallas’ playful and high-spirited younger brother, John Rengstorff as a weak and dishonest  judge, and Jed Peterson as Mr. Wainwright’s private secretary with a secret all his own.

The clever set design by Carrie Mossman for the four locales allows for quick changes on the small Metropolitan Playhouse stage and deftly suggests the period of the robber barons without a great deal of trappings. As always Sidney Fortner’s period costumes for this rich milieu are a wonder to behold. Christopher Weston’s subtle lighting always directs attention where it needs to go. Annmaria Mazzini is responsible for the ballroom dancing in the third act.

While George H. Broadhurst’s The Man of the Hour is decidedly a melodrama, it is an example of the best of the variety. Under Leonard Peters’ assured direction, this is one of the Metropolitan Playhouse’s finest hours and a real discovery in the genre of political dramas. This is a fine addition to their 23rd season on Progress.