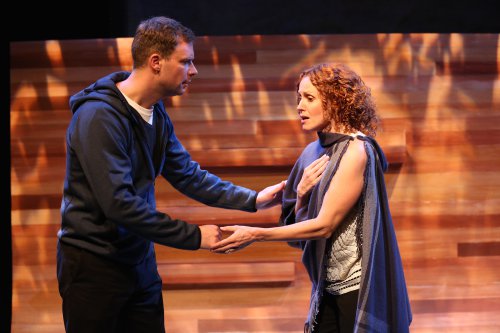 Helen Edmundson’s The Clearing, an original historical play, deals with a time in Irish history little known to most Americans: the period between 1652 – 1655 when Oliver Cromwell, the English Puritan Leader, conquered Ireland and then proceeded to punish those who had fought against him with a systematic genocide which included mass evictions, killings and deportations to the West Indies of men, women and children. Catholicism was outlawed and Catholic priests and Presbyterian ministers were killed on capture. Eventually this ethnic cleansing removed 50,000 people. The policy was known as “to Hell or Connaught,” the town to which the Irish were forcibly being relocated.

The Clearing tells the story of two families and two single people. As a younger son, Englishman Robert Preston has inherited an estate in County Kildare and has married Madeleine, an Irish wife who has given him a son. All he wants is to be left alone to develop his land. When the repressions begin and the transporting are announced, he thinks it will not affect him or his wife. However, when his wife’s childhood “sister” Killaine Farrell is arrested to be transported, they must take sides. Robert chooses to side with the English overlords, while Madeleine chooses her own people.

Their older neighbors Solomon and Susaneh Winter are English landowners who supported the deposed King Charles I and they are among the first to be told they must leave their land for Connaught. They attempt to fight the transportation demand by petitioning the cruel and implacable governor of the district, Sir Charles Sturman. The play also follows the paths of Killaine who is abducted and Maddy’s childhood friend Pierce Kinsellagh who joins the Irish rebels and becomes an outlaw. 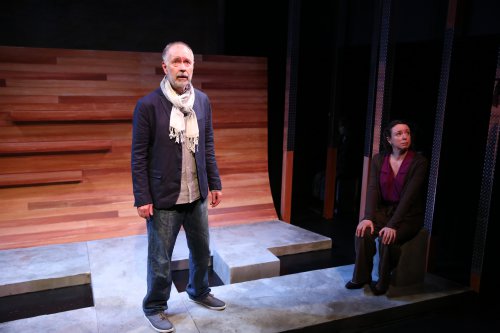 Director Pamela Moller Kareman has made several problematic decisions which hang over the production. The costumes by Kimberly Matela are all contemporary even though the play begins in 1652. One assumes that this to point out to the audience the modern parallels of other examples of ethnic cleansing in our own time. The play is told in 24 scenes and resembles a movie script. However, Jason Bolen’s unit set made up of wood slats suggesting both a wall and a forest has little or no atmosphere so that most of the scenes look alike even though they take place in various locales. The first half of the evening has a very slow buildup as most of the events are exposition and the play develops at a snail’s pace. While the second half moves more quickly as the tension mounts when the roundup of Irish and English families who supported the king increases and their land is confiscated, the damage has been done.

The women are generally much better than the men. In trying to make Robert Preston as English as possible, Jakob von Eichel is extremely bland, showing a stiff upper lip and little emotion. On the other hand, as his wife Madeleine, red-headed Quinn Cassavale is both radiant and passionate. David Licht is rather one-dimensional as frightened Englishman Solomon Winter while Tessa Zugmeyer as his wife Susaneh whose anger fuels her coping ability gives a much more varied and interesting performance. As Killaine Farrell whose abduction causes the rift between the Prestons, Lauren Currie Lewis is a vibrant young woman of many emotions. Hamish Allan-Headley’s fervent Irish rebel brims with life. As Sir Charles Sturman, Neal Mayer is both sinister and menacing as the ruthless English governor who feels his righteous indignation against the Irish is justified. Ron Sims appears in several small roles.

Playwright Helen Edmundson whose stage plays have been mostly adaptations of famous literature (The Mill on the Floss, War and Peace, Anna Karenina, as well as Coram Boy and Thérèse Raquin both seen on Broadway) tells her story in the leisurely way one might write a novel. While the material is both shocking and surprising, director Pamela Moller Kareman has undercut the inherent tension in the play by the choices she has made.