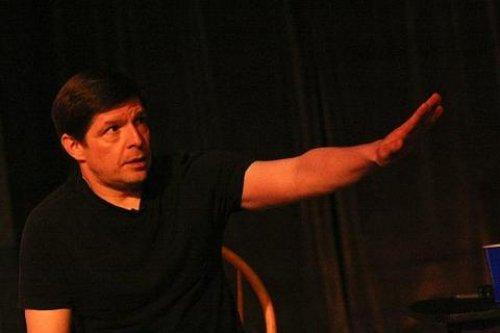 Bob Brader in a scene from “Spitting in the Face of Devil” (Photo credit: Tracy Olsen)

The “Devil” is a 1970’s abusive Pennsylvania ex-Marine who died of a heart attack in 2003 at the age of 58. The jolting revelation that he was also a pedophile occurs halfway through his performer son Bob Brader’s lacerating self-written solo play, Spitting in the Face of the Devil. We’re in the Pat Conroy territory of paternal malevolence found in The Great Santini and The Prince of Tides but worse.

Mr. Brader is an engaging and soulful performer with a smooth and pleasing vocal delivery. Brader is an admirer of Spalding Gray and channels that monumental artist’s impassioned sense of storytelling. As a writer, he offers a vividly candid but somewhat flawed treatment of his explosive autobiographical material. Arguably a tauter and more focused scenario would flow more effectively.  Still, Spitting in the Face of the Devil ultimately achieves redemptive impact.

The first half of the 90-minute show is a rather leisurely reenactment of increasingly painful episodes that chronicle a dysfunctional working class childhood with a dark sense of Jean Shepherd-style nostalgia. Period pop culture details abound with choice references to Earthquake, Scared Straight, Battle of the Network Stars and Billy Joel. 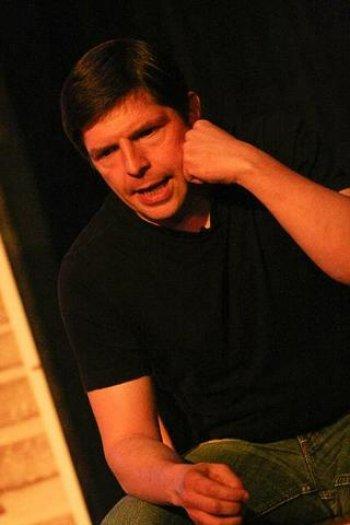 Bob Brader in a scene from “Spitting in the Face of Devil” (Photo credit: Tracy Olsen)

The joyous pastime of  watching movies at local theaters is shattered by the intrusion of a sexual predator. A sympathetic school guidance counselor proves to be ineffectual. We starkly learn of his father’s penchant for surreptitiously having sex with Brader’s boyhood friends. There’s a hilarious sequence describing his roach-infested new apartment after he leaves the family. Shell-shocked by his traumatic upbringing, he descends into alcoholism and despair after escaping to New York City to become an actor.

Brader offers a cavalcade of impersonations of integral figures in his life to varying success. His Paul Lynde is priceless. He chillingly recreates his father with eerie gruffness. Some other characterizations are facile, yet the power of the narrative is ever present especially when he is himself.

Director and developer Suzanne Bachner’s sharp staging injects focus and momentum especially in the latter portion. The stage is set with a chair, a small table and a blowup of a family photograph of Brader’s maternal relatives. Significantly, there is no pictorial representation of his father. Ms. Bachner has Brader seated for a good deal of the time and strategically rising to animatedly act out his tale. Cory Pattak’s lighting design perfectly accompanies the recitation with dramatic blackouts, scorching brightness and angry crimson hues. 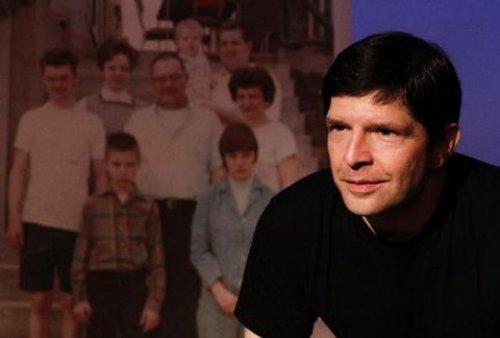 With its painful topic, intense performance and therapeutic tone, Spitting in the Face of the Devil is a searing experience.

This production is presented as part of “3 From JMTC.” JMTC Theatre is a company founded in 1994 that “combines art and advocacy to raise funds and awareness.” Spitting in The Face of The Devil plays in repertory with two other solo shows, The Good Adoptee and Smoker. Proceeds from this engagement go to You Gotta Believe, a foster youth organization and to the victim services agency Safe Horizon.