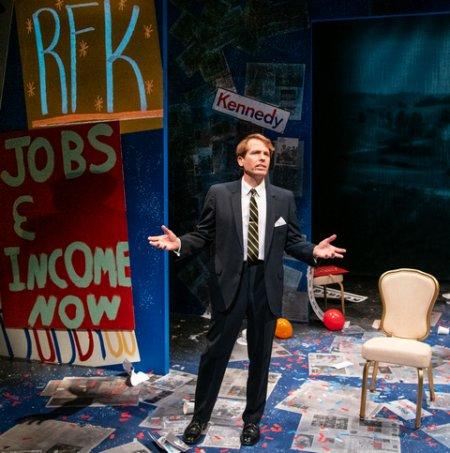 The monodrama Kennedy: Bobby’s Last Crusade, now at the Theatre at St. Clements, is not the first instance of actor-playwright David Arrow portraying Robert F. Kennedy. According to his Playbill biography, this American-born, British-trained performer previously played president John F. Kennedy’s younger brother “Bobby” in two separate productions of Jack Holmes’ play RFK. Casting Arrow as Kennedy makes obvious sense, as the actor bears an uncanny physical resemblance to the onetime U.S. Attorney General and senator. It was Arrow’s work in RFK, the bio explains, that prompted him to learn more about Kennedy and, eventually, to write the script for this show.

As its title suggests, the play (directed by Eric Nightengale), follows Kennedy during the last few months of his life, from March of 1968, when he entered the contest for the Democratic presidential nomination, to his fatal shooting in the first week of June at Los Angeles’ Ambassador Hotel. He was pitted in this campaign against the incumbent president, Lyndon Johnson, as well as Johnson’s initial challenger, Senator Eugene McCarthy of Minnesota. Shortly after Kennedy tossed his hat in the ring, Johnson—his presidency hobbled by the nation’s involvement in the Vietnam War—shocked the nation by announcing he would not seek reelection. Subsequently, Vice President Hubert Humphrey entered the race. Humphrey would eventually become the Democratic nominee but would lose the general election to Richard Nixon.

Arrow’s script is a sort of stage documentary, although it begins with a somewhat surrealistic scene from the fatal shooting following RFK’s victory in the California primary. It then flashes back to the beginning of his candidacy. Arrow delivers portions of many of Kennedy’s speeches from the campaign trail, but interspersed with these sequences are passages in which he speaks more informally to the audience about his motivations and feelings. It’s an episodic play, really. But Arrow tries, both as writer and actor, to create a dramatic arc for Kennedy, centered on his struggle to overcome his general discomfort with being in the public eye and, specifically, the inferiority complex he suffered from being always in his late brother’s shadow.

But this dramaturgical strategy creates its own difficulty. Arrow, in the early scenes, plays Bobby as such a retiring—sometimes almost recoiling—character that it’s hard to really connect with him. By 1968, Kennedy had been in positions of power for well over a decade and a half. But when we first view him here, he seems almost a timid political tyro. Arrow and Nightengale have the character eventually gain assertiveness and depth, when such incidents as the assassination of Martin Luther King in April and a humiliating loss to McCarthy in the Oregon primary in May test his mettle. But the early part of the play, filled with sequences of uninspired public speaking, don’t make Bobby a character the audience particularly wants to root for. With all that wealth, privilege and power, you may wonder, why is he so fretful and uncertain? 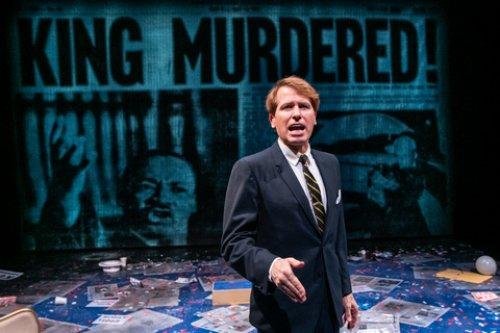 There are some fine elements in the portrayal. Arrow’s Kennedy-clan dialect seems believable—though maybe slightly over-baked at points (especially when, late in the play, he sings bits of Woody Guthrie’s “This Land Is Your Land”). Happily, he is able to suggest Kennedy’s deep compassion for forgotten, disadvantaged Americans. But because we don’t see him interacting one-on-one with other characters, he’s hampered in his ability to make this quality fully evident.

Technical elements help give the production a sense of scope that your ordinary one-person show doesn’t always manage. James Morgan’s scenic design (apparently meant to depict the deserted ballroom of the Ambassador Hotel after the shooting) is strewn with discarded newspapers, trampled campaign signs and sad confetti. The lighting design, by Miriam Nilofa Crowe, helps delineate which moments belong to the public Kennedy and which to the private one. Ben Scheff’s sound design helps evoke the hectic campaign ambience—giving, for instance, certain speeches an echoing sound, suggesting that Bobby is speaking in a giant auditorium. And Kathrine R Mitchell’s projection design is really quite engaging. Her images—often mysterious, slightly out-of-focus photographs from the era—fill the whole back wall of the stage. They’re sometimes reminiscent of images from a Ken Burns film. Supertitles with shuffling letters, meanwhile, fill the audience in on the dates and places of Bobby’s campaign stops.

Is Kennedy: Bobby’s Last Crusade meant mostly for those who remember Robert Kennedy or for those who were born decades after his death and know little of him? I imagine both groups may find something of interest in the production, as writer Arrow includes pointed references to blazing social issues of 1968—particularly gun control and racial inequality—that still burn hot now, more than a half century after the candidate’s death.