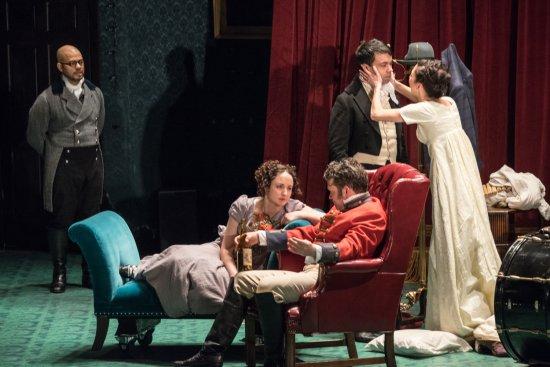 Following their brilliant and innovative stage adaptation of Jane Austen’s Sense and Sensibility for Bedlam, playwright Kate Hamill and director Eric Tucker have tackled Thackeray’s Victorian satire Vanity Fair for The Pearl Theatre Co. While not as entirely successful, this is another engrossing, terrifically acted play that remains faithful to the original book while making the text stageworthy. The problem with the play is its use of rows of lights around the stage walls which periodically light up and which continually remind us that we are at a carnival, distractingly breaking the mood of the play we have been watching. However, this Brechtian technique can be tuned out for greater enjoyment of the adaptation.

Tucker’s production uses seven actors playing 20 named characters plus members of the ensemble: the women (Joey Parsons and Hamill play one each, good girl Amelia Sedley and bad girl Becky Sharp, respectively) and the men play all the rest, including other female characters with the addition of wigs and slight costume changes. This allows the cast to demonstrate tremendous versatility in these juicy roles.

Taking its cue from the novel’s prologue, the play first presents Zachary Fine as the Manager of the show that is taking place at Vanity Fair. This allows him to be our narrator and occasionally comment on the action. This prologue which gives the characters a chance to tell us what they want reveals that they all desire Money, but Becky wants Everything. He also steps into the action as both Miss Matilda Crawley and Lord Steyne. Becky and Amelia occasionally turn to the audience and defend their choices and behavior in clever asides written by Hamill. Although Sandra Goldmark’s scenic design is minimal, the various pieces of furniture scattered around the stage are reconfigured to create the story’s many British and European locales. 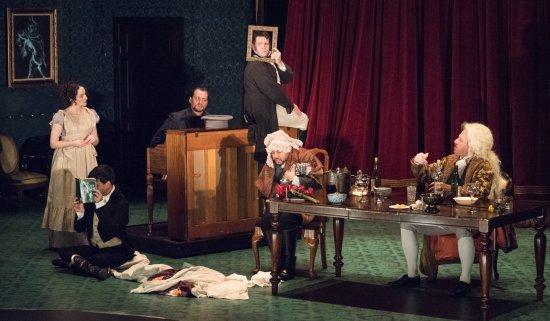 The play (as does the novel) parallels the lives of Becky and Amelia who meet as classmates at Miss Pinkerton’s School for Young Ladies. The innocent and good-natured Amelia being one of the daughters of the rich has befriended the cunning Becky who is a charity case and has neither family nor money. When the play begins the school year is over, and they are all leaving. Although Becky is to be a governess at the country estate of Queen’s Crawley, she has been invited to visit at Amelia’s London home. There she meets Amelia’s intended, the dashing Lt. George Osborne, his best friend Captain William Dobbin, and her rich overweight and dandified brother Joseph, aka Jos. Becky throws herself at Jos only to drive him away by her forward behavior.

At Queen’s Crawley, Becky meets the crude baronet Sir Pitt who falls for her as does his second son, the charismatic and well-meaning Rawdon, who is the favorite of their wealthy Aunt Matilda. When Sir Pitt’s second wife dies, he proposes to Becky only to find that she has married Rawdon. They are disinherited and have to live on his gambling winnings and his pay as an officer. In the meantime, Amelia’s stockbroker father has gone bankrupt and Mr. Osborne forbids his son from seeing her again. Dobbins, who has loved Amelia all along, intervenes and convinces George to marry her, but the dissolute George is also disinherited by his father. And so begins the parallel lives of Becky and Amelia. All the main characters meet up in Brussels when the British soldiers are deployed to fight Napoleon’s army. The results will change the course of events for all of the characters.

While the story covers about 15 years, the actors give layered, three dimensional portrayals of these iconic characters. Two of the actors are members of the Pearl’s Resident Acting Company, while two others have appeared in Bedlam productions. Parsons and Hamill make the women opposites. While Amelia is a character out of sentimental fiction it is to Parsons’ credit that she plays down her passivity and goodness and becomes a truly noble character. On the other side, although Becky Sharp is totally amoral and will do anything she needs to survive, Hamill downplays her vices so that she never reveals her vicious manipulation and conniving except in her choices. 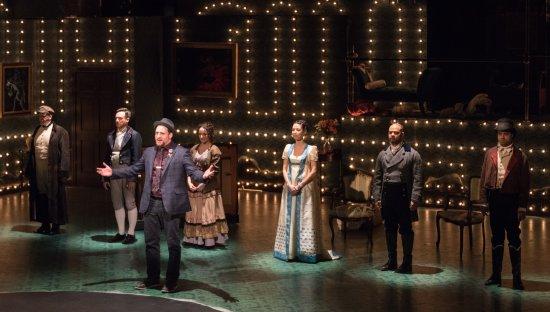 Aside from playing the dashing Rawdon, Tom O’Keefe (a Bedlam member) also appears as Amelia’s patronizing father, and the doddering General Tufto. Brad Heberlee runs the gamut from the foolish Jos to the crude Sir Pitt to the haughty Mr. Osborne to an imperial King George, as well as Miss Jemina, Miss Pinkerton’s ineffectual assistant, and the gossipy Lady Chesterton. Ryan Quinn makes Dobbin a gentlemanly cavalier in this nest of vipers, as well as playing the snobbish Miss Pinkerton and the weak and sickly second Lady Crawley. Debargo Sanyal is the dapper George Osborne as well as Aunt Matilda’s effete companion Miss Briggs and another gossip, Lady Bareacres. Fine steals the show as the self-centered Aunt Matilda and the aristocratic and dissolute Lord Steyne. As the cynical Manager and genial master of ceremonies playing off of the audience, he gets a great many laughs.

Along with red velvet draperies, Goldmark’s settings offer just enough to set the play in the early 19th century. The period costumes by Valérie Thérèse Bart are pitch perfect for both the men and women, as well as the men playing women. These are complemented by the hair and make-up of Dave Bova. Carmel Dean’s original music adds to the atmosphere. Only Seth Reiser’s lighting is problematic, periodically and obtrusively turning the stage into a carnival at various intervals. It is difficult to know whether this is a design concept or a directorial approach.

Thackeray’s 784 page novel on love, money and social climbing has been adapted into a concise and cogent stage play by Kate Hamill who has also given herself a magnificent role as she previously did in her Jane Austen adaptation. Director Eric Tucker has obtained the most out of his accomplished and skillful cast. This Vanity Fair is a TKO putting a huge and  seemingly unadaptable 19th century novel front and center on the stage of the Pearl Theatre. Thackeray would be pleased by this adaptation.