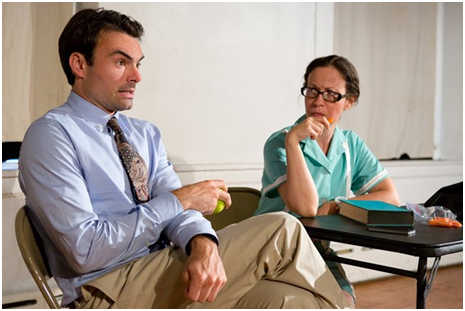 in a scene from Picture Ourselves in Latvia

Let’s have the good news up front: the six actors who make up the cast of Picture Ourselves in Latvia, none of whom I have seen before, are all doing very distinguished work with challenging material. Credit is also due New Light Theater Project director Sarah Norris for fashioning them into a smooth ensemble with a unified style.

Playwright Ross Howard gives us a locked-ward play. Set in a psychiatric hospital, we meet three long-term residents, their orderly, a nurse, and a doctor. The patients’ maladies are not specified. Mostly they seem merely simple, with mental ages of between roughly five and eleven, so it’s not clear why they’re in hospital rather than some sort of group home. Martin (Christopher Daftsios) in particular seems an innocent; Anna (Dana Benningfield), a recent emigrant from Latvia, is a bit paranoid; Duncan (Andy Nogasky) is intelligent but awkward like an early adolescent, and struggles with hydrophobia.

This simplicity is the first hurdle the actors conquer. It’s easy playing crazy, verbose, ticcy, or flashy; nothing like that here. These people are just slightly pithed, only intermittently blind to those around them, and showing that non-responsiveness convincingly takes discipline. More than that, each actor conveyed a believable inner life even when staring into space: for example, even the very first time Duncan quietly adjusted his hoodie, you knew right away that it really mattered.

Back in our story, these patients, with nothing to do but watch television, are bored to the point of misery. In their group therapy meetings, they ask for jobs, any jobs, even cleaning toilets, but for some reason the staff resists the request.

Said staff is only slightly more mature than the patients. Oliver, the orderly (Gregory James Cohan) is a pathological liar and bullies the patients mercilessly. Doctor Rupert (Christian Ryan) is a complete narcissist. Nurse Whitehall (Amy Lee Pearsall) is as close as we get to a functioning adult, and she’s got a major issue: just back at work after having her first child, she’s preoccupied with her crush on Doctor Rupert. It turns out that both Doctor and Nurse want each other–he’s married too, naturally–but neither is willing to risk rejection by declaring themselves, or even hinting broadly.

Again a note about the actors: Doctor and Nurse have several tricky scenes where they must show comic non-communication and missed cues without losing a sense of genuine emotion beneath it. Pearsall in particular refuses to rush and gets an unexpected moment of true feeling out of their final scene together.

And back in our story…well actually no, that’s pretty much the whole play. The situation is laid out for us clearly and efficiently in the first fifteen minutes, and then nothing at all dramatic happens for the next three-quarters of an hour. The orderly tells another tall tale, the patients ask again about jobs, the Doctor and Nurse again fail at flirting, there’s a mildly amusing dream sequence, but it’s all idling in neutral. Some interest finally arrives at the sixty-minute mark, when the orderly gives the doctor and nurse intentionally contradictory advice on how to bring their romance to fruition (which, of course, accelerates its coming to naught), but until then one wondered if the stopped clock on the back wall was meant as some kind of metaphor.

And maybe it was. Howard has subtitled his piece A Play about England, so it’s no stretch to see the locked ward is England, the Doctor represents the ruling class and/or politicians, and the Nurse the middle class. The orderly is the tabloid press (liars) and security forces (bullies) rolled into one, and the patients (I almost wrote “inmates”) represent the underemployed working class and immigrants.

Unfortunately the potential of this metaphor is untapped and not deployed to any further purpose until literally two minutes before the final curtain, at which point the author shows that working-class resentment of immigrants comes from an inexplicable scarcity of jobs. Fair enough (except for the “inexplicable” part), but this could have been done in thirty minutes instead of ninety. The other metaphor in play would be the inability of the Doctor and Nurse to speak their feelings directly, allegedly a typically English problem. Understood, but still undeveloped.

The play is set very specifically in the spring of 2013, as mentions are made of the death of Margaret Thatcher, and of Islamists gruesomely murdering a British soldier in a London street. I’m not sure if the period is significant, but it did help make the story feel grounded. One of the orderly’s tales is about the sinking of the Argentine cruiser Belgrano during the Falklands war. That attack was notoriously controversial at the time, but it wasn’t clear if the playwright expected us to remember that.

Structural and allegorical questions aside, Howard has the mechanics of his craft well in hand. The characters are all drawn consistently, and clearly they have inspired the actors. Taken separately each scene was well constructed, and he methodically varied the ten scenes: just patients, just staff, just women, just men, a dream sequence, a song, a full-cast scene, and so forth. His bio lists many short plays, so perhaps he’s still getting the knack of the full-length.

Picture Ourselves in Latvia (through August 9, 2014)

Access Theater, 380 Broadway, between Walker and White Streets, in Manhattan


Running time: one hour and 30 minutes, including one intermission