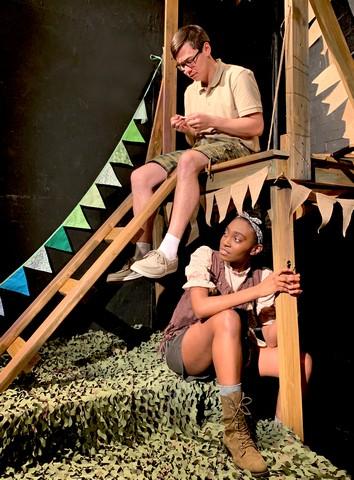 A spirited cast and a talented director do their best to bring playwright Katelynn Kenney’s heartfelt but leaden Wendell & Pan to the stage. It’s an unsatisfying family secrets drama laden with allusions to Peter Pan. The mystical revelatory sequence near the end and the protracted coda magnify the previously flawed writing. Tinkerbelle is represented by a flickering firefly in a glass jar and when released does cause a lovely effect.

Morose “Father” is overwhelmed as his distant father is dying and this is taking a toll on his marriage to “Mother.” Their precocious 14-year-old daughter Kayla is colorfully following her path. Wendell, their troubled 11-year-old son, is the only one of them who interacts with a cryptic vision of Peter Pan whom we later find out is a representation of a pivotal tragic figure. In addition, Kayla reads aloud from her grandfather’s tattered memoir which is another of the play’s weakly realized threads.

The aching sense of Ms. Kenney’s poignant aim of dramatizing familial grief and discord is palpable, but her command of dramatic writing is deficient. Realism and fantasy shakily connect, the dialogue is stiff, and the conclusion is underwhelming. The cast and creative team do as much possible to make Wendell & Pan stageworthy. 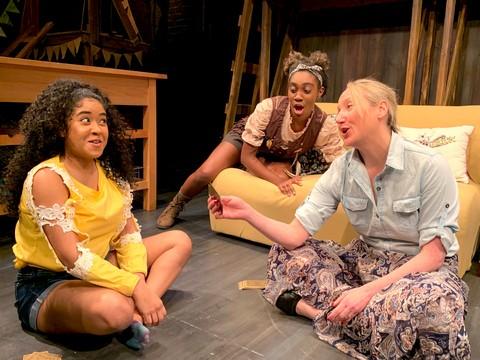 Clad in costume designer Sophie Costanzi’s witty regalia, the beaming Shavana Clarke is enchanting as Peter Pan, conveying the sense of flight with her animated presence. Bespectacled Nick Ong is quite moving as Wendell. Exhibiting supreme comic timing and intense facial expressions, the delightful Nya Noemi as Kayla seems like she’s from a television situation comedy ensemble. Margot Staub’s “Mother” is a marvelously warm and emotional characterization.  Emitting sadness, Anuj Parikh as “Father” manages to add sparks to his prevalent detachment as the play progresses.

Director Ria T. DiLullo’s lively staging adds vitality and fine pacing. Gavin Myers’ choreography has some pleasant moves throughout, particularly a duet between “Father” and Pan. The actions all play out on scenic designer Caitlynn Barrett’s great set that skillfully utilizes the minute stage, managing to add a small-scale epic scope. An ordinary living room and dining area is surrounded by a configuration of wooden platforms, ramps and ladders. These structures cleverly depict a roof and a treehouse that has a vintage ship’s steering wheel and a hanging antique lantern. It’s all very Peter Pan.

Miranda Poett ‘s lighting design richly achieves a wonderful dreamy dimension as well as starry motifs that are created by strands of holiday lights. Sound designer Emily Auciello vividly blends and alternates between the evocative music and bold effects. With subtle nods to “When You Wish Upon a Star” and Mister Rogers’ Neighborhood, the appealing melodies of composer Emily Rose Simons’ original score dynamically accompanies and accentuates the events.

Running time: one hour and 50 minutes with one intermission