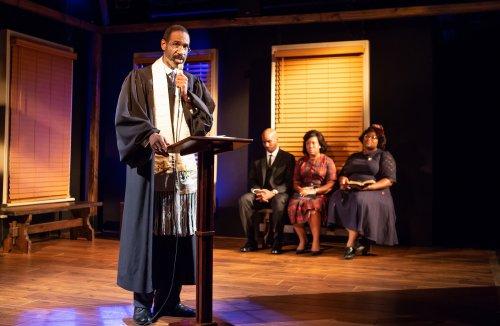 “This is not our country” exclaims a fiery young African-American activist in playwright William Jackson Harper’s gripping historical racial drama Travisville. The clash between mature pragmatism versus youthful idealism in relation to the civil rights movement is bracingly dramatized in a series of finely written short scenes.

Mr. Harper’s taut construction, solid plotting and detailed characters all yield to a suspenseful, emotionally shattering and entertaining experience. As in the works of Henrik Ibsen, Arthur Miller and August Wilson, Harper makes valid rationales for both sides of the arguments that are being fought.

The Travisville Project is an urban redevelopment mission in 1950’s Dallas, Texas, where a black neighborhood is to be displaced by a shopping center. With the tacit support of the relatively benevolent white mayor and the city government, the Honeycutt Corporation is offering residents low-ball offers for their homes. The Ministers Alliance, a confederation of black church leaders led by the aged, ailing and wily Elder Alden Hearst is supporting this scurrilous move out of practicality. Not riling up lower-class white racists is a major concern at the expense of justice. 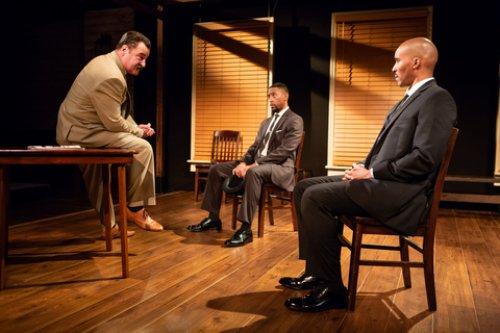 Hearst’s younger subordinates grapple with this ethical dilemma. The conflict is exacerbated by the arrival of the headstrong Congress of Racial Equality organizer, 23-year-old Morehouse graduate Zeke Phillips. In short order, he is arrested for leading a sit-in at a white restaurant that refuses to serve blacks and incites the home owners to resist selling their residences, with violence ensuing.

Brian D. Coats is towering as Elder Alden Hearst whether imperiously pontificating or preaching with gospel fervor. Depicting the character’s physical decline with balletic physical grace and later vividly accepting the error of his ways, Mr. Coats is awesome. Bringing depth and snappiness to the part of Zeke is the animated and emotionally volatile Sheldon Best. As the forlorn Minister Fletcher who is poised to be Hearst’s successor, Bjorn DuPaty offers a stirring portrait of a timid apparatchik achieving redemption. Nathan James portrays his rival, Minister Dunn, with compelling melancholy.

With chilling folksiness, Denny Dale Bess in the dual roles of the mayor and Mr. Honeycutt is slyly villainous. The commanding Lynnette R. Freeman is heartbreaking as the wife whose solid husband decides to fight. He is played by the affecting Shawn Randall who emits sorrowful dignity. Recounting the murder of her husband by racist marauders, Stori Ayers is haunting and as Minister Fletcher’s pregnant wife she expertly injects jocularity. Ivan Moore is forceful in his two supporting appearances. 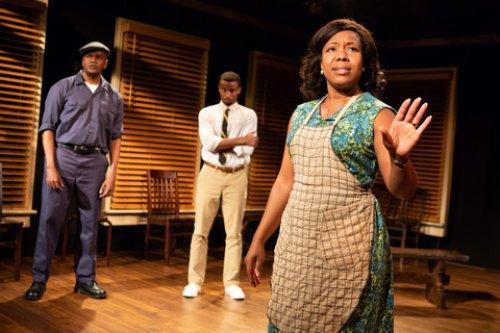 The L-shaped playing area is a spare vision of stark wood that scenic designer Milagros Ponce de León ingeniously configures into a spacious landscape that quickly represents various locales. There’s a wood frame around the ceiling, a few wooden furnishings that are swiftly rearranged, and large windows covered by wooden blinds.

Travisville rises beyond mere docudrama and quite successfully dramatizes the quandary of pursuing moral imperatives against dangerous and unfair forces.

In 1950’s Dallas, an African-American neighborhood is to be displaced by a shopping center. This gripping drama is finely written and flawlessly presented.