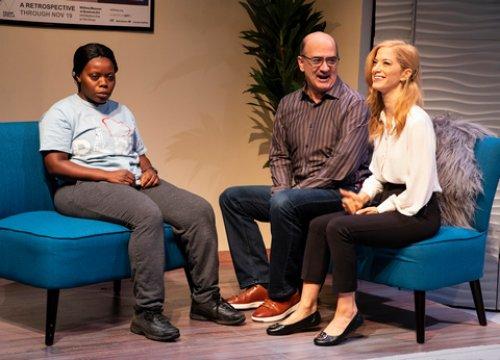 Noted film director Todd Solondz (Welcome to the Dollhouse, Happiness, Life During Wartime), has written and staged his first play, Emma and Max, at The Flea Theater. This world premiere turns out to be a devastatingly satiric look at the illusions of rich liberals in their dealing with the poor and needy. Having made films about the dark side of middle-class suburbanites, Solondz’s first play deals with New York City dwellers who are very well off and living with illusions about their involvement with other races and economic classes. His cast of four made up of Ilana Becker, Zonya Love, Matt Servitto (The Sopranos) and Rita Wolf, as well as  his production team, are totally attuned to Solondz’s caustic, cool view of life. Like his films, Emma and Max will upset some theatergoers, enthrall others.

Brooke and Jay are trying to fire their Caribbean nanny Brittany has who been with their children Emma and Max since they were born. Now that the children are three and two, their needs are different and their parents have hired a twenty-year-old au pair from Holland. However, neither Brooke nor Jay can explain to the hard-working Brittany whose work has always been satisfactory why they are replacing her without even letting her say goodbye to her charges.

Although neither Brooke nor Jay would admit to having a racist or bigoted bone in their bodies, when they realize that Brittany has gone home with their keys they become a little perturbed. Jay worries what if she gives them away to some friend or cousin, a drug addict or ISIS recruit, although Brooke is certain that the Barbados-born nanny is not a Muslim. Brooke is so certain that she is colorblind that when Brittany first arrived, Brooke claims to have known more about the black experience in America that she did and taught her “street-savvy sort of stuff.” 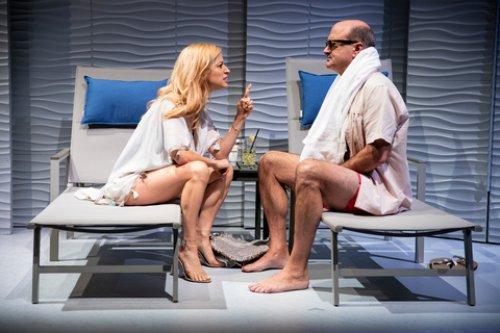 From their resort hotel on vacation in the Caribbean (where else but in Barbados) where they sit sunning themselves by the pool, Brooke complains about “The guilt, the shame … I’ve always felt for illegals.” This leads to her insisting that because of her chronic skin condition and overweight problems as a child which led to her being called “ugly,” she knows what it feels like to be marginalized. Jay who believes that “sometimes a stereotype is not just a stereotype” admits that he has fired a lot of people in his life, secretaries, messengers, maids, but claims not to have liked it. And then Brittany back home in Brooklyn decides to take matters into her own hands.

Known for his color-controlled film scenes, Solondz’s Emma and Max is no different. Julia Noulin-Mérat’s cool, clean set mainly in white and blue includes three walls with sliding panels. The mostly taciturn Brittany is required to push the screens and drag out all of the furniture (for all except the final scene), just as she would have done working for Brooke and Jay, which is a visualization of both the play and its theme. The privileged settings of Brooke and Jay’s life (apartment, resort hotel, first class on a plane) as well as Brittany’s room with no heat are beautifully depicted. The costumes by Andrea Lauer immediately define the characters as to their socio-economic class. Becky Heisler McCarthy’s lighting subtly adds atmosphere to the different locations.

Solondz’s mordant wit gives this the darkness of tragicomedies. Brooke and Jay’s delusions so typical of white entitlement are entirely their own. When we finally hear from Brittany, she turns out to be a keen observer of entitled white behavior and middle-class liberal hypocrisy. Though we never meet Emma and Max except on Brooke’s baby cam, their off-stage presence is felt throughout the play. As Solondz’s movies contain brilliantly written dialogue, he is a natural for the theater. While his movies are made up of mostly two character scenes, this technique transfers beautifully to the stage. The only flaw here is that the monologues which become rants go on a bit too long, long after we get the gist and the characters have given their many prejudices away. A bit of skillful trimming  – or the invention of more ideas would make this an even more powerful play. 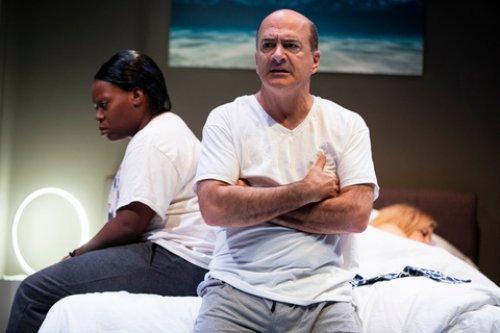 As the silent, taciturn Brittany, Zonya Love is potent in her very presence. We know a great deal about her life just from the set of her shoulders. Ilana Becker is hilarious as the upper middle-class wife and mother who has it all but is egotistical and unsympathetic, yet feels she is justified in her feelings. As the supportive husband Jay, Matt Servitto is pernicious as a man of power who has always used it to suit his own needs. Rita Wolf is amusing as both an ingratiating airline stewardess and a journalist of color who has her own hang-ups and blind spots.

Making an impressive stage debut with Emma and Max, satirist Todd Solondz proves that he is a very astute man of the theater. As acted by its shrewd quartet of players, Emma and Max is a devastating portrait of entitled urban white liberals who have never actually looked in the mirror to see how deep their prejudices go. Emma and Max may not be an easy play to watch but its rewards are great.