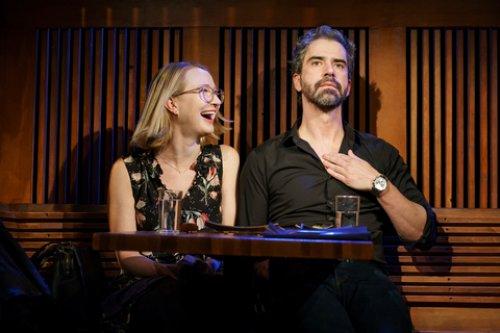 Halley Feiffer and Hamish Linklater in a scene from Feiffer’s “The Pain of My Belligerence” at Playwrights Horizons (Photo credit: Joan Marcus)

Jaw-dropping plot twists, painfully forced au courant dialogue, awkward sex scenes and a jagged central performance all make the world premiere of Halley Feiffer’s The Pain of My Belligerence a fascinating doozy of a bad play. The tone is a blend of Ingmar Bergman and Nora Ephron and the cosmopolitan milieu is reminiscent of Woody Allen and Lena Dunham. There’s the sensation of guiltily scanning a highway car accident scene that you can’t take your eyes away from.

The playwright is the daughter of the legendary cartoonist and writer Jules Feiffer and the noted humorist and actress Jenny Allen. Ms. Feiffer has been ubiquitous on the New York stage as a writer and performer. The rarified terrain on display is that of The New Yorker and Manhattan A-list movers and shakers as charted by an insider.

The three scenes are set in New York City and all tidily take place on Election Day in 2012, 2016 and 2020 allowing for topicality to waft over the events. The audience at a major not-for-profit theater gets to collectively gasp once again at Trump’s election.

Feiffer writes in an essay in the show’s program:

This play aims to explore the corrosive effects of the patriarchy on women and men alike — to examine the culture that has created the phenomenon of toxic masculinity and its insidious effects, and to start imagining ways we can break free from the bondage of our inherited ideology to form a new narrative — and in so doing, find freedom.

Such grand aspirations haven’t been fulfilled by the oddly contrived scenario. That the heroine is such a problematic person makes it difficult to support her point of view instead of the man’s. 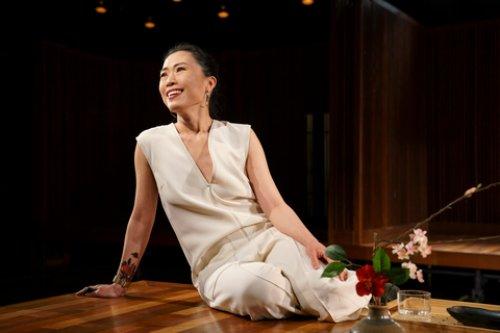 Vanessa Kai in a scene from Feiffer’s “The Pain of My Belligerence” at Playwrights Horizons (Photo credit: Joan Marcus)

Guy is a 40-year-old Anthony Bourdain-style buccaneering restaurateur and though he is married with two daughters is on a date. Cat is a 29-year-old New Yorker writer who two years earlier wrote a profile of Guy’s wife and business partner Yuki. They’re having this get-together in one of the couple’s trendy Asian restaurants. Instead of necessary biographical tidbits, Feiffer gives us a lot of smart aleck repetitious banter threaded with political correctness. A  tale of marble imported from Italy, culinary descriptions and rambling digressions are waywardly prevalent. The duo remain sketchily vague archetypes, the naïve young journalist and an older male overachiever oozing bravado.

Their subsequent affair is complicated by Cat’s suffering from Lyme Disease for which she didn’t seek timely medical treatment due to her fixation with Guy. In the outlandish third scene she’s debilitated in a wheel chair, bizarrely clueless as to how her living expenses have been paid for the last four years and other striking revelations and confessions are imparted. The show’s program is given out at the end to protect climactic surprises which this review does not disclose.

Though mostly presented with the actors clothed there are several highly suggestive bits explicitly depicting sexual intercourse and oral sex. These recreations are more distracting than titillating. Is it necessary for an audience of adults to be made acutely aware of who did what to whom while watching a play? Some may find this to be gratuitous filler striving to link sexual activity with personal behavior for profound effect.

Feiffer portrays Cat in the tradition of actors writing grand parts for themselves. However, though personable, she exhibits a modest capability for comedy but the tremendous dramatic scope she sets for herself is unfulfilled. Her raw histrionics and jarring orgasmic simulations do not realize a desired tour de force. 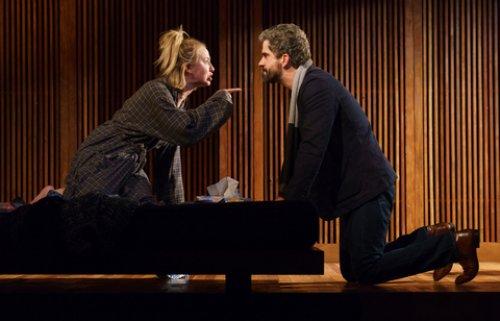 Halley Feiffer and Hamish Linklater in a scene from Feiffer’s “The Pain of My Belligerence” at Playwrights Horizons (Photo credit: Joan Marcus)

Displaying requisite charisma and conveying sensuality, Hamish Linklater‘s characterization of Guy is spot on. The athletic, lanky and mellifluous Mr. Linklater manages to successfully navigate through the character’s unlikeable traits with his winning presence. Linklater is the son of the noted vocal coach and theater practitioner Kristin Linklater.

Setting aside The Pain of My Belligerence’s agenda, its plot and characters haven’t been credibly crafted. The harrowing emotions aren’t matched by technical facility.