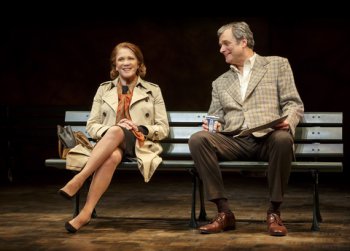 Linda Lavin wears Anna in Richard Greenberg’s Our Mother’s Brief Affair like a chic couture outfit with many layers each of which reveals layers of colorful, woven cloth.  There is a constant glow about her as she relates, mostly in flashbacks, the story of an illicit, but exciting affair with a stranger she met many years ago while waiting for her son, Seth (a bemused, but effective Greg Keller) to emerge from his Juilliard viola lessons.

The stranger she met in Central Park turned out to be a troublesome historic figure, causing consternation at the time for Anna and in the present for her son and his twin sister, Abby (a beautifully nuanced Kate Arrington) who listen in disbelief to the tale that their mother not only had an affair, but continued it after knowing the identity of her lover.

Directed by the Manhattan Theatre Club’s artistic director, Lynne Meadow, the loosely structured Our Mother’s Brief Affair somehow gels into a portrait of a family that hides a great deal from each other.  Aside from the mind-blowing revelation of the affair, there is Seth and Abby’s gayness which they accept with a quietness bordering on mystery.

John Procaccino plays the Lover whose “clean finger nails” close the deal with Anna.  He is a large, attractive man with a golden tongue who doesn’t seduce, as much as gently embrace the only slightly hesitant Anna.  As played by Mr. Procaccino, it is clear why he was exactly what Anna needed to escape from an unhappy marriage and the terrible feeling that giving birth to twins made her a social pariah.  She never quite took to motherhood, except its superficial duties, but still managed to raise two smart adults to whom she can, on her deathbed, unburden herself. 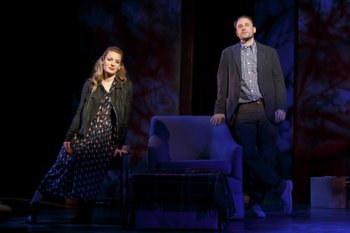 Our Mother’s Brief Affair has some structural problems, including the central surprise which takes the plot into too much historic nattering, but it does provide a juicy role for one of our great stage actresses, Linda Lavin.