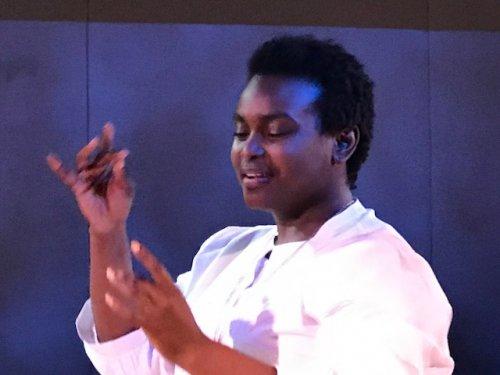 Lori Parquet as Mama Pearl in a scene from “The Cult Play” (Photo credit: Gerry Goldstein)

Wild, insightful and absorbing is author Topher Cusumano’s contemporary update of religious quackery, The Cult Play.  A sequence depicting the live stream of a cult leader’s sermon recalls the biting satire of Paddy Chayefsky’s Network with its behind the scenes cynicism.

In the grand tradition of holy hucksters, the charismatic Mama Pearl outdoes Elmer Gantry. When not going into trances and chanting, she’s popping pills, having sex with followers of both genders and ordering killings of enemies known as “monsters.” She strangled a cat as a child after it scratched her.

“The Northeastern Spiritual Center” is the yoga instructor, healer and life coach Mama Pearl’s domain.  She sends out her “Soul Scouts” who are disaffected young people into the streets to “canvass,” hand out flyers and solicit donations.  This homestead is a glorified yoga studio where spiritual devotion ceremonies are held, bodies are buried and where they all live together. The steely Papa Jaye is her henchman and romantic companion.

The contrived faith is centered around the vague precepts of “The Goddess” who will one day return to Earth. Blind obedience to Mama Pearl is the chief tenet and so is celibacy. Non-believers have “dormant souls” and are a threat.

We learn right away that there’s been flimflam as Mama Pearl’s brother, Charlie Bear has run off with financial records and other incriminating documents. Years earlier the group had to get out of Boston and has since started up shop in Pennsylvania. 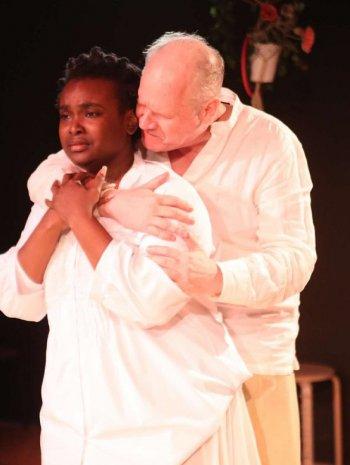 Lori Parquet and John Lenartz in a scene from “The Cult Play” (Photo credit: Gerry Goldstein)

Mae is a 30-year-old lesbian computer geek who is adrift after quitting her job as the social media consultant for a touring rock band.  With nowhere to go she follows one of the acolytes back to the compound.  Mama Pearl sees dollar signs after she explains how it’s possible to get donations online. Mae sets up a website for the group and things go viral.

Mr. Cusumano has crafted a scenario that though familiar is gripping.  The timeless craving for lost souls seeking a purpose in life by handing over their existence to charlatans is freshly explored here.  The dialogue is well-observed, sharp and occasionally very funny.  The play is peopled by a collection of characters who are all identifiable and have finely drawn back stories.

A significant flaw is that The Cult Play is performed in three acts, with two intermissions and lasts three hours.  Subplots and repetitious details diminish the momentum, though it builds to a satisfying conclusion. Despite the excessive length it’s not dull but does have an overloaded quality.

Plants and flowers hanging from baskets and blocks and chairs are the chief elements of JB Douglas’ spare environmental design on the two-sided runway playing area. The side walls frequently display Attilio Rigotti’s dreamy projection design of stars, windows, and abstract imagery. Mr. Rigotti’s video design mainly consists of the cheeky broadcasts of Pearl and her minions.

The uncluttered terrain is aesthetically utilized by director Irene Lazaridis whose vigorous staging injects visual splendor, ever present liveliness and clarity to the production. Eerie movement and dance numbers are arresting aspects of Madelyn Sher’s choreography. This physical presentation showcases the intense performances. 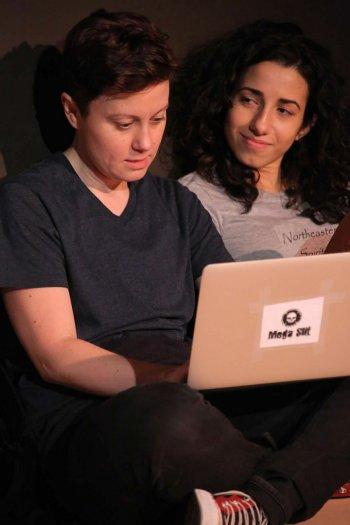 Stacey Raymond and Layan Elwazani in a scene from “The Cult Play” (Photo credit: Gerry Goldstein)

Shifting her moods with precision from genial to tyrannical, the commanding Lori Parquet offers a full-fledged portrait of narcissistic villainy as Mama Pearl.

The wide-eyed and facially expressive Elise Stone winningly mines all of the pathos possible as Nora, a gentle former office manager who has been a cult member for nine and a half years.

With the vivid crustiness of an old-time Hollywood character actor, John Lenartz magnetically plays the wily Papa Jaye. Imprisoned and suffering for much of the play as Charlie Bear is Ariel Estrada who is soulfully heroic.

The charming Stacey Raymond brings a witty sensibility to Mae with her wry delivery and energetic flair. Winsome Layan Elwazani is appealing with her affective sincerity as Clover.

Two young men make strong impressions as cult members. As Garrett, Oscar Klaussner perfectly conveys zealotry and delivers a haunting monologue about his Kansas childhood that’s revealed in a dream about his father.  Josh Moser as the good-natured Diego smoothly captures the character’s idealism with his varying easy going manner. 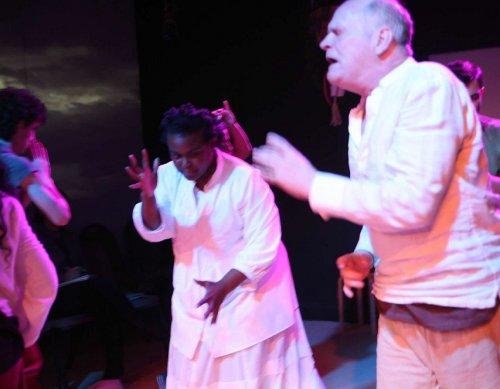 Gleaming white ensembles replicating ecclesiastical wear for the holy leaders and rust- colored jeans and gray T-shirts for the youthful zealots are the highlights of Debbi Hobson’s strategic costume design.

The New York City based Phoenix Theatre Ensemble is known for its often superior presentation of the classics.  This is a product of its Playwright Development Program that nurtures and produces new works.

Part crime drama and part sociology, The Cult Play is a provocative entertainment.