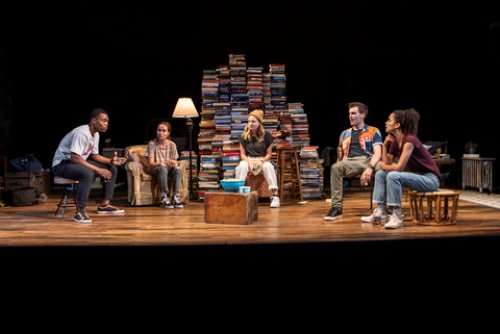 Though extraneous, Sunday’s periodically out of the blue choreographic interludes become a respite from its bad writing and grating performances. For no discernible reason, characters stop speaking and engage in herky-jerky movements accompanied by crashing music and frenetic lighting. “A sort of frenzied dance. Think They Shoot Horses Don’t They? But perhaps slightly less macabre,” is the stage direction’s description.  The action then resumes. These tangents fill things out as the show is scant on plot.

Playwright Jack Thorne’s take on the angst of early 20’s contemporary upper middle-class New Yorkers is an inert hodgepodge lasting a tedious straight through hour and 45 minutes. “Guac” for guacamole, “Did you Uber?” and repeated bellowing of “toxic masculinity” are just a few of the abundant topical references piled on to achieve the patina of being with it.

“What we’ve got here is a failure to communicate,” the catchphrase from 1967’s Cool Hand Luke is uttered and “I Could Have Danced All Night” from My Fair Lady is sung. Either these cultural references are odd anachronisms which stand out coming from young people in the present or they’re some sort of stratagems. These and other such quirks contribute to the play’s artificial tone. 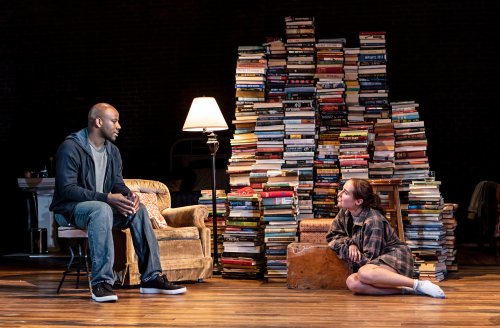 The 40-year-old Mr. Thorne is a distinguished and award-winning British dramatist and screenwriter whose works include Harry Potter and the Cursed Child, the book for the recent stage adaptation of King Kong, and a new theatrical treatment of A Christmas Carol. Setting aside the possibility that Thorne had some searing motivation to write a play that is divergent from his age and background, Sunday comes across as a synthetic vanity exercise to shore up his credentials as a serious playwright with an original effort.

Late in the play, there’s a beautiful Horton Foote-style scene laden with wistfulness where a subsidiary character interacts with one of the prominent figures. This involving sequence is a 20-minute oasis amid the hollowness, giving a hint of Thorne’s talents. Oh, if this were the play. Instead, it’s later followed by the obtrusive narrator’s recitation of everyone’s future fates. Since the characters are so wanly drawn, this makes no emotional impact. We’re just happy that it’s finally over but without any satisfaction.

The Mosquito Coast, Diary of an Ordinary Woman and, of course, The Goldfinch have been previous subjects of this monthly gathering at rotating apartments that’s peopled by a young quintet. Dinner at the Homesick Restaurant is the latest opus under examination. Slight literary discussion, heavy soul-searching and plentiful vodka-fueled sharp banter takes place at the shared New York City apartment of 24-year-old white Marie and her black college friend Jill. They both work at entry level publishing jobs, though Marie has recently been let go from her third such position. Earlier, during a strained phone chat with her dysfunctional mother, she’s imparted her views on Richard Ford.

Other members in attendance at this conclave are the white Milo, the scion of a real estate dynasty who is going out with Jill and his black best friend Keith. Milo’s childhood white gay friend Alice is also the oracular narrator who sometimes sits high atop the action during her discourses and sometimes just thinks out loud. On the periphery is the intense 37-year-old black neighbor Bill who frets about being kept awake by noise from the group and writes unpublished fantastical science fiction novels. Thorne specifies everyone’s races in his character descriptions.

Director Lee Sunday Evans’ polished staging has spatial flair and struggles for momentum due to the patchy material. Mr. Evan’s jagged choreography is reminiscent of the mania of the Peanuts characters’ flailing about.

A huge mound of books dominates scenic designer Brett J. Banakis’ eerie domestic interior. The books at first appear to be symbolic but are referred to. Open-spaced areas depict a bedroom, the kitchen and the living room. A door frame stands alone. A severe brick wall covers the stage’s back wall and it’s where Alice sits on a ledge to deliver a few of her orations. Mr. Banakis’ atmospheric creations add solidity to the production.

From its off-kilter opening to its stale finale, Sunday is an enervating ordeal.