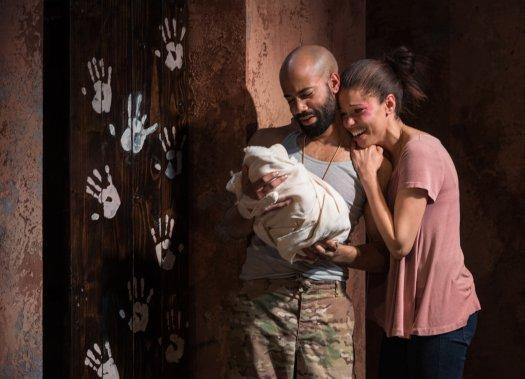 Sean Carvajal and Flor De Liz Perez in a scene from “Seven Spots on the Sun” (Photo credit: Russ Rowland)

Muddled on every crucial level, playwright Martín Zimmerman’s political drama Seven Spots on the Sun takes place in the familiar rural territory of a fictitious and unnamed South American country.

Marauding soldiers, juntas, torture, violence, agitated villagers, miracles, an earthy priest and a saintly doctor are all trotted out.  From these elements Graham Greene could and did weave enthralling novels.  Mr. Zimmerman, however, creates a tedious play.

Weary of the hopelessness of being a miner, the good-natured Luis enlists in his country’s army.  His stalwart wife Mónica is furious but Luis believes that this is their opportunity for a better life.

Moisés is an altruistic doctor.  He is very happily married to the lovely Belén who is a nurse.  They work together in the village’s clinic.  During a raid by hostile soldiers she is taken away for a trumped-up interrogation.  After dying in custody, she returns as a ghost.  The desolate Moisés becomes a recluse.  He is later found to have miraculous powers. 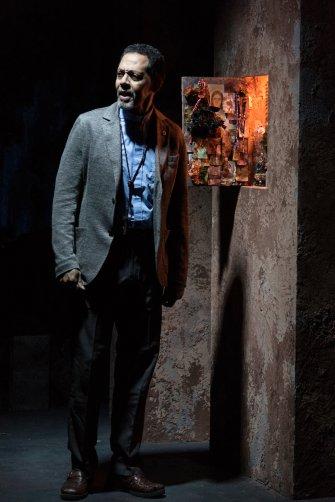 Peter Jay Fernandez in a scene from “Seven Spots on the Sun” (Photo credit: Russ Rowland)

Eugenio is a free-spirited priest who urges Moisés to return to his avocation and help the villagers.  Also involved in the actions are three actors that frequently sing and dance and are collectively known as “The Town.”  They portray a Greek chorus-like device playing a variety of characters that comment on the events and address the audience.

The narrative threads dramatically intersect but nothing is that compelling.  Zimmerman’s stylized dialogue is often in the mode of a poetry slam with colorful and forceful declarations.  The play comes across as an academic exercise rather than a work of true feeling grounded in reality.

Director Weyni Mengesha’s physical staging is proficient since for 80 minutes the actors are competently placed throughout for a fluid presentation.  Unfortunately, Ms. Mengesha has the sound at full blast and that’s distracting.  Just as egregiously, Mengesha has the talented cast performing at full throttle, resulting in overwrought and collectively overall ineffective characterizations.

Rey Lucas as Moisés fares best due to his likable persona.  Flor De Liz Perez as Mónica and Sean Carvajal as Luis are suitably fiery and passionate.  The jovial Peter Jay Fernandez is a fine Eugenio.  Lovely Flora Diaz valiantly struggles with the difficult role of Belén.

Claudia Acosta, Cesar J. Rosado and Socorro Santiago are all appealing as “The Town,” but by the nature of this theatrical device, their parts are mired in superficiality. 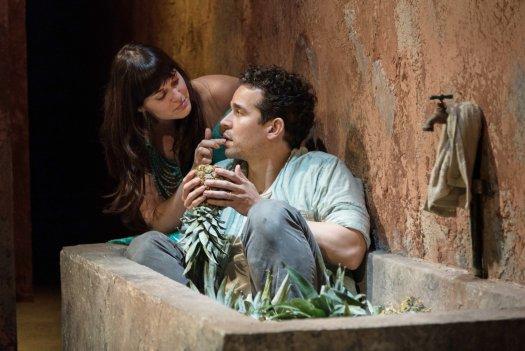 Flora Diaz and Rey Lucas in a scene from “Seven Spots on the Sun” (Photo credit: Russ Rowland)

The indigenous clothing of the characters is finely realized by Fabian Aguilar’s costume design.

The human spirit enduring and surviving the brutalities of oppressive regimes is certainly dramatic material. Seven Spots on the Sun’s treatment of such matters is trite and hollow.