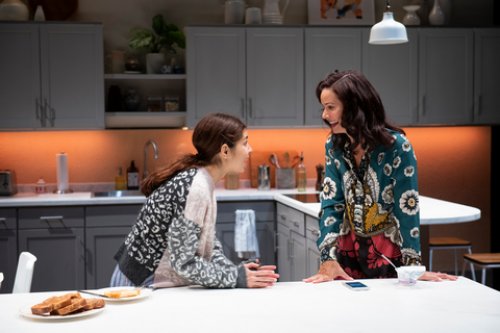 Domenica Feraud and Florencia Lozano in a scene from Feraud’s “Rinse, Repeat” at the The Romulus Linney Courtyard Theatre at The Pershing Square Signature Center (Photo credit: Jenny Anderson)

After grappling with body issues, anorexia and surviving a vaguely noted accidental suicide attempt, the 21-year-old Yale student Rachel has returned to her parents’ Greenwich, Connecticut house following a four-month institutionalization. She is never to be left alone as her regimented eating regimen is supposed to be monitored. A pumpkin pie becomes ominously pivotal as does a concealed and totemic weight scale.

Rachel’s father Peter is a cheery WASP real estate broker who exhausted his trust fund on invitro treatments in order to conceive her. The family’s chief breadwinner is her mother, the sleek, physically conscious and wildly ambitious Joan who is a partner in a major law firm. She was born in Ecuador to hard working parents who immigrated to the United States when she was a child. Joan has Rachel’s future all mapped out for her with Yale Law School impending. Rachel, however, is now pondering a career as a writer of short stories and poems. Brody is Rachel’s conventionally boyish 18-year-old adopted brother who is soon to attend Notre Dame. 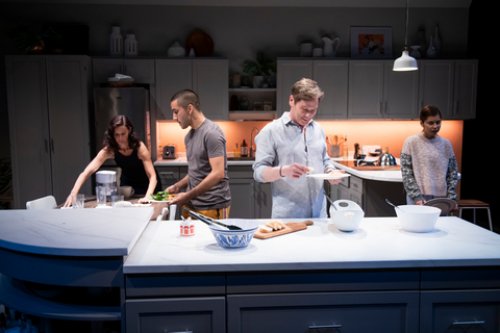 Feraud’s scenario is structured as a series of taut precise scenes bursting with sharp dialogue and topical references including an Uber driver with a musical recording on Spotify. She drops well-timed details that advance her agenda of tackling the issue of the preoccupation with feminine physical perfection. We learn of Peter and Joan’s strained marriage that is characterized by resentfulness over financial inequity and past infidelity. Everything reaches a realistic and dramatically satisfying conclusion.

Most potent are the mother/daughter clashes where Feraud contrasts Rachel’s declared eating disorder with Joan’s matter-of-fact rigorous routine of sparingly eating in order to stay in shape. When does controlled food consumption cross over into mental illness? Adding to the play’s unsettling tone is that Rachel is hauntingly portrayed by Feraud herself with raw intensity and authentic adolescent angst.

Surreptitiously munching on a few crackers and clandestinely chewing on some olives when alone, Florencia Lozano vividly conveys Joan’s gnawing hunger. Previously everyone else was eating bagels and eggs for breakfast while Ms. Lozano was regally sipping coffee. With her flaring eyes, athletic physique and powerful voice that erupts in rage, Lozano’s fierce characterization is a chilling portrait of an unsympathetic mother. It’s up there with Mary Tyler Moore’s Beth Jarrett in Ordinary People. 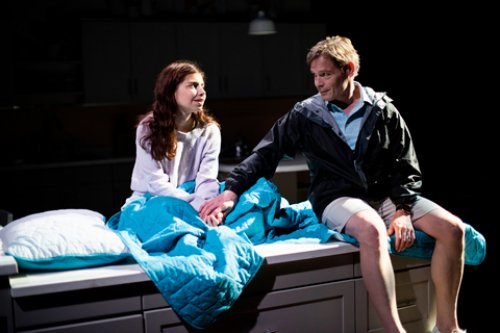 Domenica Feraud and Michael Hayden in a scene from Domenica Feraud’s “Rinse, Repeat” at the The Romulus Linney Courtyard Theatre at The Pershing Square Signature Center (Photo credit: Jenny Anderson)

Michael Hayden as Peter gives a beautifully measured performance depicting affability masking pent-up fury.  Often in gym wear, the youthful Jake Ryan Lozano is visually accurate and quite soulful as Brody.  It would be simplistic to say that the mesmerizing Portia steals all her scenes as Brenda, Rachel’s therapist. Her stillness, soothing manner and spirited deadpan delivery is alternately hilarious and moving. Though commanding, she never throws the play off balance but considerably enriches it.