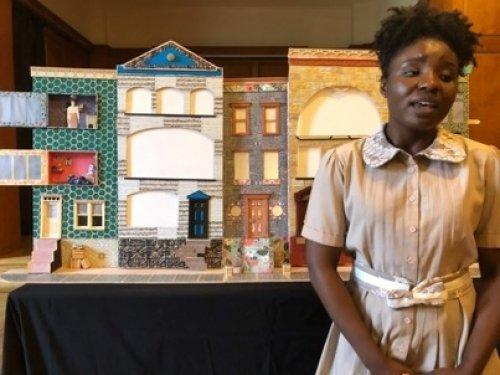 Much of the action of Amina Henry’s Rent Party—staged by Drama of Works at The Tank with Gretchen Van Lente directing—takes place in a puppet theater on an elevated platform placed center stage. This attractive dollhouse-like theater, designed by Van Lente, depicts a cluster of row houses in Harlem in the 1920’s. Finger puppets pop their heads out through windows of the miniature homes at points. At other moments, we see silhouettes on the window shades, depicting what’s going on inside. Sometimes, chess-piece-like puppets are moved about by the actors. The puppet theater can be folded to display larger windows that show the silhouettes of actors’ heads as they speak to one another.

Young-adult actors portray the play’s three main characters, who are all young children: Rose (Maya Posey), her younger brother, Ricky (Christian Roberson), and Jenny (AnJu Hyppolite). A fourth actor, Ashley Winkfield, plays various other characters. The human actors move about in front of and behind the puppet theater and manipulate the various puppets, which were designed by Van Lente and Taylor Harrison. Among them is a relatively large “Jazz Cat” rod puppet. Jazz Cat (voiced by Roberson) serves as a sort of master of ceremonies for the show.

The script concerns the children’s efforts to help throw a rent party in their home in order to successfully pay the landlord. The main conflict lies in their difficulty in booking a live musician—someone who can generate the kind of excitement that can’t be had with a mere gramophone. One candidate for the job has taken a night job and is unavailable. Another is ill. The kids are running out of options, and the situation calls for some quick thinking.

Rent Party is billed as a show for the whole family, but it will be of real interest primarily to preteen children. At that, it seems a rather dull outing. The actors here tend to speak in a sing-song-y manner. Very little humor or visual excitement ensues. Jazz Cat could have been a lively and entertaining figure, but he makes infrequent appearances, often speaking a few bland couplets before retreating to a corner. 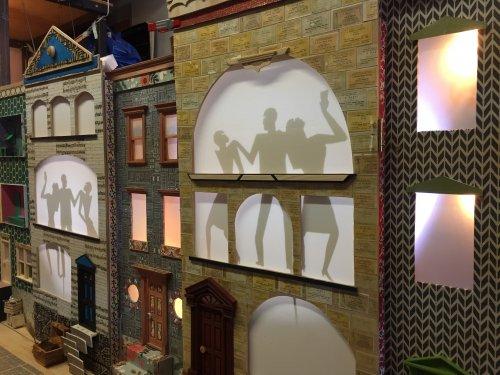 In the promotional materials, Jazz Cat is said to perform “back alley beat poetry.” The 1920’s, of course, saw the flourishing of poetry in upper Manhattan as part of the Harlem Renaissance, “Beat” poetry, however, is associated with the years following World War II. Rent Party, in fact, seems a little fuzzy about a few features of the era being depicted. At one point, the children mention the artistry of Billie Holiday and Ella Fitzgerald. However, while Holiday began performing in 1929, she and Fitzgerald didn’t really become known quantities until the 1930’s.

Harrison created the human actors’ costumes, which seem right for the era. (Ricky, for instance, wears knickerbocker-style trousers.) Jeanette Yew’s lighting design helps make the silhouette effects work nicely. Jessica Lurie’s music direction provides the show with its party ambiance—but when the rent-raising shindig gets underway (with a musician that satisfies the children), the whole affair seems rather sedate. (Of course, it wouldn’t exactly be appropriate at a kids’ show to get too specific about what sort of liquid refreshment is being consumed at the Prohibition-era gathering, but there would likely be some hidden flasks on premises.)

To be fair, the few kids at the performance under review seemed to be attentive and fairly engaged, and the play’s short running time helped prevent restlessness. Still, a bit more peppiness and some bigger patches of humor could have kept both children and adults more engrossed in the proceedings.

Running time: 55 minutes with no intermission