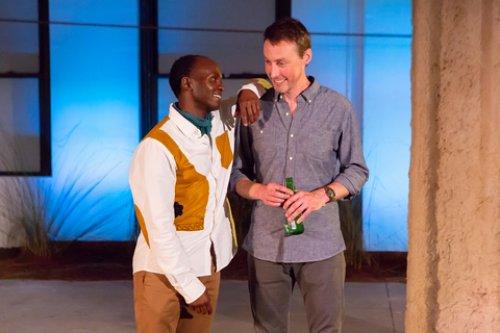 Red Hills is a reworking of Sean Christopher Lewis’ solo memory play Dogs of Rwanda that depicted the 1994 Rwandan genocide. It had its New York City premiere at Urban Stages in March 2018 and it was not a masterpiece but was it more effective than this environmental incarnation that’s presented in an expansive office building space by the En Garde Arts theater company.

The audience arrives to find a gallery setting with Rwandan art on the walls and fashions and indigenous objects on display with descriptive plaques and glasses of wine for sale.

After 15 minutes, a suited young man appears and calls everyone to order and sit in rows of folding chairs.  He presents himself as David Zosia, a human rights activist from The Peace Building Hub, and this reception is to celebrate the organization’s building of their headquarters. He is also the author of the memoir Dogs of Rwanda which chronicles his youthful adventures on a Christian mission in that country.  A power point presentation follows.

A young African man rides by on a bicycle. He is God’s Blessing, a figure from David’s past. Soon he beckons the audience to gather and proclaims himself a tour guide who takes us into another room and gives us a tour of Rwanda. He then has everyone sit on either backless wood benches or on pillows on the floor.  It’s been about 45 minutes since arriving at the theater as the actual play begins. 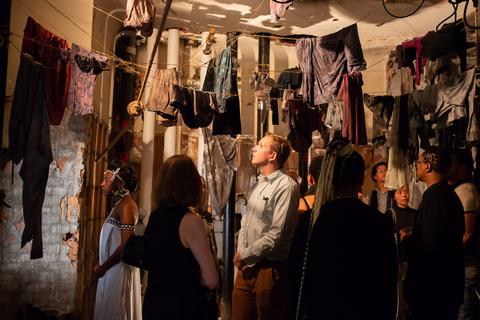 Playwright Asiimwe Deborah Kawe maintains Lewis’ basic plot but alters the conception for two characters instead of one. This still lacks a compelling spine and the earlier presentational additions don’t really add much except tangential length to the experience.

David has returned to Rwanda out of guilt after God’s Blessing has contacted him because he is incensed about what he feels are distortions in David’s book about their friendship and experiences during the military conflicts in 1994. David thought that he was dead. The two contentiously share their differing recollections.

There are descriptions of the horrors of that time that include dead bodies floating in bloody rivers, infants bashed against walls, mounds of skulls and starving dogs shot by soldiers before they can devour corpses. Though horrendous, this dramatic treatment never becomes very compelling. The writing is slack, rudimentary and persistently not very clear. The audience is often directly engaged to react.

Christopher McLinden as David and Patrick J. Ssenjovu as God’s Blessing are both personable but the material inspires their overwrought characterizations to be overwrought. Musician Farai Malianga and vocalist Sifiso Mabena are in the background smoothly providing aural atmosphere. 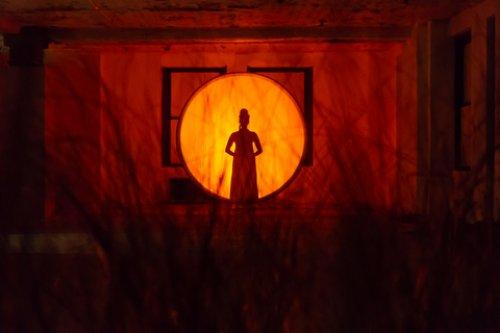 Director Katie Pearl’s kinetic and robust staging has the actors and musical performers strategically and aesthetically placed throughout.  Ms. Pearl makes great use of the spacious landscape that artfully utilizes earth, shrubbery and weathered crates in achieving visual dynamism.

Red Hills nobly seeks to dramatize a notable and tragic historical event but does so inadequately.