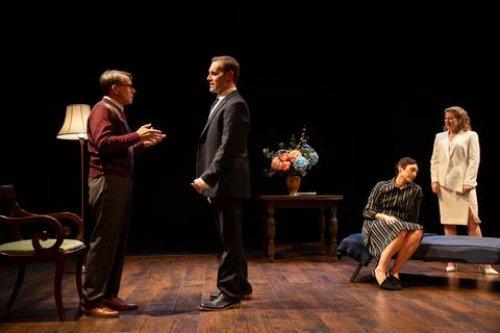 Brazilian-born Rodrigo Nogueira’s Real, directed by Erin Ortman, is one of those stories about a magical connection between people existing in two different eras. Think, for instance, of Michael Cunningham’s novel (and the subsequent film) The Hours.

Dominque (Rebecca Gibel) is a married woman living in New York City in 2019. She was once a musician (the instrument she played is not specified), but she gave it up for a more conventional career. At the top of the play, however, she has begun reading a play, from 1934, that has inspired her to begin playing music again—specifically, a portion of a mysterious fugue. At the same time, she has begun to feel increased masculine energy.

In the next scene we meet composer Dominic (Darwin Del Fabro), the character in the play that Dominique somehow unearthed. He’s a young gay composer and an immigrant from Mexico. As he works on a new composition—a fugue—he finds himself increasingly sensing that he is turning into a woman. But not just any woman. He is somehow becoming the future Dominique. Nogueira uses the analogy of the fugue–as well as that of the moon at the exact point in its cycle when it is both waning and waxing—to illustrate the paranormal relationship that exists between Dominique and Dominic. He shows elements in their two realities that overlap. In both worlds, for instance, there are associations that link the words “flabbergasted” and “gallbladder.” 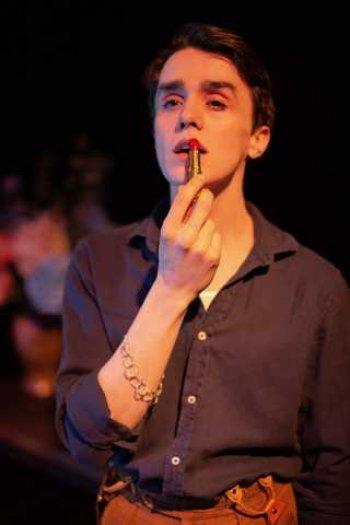 The supernatural scenario is a little like something one might find on an eerie episode of Alfred Hitchcock’s old TV anthology. Unfortunately, it all comes off as fairly stilted and heavy-handed. This is due in part to some of the flowery language that Nogueira uses (“I have the strength of a river to drown my sobbing heart with a loving rage”). But it also has to do with Ortman’s direction, which eschews realism in favor of a highly self-conscious theatricality.

The cocktail party scenes involving Dominique, her husband (Charlie Pollock), her best friend (Gabriela Garcia) and the best friend’s husband (Keith Reddin) are stuffed with long, pregnant-with-meaning pauses, with the characters often glaring melodramatically at one another. It’s a playing style one might find appropriate to a surreal piece by Eugène Ionesco. Whether it’s the right approach for this text is arguable.

A press release for Real suggests that the play will address the little-known Mexican Repatriation measures that were adopted by the U.S. during the Great Depression. The release hints that the playwright will tie such measures to 2019’s anti-immigrant sentiments. But, while the playwright touches briefly on this unfortunate episode of 20th century history, he does not make it the central conflict for Dominic. Certainly, a good solid play dealing with the history of Mexican repatriation would be of interest to audiences right now. But Real is not that play. 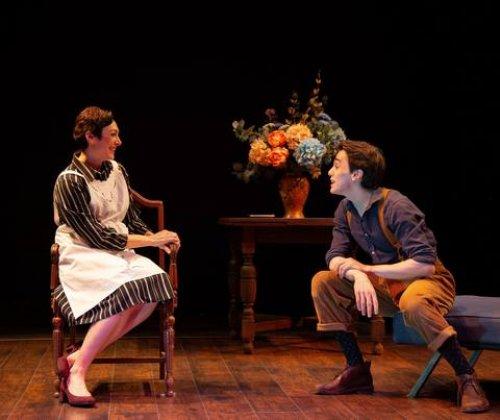 The five cast members deal with the odd playing style required of them with dignity and even a certain zest. Del Fabro, a Brazilian actor now in New York, makes the greatest impression. He captures the conflicting emotions that Dominic feels as his consciousness becomes increasingly entangled with Dominique’s. Garcia, Pollock and Reddin all do double duty: playing characters in both strands of the story.

Scenic elements here are simple and unobtrusive. Ao Li’s black-draped set functions as a commodious space for both eras’ action to play out. In scenes late in the play, Kia Rodgers’ lighting design helps illustrate the absorption of Dominic and Dominique into one another. And Becky Bodurtha’s costumes provide clues about who Nogueira’s characters are. Especially apt is the seedy-looking, ankle-exposing outfit for Dominic, which emphasizes his outsider status—as immigrant, sexual nonconformist and struggling artist. Sound designer Quentin Chiappetta has composed the music of the fugue that’s so essential to the story.

Real is a play whose earnestness and floridity will likely appeal to young and/or thoroughly non-jaded playgoers. For the more disenchanted rest of us, it may present a considerable challenge.