Claire Kiechel’s Paul Swan Is Dead and Gone (directed by Steve Cosson) gives audiences a glimpse of the last stand of the author’s great grand-uncle, a dancer-actor-painter-sculptor who was once proclaimed “The Most Beautiful Man in the World.” Tony Torn gives a brave and memorable turn as Swan (1883-1972) in an immersive-ish production at Torn Page, a studio, salon and classroom in what was once the Manhattan home of Torn’s celebrated actor parents, Rip Torn and Geraldine Page.

Torn Page is an intimate space. It serves well as a stand-in for Studio 90 at Carnegie Hall, where Swan gave weekly recitals for 30 years, from 1939 to 1969. Mind you, Swan was already approaching age 60 when he began these programs. Somewhere along the line, he became known as a camp figure—unsurprising when you consider that he entered his golden years tripping about like a winsome faun while dressed in skimpy tunics suggesting ancient Egypt and Greece.

“You see, every Saturday night I do my soiree,” Kiechel’s Swan tells us. “It is the only day I live. Monday through Friday I prepare for living.”

In his early days, Swan did a lot of living. A restless Nebraska farm boy, he fled to Chicago and then on to New York. He went around the block a time or two in Europe as well. He was even in the movies (silents, that is), appearing in Cecil B. DeMille’s Ten Commandments in 1923 and in 1925’s Ben-Hur—which may partly explain his affinity for antique costumery. His cinematic career ended with some Andy Warhol films in the 1960’s, including one called Camp. Though the love of his life was a man—a doomed Briton named Fred Bates—Swan was a family man of sorts: the father of two daughters.

Kiechel’s play depicts a fairly surreal recital evening, very late in Swan’s career. The star apparently knows well the value of keeping an audience waiting, delaying his entrance while his pianist Bellamy (Robert M. Johanson) vamps: joking and kibitzing with the audience. Swan’s daughters, Flora (Helen Cespedes) and Paula (Alexis Scott) provide their own feisty warm-up act. When Swan finally appears, it’s a grand entrance indeed. Torn emerges from a standing coffin that pretends to be a sarcophagus. Drenched with heavy makeup, he steps out of the box looking a little like Norma Desmond blown in on a fog-machine cloud.

The first half of the show is silly and wild, and Swan is a figure of fun and—sometimes, it seems—ridicule. When he dances, he resembles a rambunctious crossing guard. He holds forth about past glories. He quarrels with Bellamy, who is soon replaced by Swan’s previous piano man, a pretty-much identical gent named Bollany. Flora and Paula perform a very funny routine in which they impersonate—respectively—critic Susan Sontag and novelist James Purdy. In these guises, they argue about creativity and criticism and camp. In real life, Sontag found fame in part for her early essay “Notes on Camp,” while Purdy wrote a novel called Elijah Thrush with a protagonist based loosely on Paul Swan. Neither comes off unscathed in this savage parody.

After Swan becomes exasperated with and drives away Bollany (who, like Bellamy, seems to be the star’s sometime lover), the whole mood of the play changes. A storm gathers outside, and Swan turns contemplative, recalling days as a queer child as well as the years of the First World War, when he loved and lost Fred Bates. The concluding portion of the play is sad and beautiful. Magically, the vainglorious, delusional Swan attains a stature that could almost be called heroic. 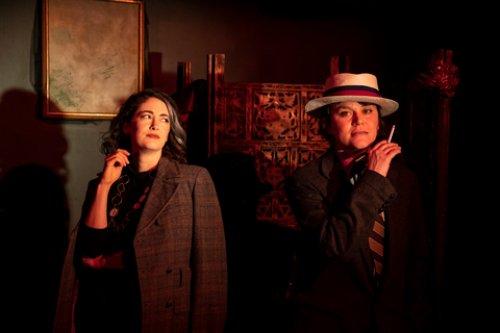 Director Cosson and choreographer Dan Safer are in part responsible for the success of this production’s seamless mood transitions. The show’s technical elements are also quite fine. An-Lin Dauber’s costumes are colorful and bold. Andomache Chalfant’s scenic design—which crams the space with paintings and busts and decay—feels just right. Especially helpful is the work of lighting designer Lucrecia Briceño and sound designer Avi A. Amon, who together make that thunderstorm both theatrical and real. Amon, along with actor Johanson, also wrote original music for the production—much of it with a slightly folky/rocky sound that seems out of character for the Swan salon but perfectly right for the era in which our protagonist approaches his final exit.

Johanson, Cespedes, and Scott all have some fine moments in the show. However, this is really Tony Torn’s triumph. His recent turn as a Trump-like figure in Jean-Claude Van Italie’s The Fat Lady Sings (at La Mama) was impressive, but here he pulls out all the stops. He takes Paul Swan beyond the realms of camp and pathos. He endows him with a self-awareness that, if it ever before existed, has long been buried under decades’ worth of caked-on makeup and pretentiousness.