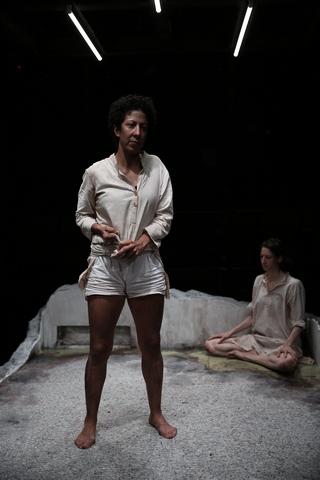 Sarah Nina Hayon and Renata Friedman in a scene from Winter Miller’s “No One is Forgotten” at Rattlestick Playwrights Theater (Photo credit: Paula Court)

“Oh! It’s over,” one might possibly think 80 minutes into the female two- character political prison drama No One Is Forgotten. The numerous short scenes have been punctuated by crashing blackouts and flickering fluorescent lighting adeptly provided by lighting designer Stacey DeRosier.

The lights now come up on the stage without the two actresses. This would have made a plausible ending considering the piece’s opaqueness. We sit there for a while, the lights go down and go back up and the actresses have returned. There are a few more inconclusive scenes and the actresses are standing around and we eventually comprehend that it really is over. It’s all symptomatic of the play’s maddening vagueness.

Trouble ahead is signified as the audience is let into the theater that’s configured into a four-sided playing area and for 10 minutes we observe the performers laying around and silently in motion while wearing costume designer Rhys Roffey’s flowing white combination of night gowns and work shirts that we later interpret are prison uniforms. This visual tangent is accompanied by Tyler Kieffer’s proficient sound design of irrelevant highway and later nautical bits. This wan gimmick is puzzling as the program offers no clues as to where they are. It’s typical of the unsatisfying smug theatricality on display.

Only in the last portions do we learn the character’s names and get minimal biographical data. Prior, it’s been a long stretch of mannered yammering striving for profundity. Someone Who’ll Watch Over Me and Kiss of the Spiderwoman are notable theatrical works presenting artful takes on imprisoned characters. No One Is Forgotten is sunk by grating abstractness. The lack of specifics and expositional detail renders it as pointless.

Playwright Winter Miller offers a shakily hollow mélange of Genet, Beckett and Pinter with her two women in a prison cell scenario taking place in an unnamed foreign country. Ms. Miller’s dialogue is well-shaped and achieves sporadic humor and emotional resonance but to no real purpose as her effort comes across as an artificial exercise rather than a realized play. Without explanation sometimes only one character appears, and we’re left to conclude, “Maybe it’s a flashback or one was taken away and returned. Did one of them die?” 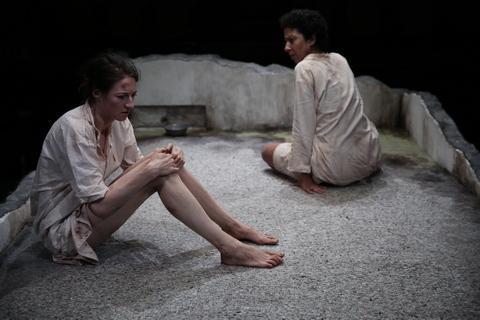 Renata Friedman and Sarah Nina Hayon in a scene from Winter Miller’s “No One is Forgotten” at Rattlestick Playwrights Theater (Photo credit: Paula Court)

To pass the time of their unexplained incarceration, the characters spout non sequitur observations, play word games, rhapsodize about favorite foods as they’re only provided with nutrient drinks and a sort of gruel, and they engage in philosophical challenges. “Concentration camp or a gulag,” “Colorectal cancer or leukemia” and “AIDS or Ebola” are among the topics jocularly debated. Doing push-ups, sit-ups, squatting to urinate into a barrel, and dance moves are also part of the inconsequential filler activities. Rocio Mendez’s accomplished fight and intimacy choreography enhances a slap and the one and half stylized lesbian sex sequences.

Ms. Miller has created two grand if hackneyed roles and this type of faulty material is the sort that’s elevated by star casting. “The play isn’t much, but Meryl Streep and Jane Fonda are awesome, making it an event!” Instead we get the charming duo of Renata Friedman and Sarah Nina Hayon who deliver solidly impeccable performances. They’re each listed in the program as “Actor,” with no character name. Oy.

No One Is Forgotten has moments of engaging clarity but these don’t add up to much.