Lithuanian director Rimas Tuminas has led the Vakhtangov State Academic Theatre of Russia in a massacre of Mikhail Lermontov’s 1845 play Masquerade.  Presented by the Cherry Orchard Festival, the spectacle on stage at the New York City Center made a mockery of an intelligent verse play that beautifully reveals the passions underneath the elegant façade of early 19th century Russian high society.

Lermontov’s plot has many similarities to Shakespeare’s Othello, including the loss of a keepsake, here a bracelet that inevitably leads to jealousy.  In Masquerade, the extraordinary pressures of a strictly stratified society, where a wink or a nod can have catastrophic results, places a stultifying weight on the characters until violence is unavoidable.

Turminas has decided to set the play in a surreal dreamscape that looks like a wintery gravesite besieged by constant snow. Designed by Adomas Yatsovskis, this dreary setting gives the play a Waiting for Godot ambiance, complete with a stage full of clueless, self-indulgent characters who speak their lines in exaggerated ways that revealed none of the phrases’ meanings.  (Plodding, pedestrian supertitles didn’t help, keeping the playwright’s poetry totally unexpressed.) 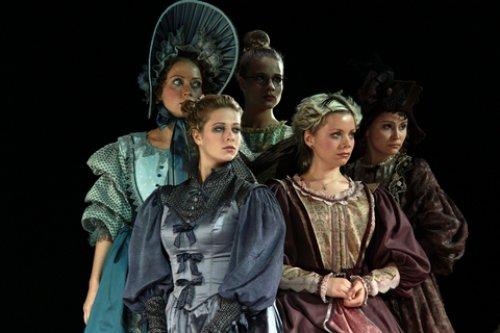 But the major insult to Lermontov’s masterpiece is the absence of the title event, the masquerade ball from which the entire plot flows. It’s the setting in which Prince Zvezdich (a boyishly un-princely, mis-costumed Leonid Bichevin), mischievously flirts with a masked woman who turns out to be a friend’s wife.  During a card game at the ball the Prince loses huge sums of money.  Both events are central to the dire path the plot takes.

All that is revealed in Tuminas’ shorthand version is that somewhere offstage the Prince loses money and tries to get the lone Jewish figure Shrikh Adam Petrovich (Mikhail Vaskov in a clownish performance) to lend him some.

Arbenin Evgeny Aleksandrovich (Evgeny Knyazev, acting like a wounded lion) is the Othello figure.  His wife Nina is played like a flibbertigibbet (Maria Volkova who floats about the stage and poses a great deal).  Evgeny is at first sympathetic to the Prince and helps him out until he finds out that the Prince is the man who has his wife’s bracelet. 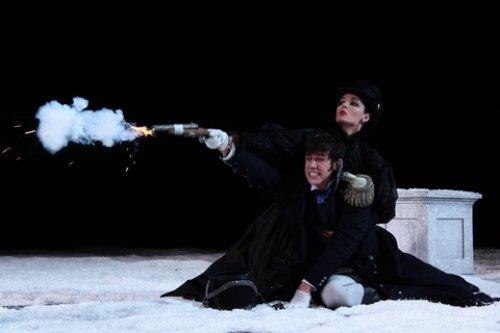 The best character and the best acting of the evening came from Lidia Velezheva as the sexy, energetic Baroness Shtral who commanded attention whenever she appeared.

The saddest thing about this production is that it was boring.  Long passages of shtick, over-stylized acting, repetitive movements of the ensemble, over-use of the famous Aram Khachaturian “Waltz” (written for a 1941 production of the play) and the heavy handed repeated metaphor of a constantly inflating snowball being rolled laboriously across the stage by the actor Oleg Lopuhov (who seriously overacts) made the play a drudgery to watch.

The costumes (Maxim Obrezkov) were extravagant while the lighting (Maya Shavdatuashvili) extraordinary.