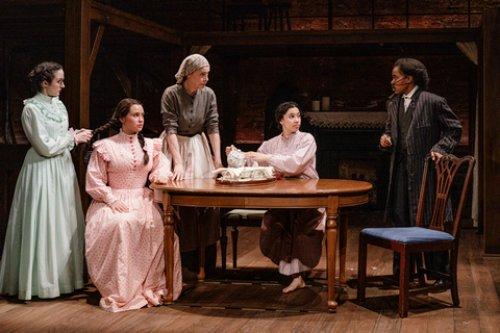 Kate Hamill as Meg, Carmen Zilles as Amy, Ellen Harvey as Hannah, Paola Sanchez Abreu as Beth and Kristolyn Lloyd as Jo in a scene from Hamill’s adaptation of Louisa May Alcott’s “Little Women” at the Cherry Lane Theatre (Photo credit: James Leynse)

Adapting beloved classics for the stage can be a tricky business as people come with expectations. One choice can be to modernize and update the story to the present as the current Much Ado About Nothing at the Delacorte Theater in Central Park. Another way is to recast it as the musical Tootsie which changes the television soap opera to a Broadway musical.

Kate Hamill who has had success with Sense and Sensibility (Bedlam), Pride and Prejudice (Primary Stages), and Vanity Fair (The Pearl Theatre) has now turned her sights to Louisa May Alcott’s beloved novel of growing up, Little Women. With this stage adaptation she seems to want to have it both ways: although still set during the Civil War with the women in long dresses and singing “The Battle Hymn of the Republic,” Jo wears men’s clothing and she and Laurie often speak of feeling like they do not fit their gender role. A note in the script states that the play “MUST be cast in an inclusive fashion. It is an American play, and should reflect America today.” As a result, the Primary Stages production makes the March family sisters Hispanic, African American, and Caucasian. This new Little Women has a modern sensibility at war with the material.

There are many other minor changes which are both unnecessary and confusing for anyone who knows the novel. John Brooke, named after the Brooke Farm experiment, has been renamed Brooks. Laurie’s late mother (rather than his father) is referred to as Mr. Laurence’s child which does not explain why Laurie has his grandfather’s last name. Mr. March’s role in the war is explained as a soldier rather than as the chaplain that he is in the book. The family that Meg works for as governess has been changed from the Kings to the Mingotts of Manhattan, a name taken from Edith Wharton’s The Age of Innocence. 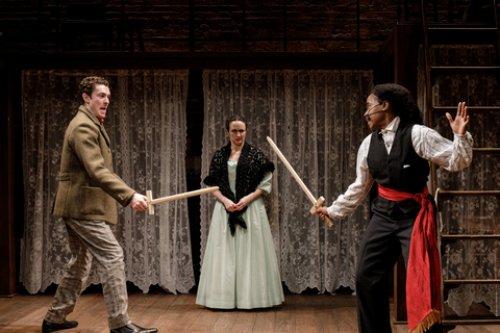 Nate Mann as Laurie, Kate Hamill as Meg, and Kristolyn Lloyd as Jo in a scene from Hamill’s adaptation of Louisa May Alcott’s “Little Women” at the Cherry Lane Theatre (Photo credit: James Leynse)

Hamill’s adaptation is faithful to the book in its first act and then goes off and does its own thing in the second half. Taking place during the early Civil War, the setting is never mentioned but was assumed in the novel to be Concord where the Alcott family lived. It begins at Christmas time 1861 as sisters tomboy Jo, maternal Meg,  vain Amy and shy Beth growing up in genteel poverty in a warm and loving household while their father is away in the war bemoan their inability to have presents, but decide to spend their little savings on their mother whom they call Marmie. They meet the sensitive, artistic boy next door, Theodore “Laurie” Lawrence, recently orphaned who has moved in with his elderly, wealthy grandfather.

It is not until Beth plays the piano for his grandfather that he is allowed to join in their games where he takes a shine to Jo who also feels awkward in her social role. Meg meets his tutor Mr. Brooks at a dance at her employer’s house and they have an awkward encounter but he too is smitten. Wishing to become a writer, Jo is helped by Laurie (who pretends to be her agent) to get a short story published in a newspaper. Tribulations come in the form of their father’s illness in Washington, D.C. Leaving the girls in the hands of Hannah, their housekeeper, their mother escorted by Mr. Brooks leave to tend him in the D.C. hospital. Playing Good Samaritan to an indigent family of German immigrants, Beth contracts scarlet fever and becomes very ill. Just as Beth is at her lowest point, Marmie and their father return with Mr. Brooks and Laurie as escorts.

The abrupt and streamlined second act marries off Meg, deals with Laurie’s proposal to Jo, sends Amy off to Europe, and brings Beth her last illness. Jo finally sits down to write her book about a family just like her own. The character of Professor Bhaer, Jo’s mentor in the novel, never puts in an appearance which leaves Jo without a love interest. Director Sarna Lapine has not been faithful to the novel in the characterizations. Kristolyn Lloyd as Jo is a feisty contemporary woman, not the girl fighting against 19th century conventions. As Meg, author Hamill is quite sentimental without being the older sister with the conventional wisdom, but one who breaks into tears at the drop of a hat. Carmen Zilles as the beautiful but egotistical Amy is given unattractive hair styles by Dave Bova that undermine her role. As the agoraphobic Beth, Paola Sanchez Abreu seems much older than her sisters even though she is supposed to be the third child. 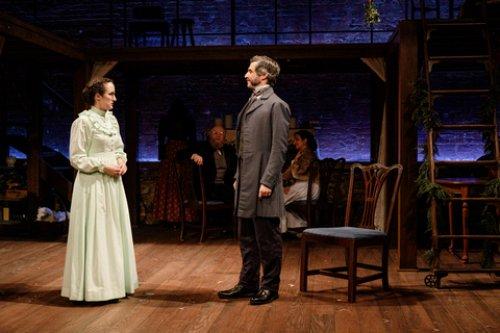 Kate Hamill as Meg and Michael Crane as Mr. Brooks in a scene from Hamill’s adaptation of Louisa May Alcott’s “Little Women” at the Cherry Lane Theatre (Photo credit: James Leynse)

Replacing Maria Elena Ramirez who has withdrawn from the cast as Marmie, Mary Bacon (on book at the performance under review) seems both low key and subdued. As Laurie, Nate Mann does not seem to age at all from being tutored at home to becoming a college man. Michael Crane as his stuffy tutor Mr. Brooks is more awkward than he needs to be and with a very pronounced limp, hardly mentioned in the novel. Doubling as both Mr. Laurence and the girls’ silent father Mr. March, John Lenartz gets very little stage time though he is effective as the gruff but kindhearted grandfather and patron. Best is Ellen Harvey as the feisty Irish housekeeper Hannah who is both direct and blunt. She is also amusing as the social-climbing Mrs. Mingott, who is Meg’s employer.

Valérie Thérèse Bart does the production no service by having the characters in the same costumes throughout (except for Laurie’s longer jacket when he returns from college) although several years go by and many changes occur. The set by Mikiko Suzuki MacAdams is serviceable but not very atmospheric. The same can be said about the lighting by Paul Whitaker which does not suggest 19th century gaslight or fireplaces. Bova’s wig and hair design makes all of the women look very severe.

Sarna Lapine’s production of Kate Hamill’s adaptation of the Alcott novel is entertaining and engrossing though the modern sensibility is likely to bother devotees of the novel. The amiable and energetic cast keeps the story moving swiftly along. However, there is little sense of period which might disturb some: is it likely Jo would wear men’s clothing in 1861 New England, away from the Bohemian centers that someone like novelist George Sand frequented? And all the talk of “gender roles” seems excessively 21st century.

Running time: two hours and five minutes with one intermission