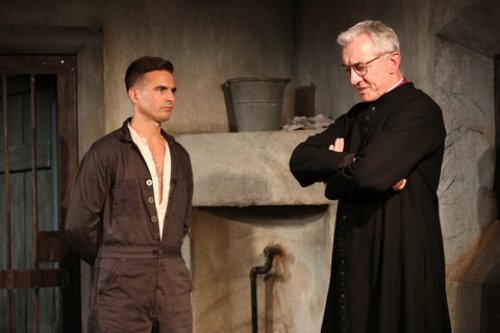 Though short on plot and with not much of a payoff, Irish playwright Robin Glendinning’s thoughtful two-character noble historical exploration still engages. Mr. Glendinning combines a poetic grasp of dramatic writing with industrious historical research to craft his informative and frequently witty scenario. The play’s title is also that of a Gerard Manley Hopkins poem and its first line.

I am Irish and like being liked… I was always liked. Being liked is the fatal disease of me race and it’s a terrible gunk to us when we find out that not everyone does…

It’s 1948 and we’re in an Italian prison where “The Beast of Rome,” German SS Colonel Herbert Kappler (1907-1978) is serving a life sentence for war crimes. Kappler was the Chief of Police of occupied Rome and was responsible for the deportation of Jews to concentration camps as well as ordering massacres of civilians. He is visited by his nemesis Monsignor Hugh O’Flaherty (1898-1963). “The Scarlet Pimpernel of the Vatican” was the nickname of this Irish prelate who as a Italian resistance figure saved the lives of over 6000 Allied soldiers and Jews during W.W. II. In real life, O’Flaherty did visit Kappler out of a quest of instigating redemption in the Nazi, and a complex friendship evolved. 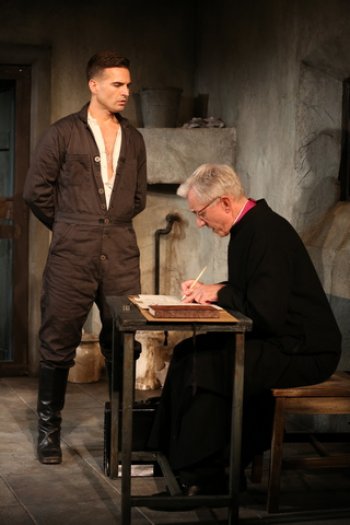 In my dreams the hellish stink of the rotting corpses creeps into my nostrils just as it seeped through the cracks in the dynamited caves and I hear again the monstrous buzzing of millions of flies.

With his military haircut, intense facial features and employing a slight yet distinct German accent, the lithe and youthful Haskell King offers a roaring turn as Kappler. Whether engaging in athletic exercises, delivering explosive tirades or emitting melancholy, Mr. King magnetic forcefulness is ever present.

Breeziness, a delightful brogue and a zesty presence are the key features of Sean Gormley’s marvelous portrayal of O’Flaherty. Mr. Gormley’s mature beaming countenance and comic timing are crossed with steady seriousness, achieving a grand characterization. Gormley and King’s electric rapport transcends the play’s inherent talkiness, taking it to a satisfying conclusion. 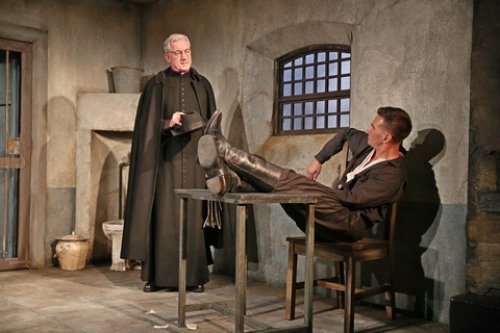 Working on a quite confined playing area, scenic designer Edward Morris has created an arresting gray landscape, depicting the prison cell with vivid drabness. Capped by a claustrophobic ceiling adorned with vintage lightbulbs, on display are a barred door and window, a weathered bed, a battered desk and a grimy toilet. That last item is gratuitously showcased. At one point while still speaking, Kappler walks over to it, undoes his pants and sits on it, continuing in conversation while tastefully simulating defecation.

Other than this brief questionable sequence, which is not in the stage directions, director Kent Paul’s physical staging is a model of resourceful efficiency. There’s an organic variance of sitting, standing and pacing by the two actors. Their superior performances are matched by Mr. Kent’s knack for visual polish that yields to a pleasing presentation.

Brightness shining through murkiness is the hallmark of lighting designer Matthew McCarthy’s suitable hues conveying the piece’s sense of the past, documentary tone and sober mood. Bellowing guards, rioting crowds and incidental effects are rendered by Rob Rees’ bracing sound design. A dark jump suit for Kappler and traditional black clerical wear for O’Flaherty are the elements of Linda Fisher’s intrinsic costume design.

Glendinning is an 81-year-old Belfast native and a distinguished author for the stage, radio and of short stories in the United Kingdom. Presented by New York City’s esteemed Irish Repertory Theatre, this world premiere of Kingfishers Catch Fire affirms his talents while introducing these to the United States.

Running time: one hour 45 minutes including one intermission