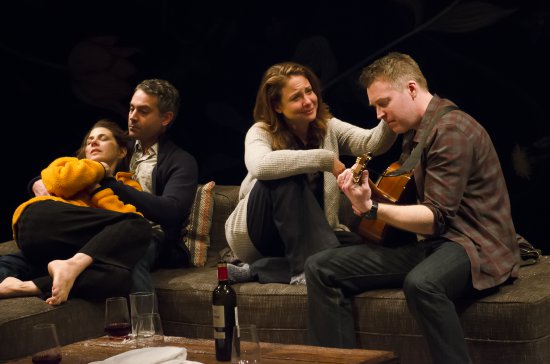 The carcass of a skinned creature hanging over a well-appointed living room–with Persian rugs, a hassock or two, plus a sofa and a coffee table–is a striking image to take in, before Sarah Ruhl’s newest play, How to Transcend a Happy Marriage, even begins. The carcass is removed by a figure who we later learn is Pip, a young woman who “slaughters her own meat” for ethical reasons and lives with two men in a “polyamorous relationship.” Pip is also a new “temp” at an office where Jane works. When in the opening scene, Jane tells her husband Michael, as well as their friends, George (short for “Georgia”) and Paul, about Pip, they are all intrigued and decide they want to meet this carnivorous wonder.

They’ll have Pip and “the gentlemen” over for dinner one night; but coming up with an available date proves difficult: Paul, an architect, has a talk on “post-colonial Dutch architecture” one proposed night, and his daughter’s “nutcracker recital” on another–not to mention his son’s “first violin recital” on yet another. (Ruhl wastes no time in establishing the cultural credentials of her two, middle-aged, married couples.) The first night that seems feasible for the four of them is New Year’s Eve. Welcome to Scene Two of Ruhl’s play, when Pip shows up with David (pronounced “Da-veed”) and Freddie, her two live-in partners, for dinner and for what becomes the play’s longest and most pivotal scene including a sex orgy involving the seven of them. 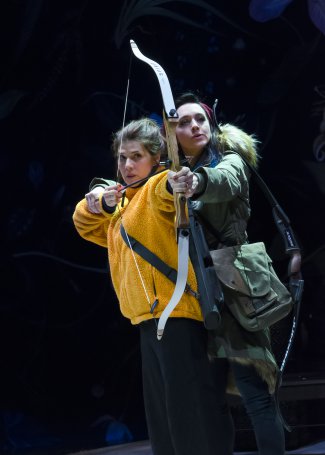 Marisa Tomei and Lena Hall in a scene from Sarah Ruhl’s “How to Transcend a Happy Marriage” (Photo credit: Kyle Froman)

In Act II, however, we’re made to question just exactly what it was that we saw, or didn’t see, as the case may be. The fact that Pip and her partners showed up with hash brownies which they all consume gives Ruhl a lot of leeway for stretching her story into some uncharted and unknowable territory. Was George, perhaps, hallucinating some of what occurred, and what we believed to be the case? There is also at least one development, in the second act, which is either supernatural and metaphysical or outrageous, depending on your point of view.

While How to Transcend a Happy Marriage emerges as one of the most thought-provoking plays of the year, as well as one of Ruhl’s best, the built-in irony of the title takes on a special meaning when we learn, in the end, that it really is about transcendence, through “harmony.” In fact, How to Transcend… may feel overly contrived, since David is a mathematician, who specializes in Pythagorian geometry and triangles, and Michael is a musician, who tells us about “triads” and also that “three is the number of harmony.” Ruhl’s play begins, more or less, with the three-way relationship between Pip and her compatriots, and it ends with George’s finding “harmony,” in at least three different ways. Add to this that each of the four main characters has “three best friends,” and Ruhl–who is perhaps best known for In the Next Room or the Vibrator Play–is providing a recipe for a harmonious play. 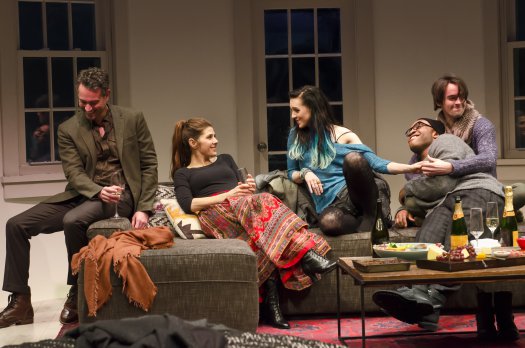 Marisa Tomei excels as George, the narrator of How to Transcend…–and of her own story. Thanks to Tomei’s vocal and visual expressions, we constantly share in George’s ongoing surprise, as she graduates from naivety to knowledge. In the end, it is George who has the most “transcendent,” and religious, experience. (It is not insignificant that we’re told George is the only Catholic in the group.) “It seems like you have omniscience,” says George, in her closing monologue, “when you can talk to the audience in a play.” And talk to us, she does, in the playwright’s smart, yet snappy language. Consider George also telling us that Jenna, “over time forgave us,” after walking in on her parent’s participating in a sex orgy. And “the trauma of seeing her parents’ aberrant sex lives up close–it became an anecdote in a college application.” Or consider David’s saying: “I’m from everywhere. And nowhere. I moved constantly as a child…. as a result, I don’t really believe in nationality.”

With her black lipstick and aqua-tinged, long hair, Lena Hall presents an extremely out-there Pip, who really is a “pip” of a character, no less than “a beautiful woman in her late twenties, named Deborah.” (Pip also, “according to the American legal system,” goes by the name of Diana, which is, of course, the name in Roman mythology of the goddess of the hunt.) Omar Metwally offers a sturdy Paul, Brian Hutchison a reliable Michael, and Robin Weigert is fine as Jane. David McElwee is an appropriately bohemian David, in Susan Hilferty’s appropriately loose-fitting coats and big boots, and David McElwee is the somewhat effete Freddie.