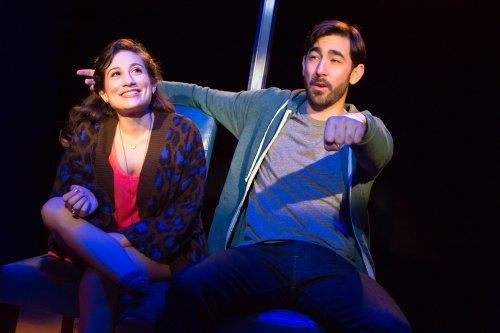 Can a 28-year-old, male, bisexual, Jewish stand-up comedian find love and happiness with a 28-year-old neurotic female stand-up comedian after they hook up in Los Angeles?  That’s the premise that playwrights Dan Rothenberg and Colleen Crabtree explore in their wonderfully performed, smartly mounted, and minor, though enjoyable romantic comedy, Hot Mess.

Mr. Rothenberg and Ms. Crabtree are a married couple and their autobiographical, 2007 play Regretrosexual: The Love Story ran for two years in Los Angeles.  Hot Mess is their engaging reconfiguration of it.  The often playfully crude dialogue is snappy and the appealing characters are well drawn.  There are many classic set-up and punch line bits a number of which land with amusing results. Lasting an hour, it’s a mildly satisfying short play that makes for simple entertainment.  It does provide two strong roles and the production’s chief virtue is the delightful actors playing them.

Athletic, wiry, bearded and bespectacled, the youthful and instantly likeable Max Crumm exudes sensitivity as Max. The structure is that of a memory play and Mr. Crumm often addresses the audience as he effortlessly tosses off joke after joke with comic flair.  Crumm performs a stand-up routine at a Laundromat’s comedy night about his character’s bisexuality that is simultaneously hilarious and dramatic.

Scrunching up her face, growling like Linda Blair in The Exorcist and with her eyes blazing, Lucy DeVito is hysterical as Elanor, as she has one of her mental “crashes.”  The captivating Ms. DeVito offers an animated portrait of the familiar role of an offbeat young woman coping with life’s challenges. 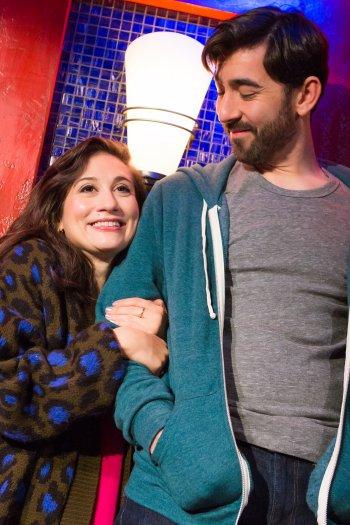 Crumm and DeVito have a marvelous chemistry together and terrific mutual comic timing that make them seem like a real couple. Their compelling performances energize and elevate what could have been a wan, sitcom-style stage show.

As Louis, Max’s unkempt, washed up stand-up comic neighbor, the charmingly boorish Paul Molnar delivers a wicked whirlwind of wisecracks, tart observations and amiable support.  Mr. Molnar also appears to great effect as a stereotypically gay, former companion from Max’s San Francisco days, as well as a silently histrionic waiter.  Molnar wonderfully makes the most of his appearances with his flamboyant characterizations.

From the opening sight gag of the couple’s post-coital conversation in an upright, vertical bed that’s center stage, to the celebratory finale, director Jonathan Silverstein’s staging is a model of brisk and inspired efficiency.  Characters periodically enter and exit through the audience adding to speed and interest.

Scenic designer Tobin Ost’s inventive creations benefit the production immensely. The rectangular playing area is set with small, round tables with candles and chairs, simulating a restaurant.  The mirrored back wall is actually panels that swing open for entrances and exits and for props. Numerous locales are seamlessly and rapidly rendered without the cumbersome intervention of stagehands. 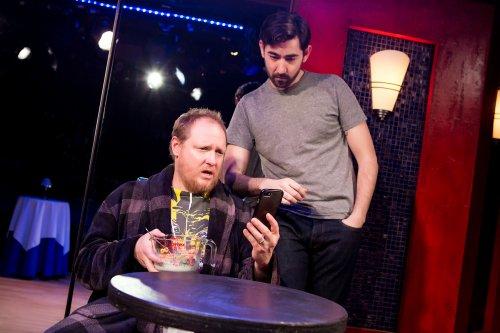 Lighting designer Matthew Richards and sound designer Bart Fasbender both vigorously convey the differing locations and span of 14 years with their adept efforts.

Hot Mess is definitely thin material but it contains enough laughs and thoughtfulness to put it over as a pleasant diversion.