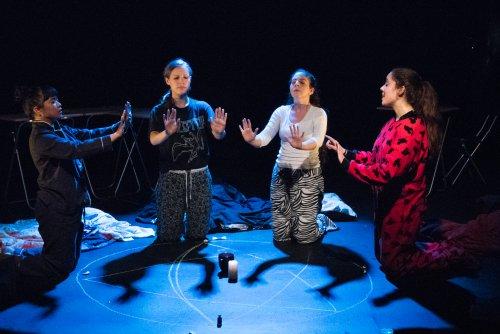 An uneasy and unsatisfying blend of humor and topical drama, High School Coven follows the travails of four 16-year-old girls who are witches. It’s a stale rehash of scholastic antics, and the supernatural angle doesn’t add much. Amidst these inane trappings, a rape subplot feels like a tacked on contrivance, making the play further irredeemable.

Structured as a 90-minute, multitude of synthetic, short scenes and revelatory monologues, playwright Kaela Mei-Shing Garvin’s scenario might well have made for a quirky film or television series. As a stage play it’s ponderous.

Set in a California, Bay Area high school, there we meet the four students who prattle on in contemporary lingo. Gradually, and without any explanation we learn that they are witches. An episode of Bewitched has more background information. After 30 minutes, a semblance of a plot emerges, a run for class office. Eventually it is revealed that the candidate running was raped over the previous summer at an off campus party where alcohol was consumed by her male opponent. This past event becomes the play’s main focus.

Ms. Garvin seemingly wants to tackle serious social issues but her overloaded approach doesn’t cohere. The witchcraft lore is confounding and is perhaps an attempt at allegory.

Feminism, the syllabus of the male centric American Literature class, intractable bureaucracy, and the pressures of adolescence are flippantly explored. Sleepovers are used for casting spells. The girls visit a pet shop and debate what animal would make the best familiar. Of course, there’s a sojourn to a shopping mall, where there’s an extended sequence at a clothing store of trying on dresses. 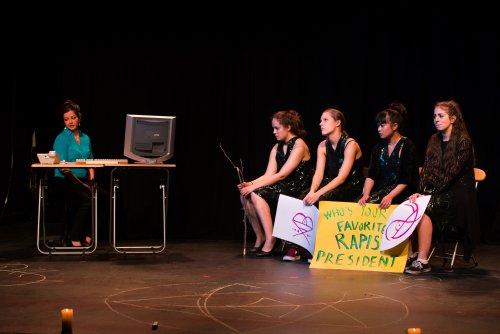 The dialogue is laced with abundant profanity and plenty of “whatevers.” A blistering speech detailing “presidential rapists” is jarring and odious. Very little of all this is funny or interesting.

The animated and talented quartet who portrays the witches is made up of Serena Berman, Rachel Franco, Jillian Brocki, and Amanda Centeno. They all have the singsong delivery and vocal fry of stereotypical teenagers down pat, and achieve authenticity with their solid if exaggerated characterizations.

Swati LaPerre is delightfully officious as the principal. Asel Swango is drolly deadpan as the philosophical pet shop clerk.

Scenic designer Shakhed Hadaya’s minimalism is quite effective. Folding tables and chairs, and a desk with a computer are creatively rearranged, representing the locales. Candles lying about and chalk to draw a pentagram on the floor are neat touches. 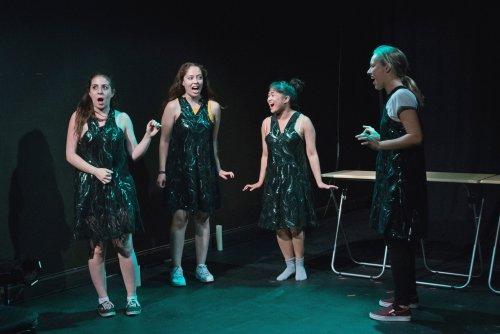 Charlotte Seelig’s lighting design and Manny Rivera’s sound design are both adept and skillfully ranges from the straightforward to the eerie.

With flair, variety and color, Barbara Begley’s costume design vibrantly and realistically depicts all of the characters.

High School Coven is one of five plays that are being presented as part of the inaugural season of the Corkscrew Theater Festival. The noble goal of this collaboration between The Brewing Dept. Theater Company and Fortress Productions is “to increase access to production opportunities for a varied set of early-career artists, especially those who are redefining traditional creative roles and developing work through unusual collaborative models.”

Its strong language would most likely make High School Coven questionable as a public service vehicle for its ideal audience, teenagers.