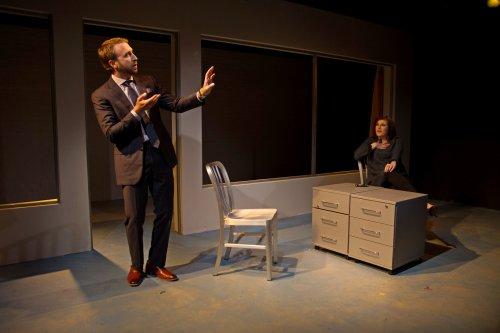 Set in contemporary New York City, we meet the obnoxious, 36-year-old commercial real estate broker Barry Weiss. After yammering on to his equally odious girlfriend about deals with Russians and Chinese, he collapses.

In the hospital it’s revealed that he has an infection that’s eating away at his heart. In rapid succession he gets a heart transplant due to his pulling strings and has a messy romance with the widow of his saintly heart donor. She is a Bayonne, New Jersey, Catholic and Italian-American. He soon temporarily exchanges his blue power suit for the deceased man’s baseball cap and Hawaiian shirt.

Much of the play is like an odd synthesis of 1960’s theatrical satires. There are absurdist shades of Murray Schisgal, Elaine May, and particularly of Jules Feiffer’s Little Murders, laced with Paddy Chayefsky’s lacerating tirades. It eventually becomes clear that it’s meant to be overblown and not at all realistic, and at times is hilarious. A zany Reform rabbi’s irreverent diatribe on faith, and a Darth Vader sight gag are hysterical highlights. Then there’s the girlfriend’s unsettling, casual disclosure that she’s had a double mastectomy. It all recalls the provocatively dark humor of Larry David.

By the time of its poignant twist ending, Heartless Bastard becomes fulfilling. Mr. Shankman has the confidence to be jagged and confusing and pulls it all off with skillfully rendered surrealistic antics. 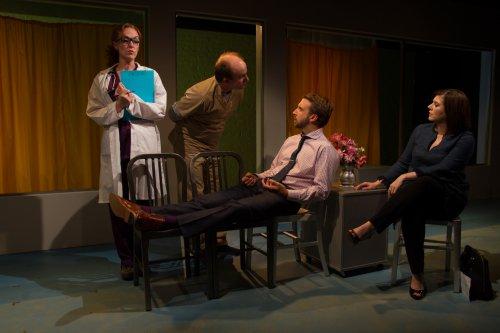 Director Craig J. George’s staging is artfully brisk with the appropriate momentum of fast-paced comedy sketches. Flashes of raw emotion are also sharply emphasized and there are terrific performances.

Combining the pathos of Edie Falco and the comic flair of Laurie Metcalf, Barbra Wengerd is commanding as the widow Lorna Lazzaretto. Whether conveying the character’s melancholy or wit, Ms. Wengerd is at full throttle with her vividly touching and sensual characterization.

Collin Smith exhibits stamina, focus and dry, comedic talent as Barry Weiss. Mr. Smith may not possess the character’s innate flamboyance but he ultimately achieves the depth the part requires with his excellent performance.

In multiple male roles, including that rabbi, Kevin Sims is astonishing. With an array of authentic dialects and varying physiognomy, Mr. Sims rapidly portrays an assortment of wacky doctors and hospital personnel. His counterpart, Courtney Leigh Halford is comparably outstanding with her numerous, daffy female characterizations, with one giddily sounding like Julie Andrews. 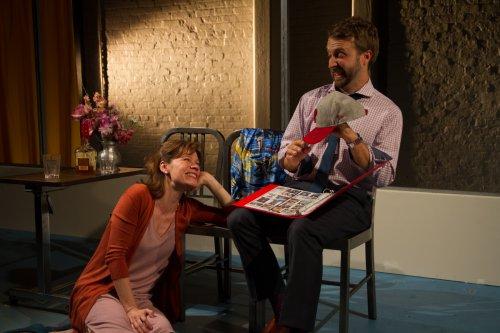 Margaux Maeght’s scenic design is a collection of basic metal chairs and tables that simply represent the various locales by swift rearrangement. A long wall with a picture window with curtains that are perpetually opened and closed frames the presentation.

Due to the inoperable lighting board at the performance attended, lighting designer Cha See’s efforts were not experienced. The show was performed with the house lights on and no effects.

Complicated but entertaining, Heartless Bastard strives for and succeeds at blending the sardonic with thoughtfulness.